An anaesthetist tells all

On surgeons’ personality quirks, exploding patients and what really goes on in operating rooms 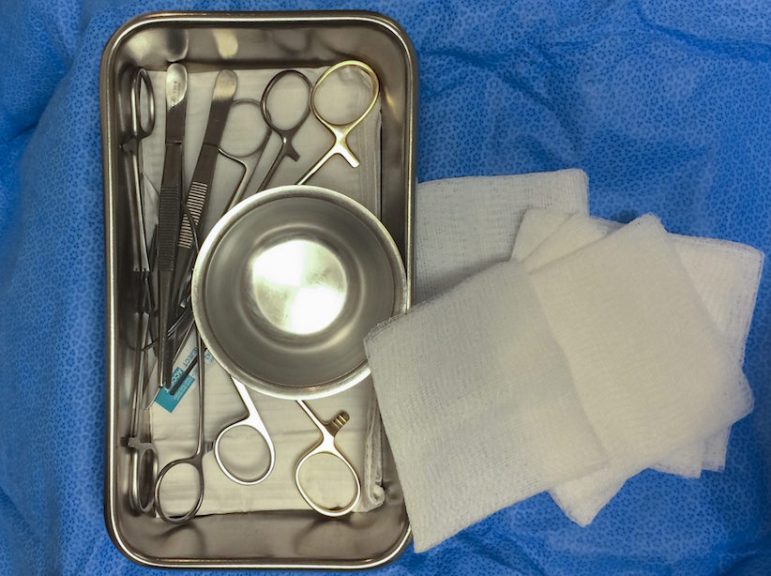 Surgical tools are shown in an operating room in a hospital near Montreal on Thursday, November 23, 2017. (Graham Hughes/CP)

Dr. Paul Whang, 53, who trained at McMaster University in Hamilton and at Toronto’s Mt. Sinai Hospital, has worked as an anaesthetist in a half-dozen Toronto-area hospitals. His specialty offers him a unique perspective in the operating room—a key member of the OR team, but primarily an observer, mainly of the patient but also of the surgeons and nurses. In his 2010 book, Operating Room Confidential, he offers a frank, sometimes surprising and often funny account of his behind-the scenes recollections.

Q: Why did you write this book?
A: Have you read Anthony Bourdain’s Kitchen Confidential? He talks about what really happens behind the kitchen doors. It was raucous and funny and informative. And I realized many people have a certain idea when they watch shows like House or ER, and some of it is true but a lot of it isn’t, and in addition there’s a lot of things and routines and rituals that we go through in the OR. That was the inspiration right there.

Q: Are your colleagues going to like it?
A: Well, they’re getting more and more interested, and sometimes that’s interesting: when we’re working in the OR and something happens, they look at me and say, “Paul, don’t put this in the book.” I have to promise, “Don’t worry! Names will be hidden.”

Q: Surgical mistakes have to be the greatest horror for anybody in your position, and you mention one case when the surgeon cut out a smoker’s good lung, essentially killing him since he had only the one, cancer-filled left lung. How do these things happen?
A: I wasn’t involved in that lung case, but I know it happened. Errors in a hospital are not uncommon. In something like 3.7 per cent of all hospital admissions, there is going to be an error that results in some sort of disability or death or prolonging your stay. It’s not just one error, it’s a series of mistakes that accumulate in the error. If one piece in that chain had been broken, the error wouldn’t have occurred.

Q: Given that mistakes will be made, the important thing is to break that sequence?
A: Yes, yes. Anaesthesia is one of the specialties that has looked into errors and become so much safer. In the ’70s the risk of an anaesthetic mistake causing death was about one in 10,000. Now it’s less than one in 200,000. That can be seen, for example, in my malpractice costs. Malpractice rates in anaesthesia have been going down or have remained steady over the last five years. Back then we considered this high rate and asked specialists from the aviation industry to look into it. Critical incident analysts found common reasons for the things that were happening. Anaesthetic machines weren’t standardized—to turn on the vapour, some machines you’d turn the knob right, some left. Or, you could turn on two anaesthetic vapours at the same time accidentally, so you’d be doubling the anaesthetic vapours that you give somebody. So we standardized the machines. And for the errors that come from a tube disconnecting or being put in the wrong place and the anaesthetist not noticing, we improved monitoring. When you breathe out there’s carbon monoxide, so we put in monitors where an alarm goes off when there was no carbon monoxide, meaning the patient isn’t breathing. Thirdly there were new protocols so you’d check your machine and procedures like the airline industry does.

Q: Those are the checklists just coming into general use?
A: Yes. When somebody’s having an operation, as they come in, we start with “Is this Mr. Smith?” Everybody—anaesthetist, assistant, nurses, surgeon—has to say “Yes.” “Are we doing his right side?” “Yes.” “Are we doing arthroscopy of the knee?” “Yes.” And then, “Are there any special considerations or concerns? Does he have an allergy to penicillin?” And you go through these lists, and everybody asks, “Is everybody ready?” and then you start. That is an example of a checklist that has been shown to reduce error by 30 per cent and mortality by 40 per cent, which is stunning.

Q: One tense area where things often seem to go wrong is with cases involving VIPs. That would be fellow doctors or their spouses or, perhaps worse, lawyers. You had a hard time with a malpractice lawyer. It didn’t help when her last words before going under were “You better do a good job.”
A: Yes! And I was just starting out. I mean, that was my first time in the OR at that hospital and the anaesthetic machine was different from any I’d used. I didn’t know where all the things were, and I wanted to be extra cautious—and not to say, “Hello, this is my first time here”—you know? Because of that, I didn’t do what I would normally do. Trying not to give her too much, I ended up giving her so little painkiller that she woke up with significant soreness. When you’ve got a VIP you are tempted to not do what you normally do, but to put on a little bit of extra gloss. The extra pressure is already bad enough. At one ACL replacement I was at, the surgeon, the best ACL replacement guy in Canada—I’ve seen lots of them and he is slick—was working on the wife of one of my colleagues. Everything was proceeding fine when all of a sudden I heard this scream. We all looked and there on the floor was the ACL graft—the piece you take from the good knee to use in the repaired one—and we all just stared at it for about 10 seconds. We were in shock. Getting infection in the knee, that is terrible, that wrecks your knee, and here it was on the ground, and it’s the wife of one of the anaesthetists. Then the surgeon screams, “Do something with it!” So we’re running around, and somebody picks it up, and we’re soaking it in antibiotics and looking at the books. What had happened, the surgeon said, “It got stuck to my finger,” and he had just flicked his finger, something he’s done thousands of times, and it slid to the end and landed on the floor. Fortunately, everything turned out right. She was put on antibiotics and the knee’s working perfectly but, you know, it was…ahh.

Q: That’s not the normal atmosphere or ritual in the OR.
A: No, no. You come in, everybody…it’s a very team approach, everybody says hello and the surgeon asks for his favourite music. I know one guy who always wants Q107 on and he won’t start until it is, and we have to play it loud. Another will only sew up to one particular piece of music. Closing wounds is prone to ritual: there’s another surgeon who counts her sutures; if she ends on 13, she either takes one out or adds a 14th. During the operation we discuss normal things. Not to say that we’re not serious, because things can happen, but everybody is highly trained and everybody’s loose and everybody tries to have a good time. When OR people say, “Wow, that was a good day today,” they don’t just mean that the surgery went well, they mean everybody was happy, there were good jokes and good music.

Q: And no surprises. I was surprised by your account of explosions in the OR.
A: Yeah, it’s rare but it does occur, when built-up methane and hydrogen gases are set off by the electrocautery. Sometimes the patient is lifted off the bed.

Q: People survive this?
A: Yeah, though there have been people who have died. But if it’s caught and we do emergency surgery, you can cut away the bad, burnt parts and the person will be okay.

Q: What about the people in the OR?
A: You get a singed face. The surgeons, they get hair that has been burned in their eyebrow, and singed faces, yeah.

Q: That would be a particularly bad time for a patient to be awake. How common are the cases when patients remain aware?
A: There are instances—maybe one to six in 1,000—where people actually will feel something, the knife cutting through. I mean, it’s a horrible thing to imagine. Once you go to sleep it’s maintained with vapours, but there are a number of factors that will increase the chance of being aware. One is genetics. Certain people have been shown to have a genetic predisposition to “resist” the amnesic effect of anaesthetics. Just as there is the opposite—Orientals on the whole being very, very sensitive to narcotics, while East Indians, for some reason, are very, very resistant.

Q: You give the aware patients more anaesthesia, of course, both for the pain but also in hope they won’t even remember having been awake. That’s for their sake and yours—you have to have lawsuits on your mind.
A: You maybe give a little, you know, something to help with amnesia, and you ask them after, “Are you okay?” and “Do you remember anything?” And if they do then you talk to them, you reassure them. There have been lawsuits reported about this, although there are also people who actually dream about being awake even though they’re not actually awake, so you have to consider that as well. But, on the other hand, there have been cases where people knew exactly what was going on in terms of the conversation in the room, like the gallbladder patient I know who remembered, word for word, a conversation between the anaesthetist and a nurse about colour preferences in the kitchen.

Q: One thing your catbird seat in the OR has given you is insight into doctors and their personality types. The orthopaedic surgeons certainly stand out, especially the one who said he didn’t feel he’d done a good job unless the blood splatters reached the ceiling.
A: He was only half-joking, let me tell you! For those guys it’s in their personalities: ortho as a perfect combination of carpentry and medicine. They love doing that kind of stuff. They need to feel that way for their work. They gotta get that bone out. I’ve been behind an ether screen, sterile drapes between me and the surgeon, and I’ve been splashed numerous times. He’s hammering away because he’s gotta ram the implant in. Of course his assistants all have these shields around their faces because they know. But I never expect blood, and then here it comes flying right over the screen, slopping on to my notes, on to me, on to my anaesthetic machine. I’ve handed in records that were just covered in blood.

Q: As for your portrait of anaesthesiologists, does that include you?
A: That’s me. You know, most anaesthesiologists are behind-the-scenes guys. Personality characteristics and psychological profiles show us drawn to the Internet, to movies, sort of nerdy type people, not good dressers by any stretch of the imagination.

Q: You wrote you’re deficient in emotional intelligence!
A: Yeah. Slightly. On top of that, though, it’s been shown there’s a high incidence—higher incidence than other specialties—of drug addiction.

Q: But isn’t that directly related to your access to drugs?
A: Sure, access, but maybe too because you’re such an introvert you’re looking for something from within, or stimulus from within or something. I don’t know, that’s just a theory I have as well. But there is a certain personality characteristic, for sure.