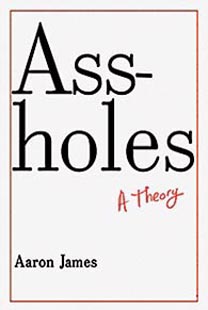 The truly optimistic among us believe that there is no such thing as an asshole. That is to say, the guy who cut you off in traffic or butted in front of you at Starbucks is probably possessed by some temporary affliction (lateness, cluelessness, hangover) that recedes as quickly as it came. In other words, he was acting like an asshole, and that same guy might well hold the door open for you or even save your life 10 minutes later. Aaron James is no such optimist. In fact, the author spends 214 quite convincing pages arguing that “assholeness” is less inattention than a permanent state of mind, and that assholes are more than numerous enough to be called out in book form.

They aren’t mere jerks, and they aren’t rapists or murderers. Rather, James writes, assholes populate the vast moral middle ground between the two. The true asshole, James writes, “is immunized by his sense of entitlement against the complaints of other people.” He is narcissistic, self-absorbed, impolite, and permanently thoughtless to those around him—and it is almost always a him—nearly to the point of sociopathy. (A TV analogy: Steve Carell’s The Office character, Michael Scott, is just a jerk; his inspiration, Ricky Gervais’s David Brent from the original British Office, is an asshole.)

And while they may not stick a shiv in your back, they will gladly manipulate the banking system and bleed you to death that way. Indeed, it is in his chapter “Asshole Capitalism” where James hits his stride. Unlike Communism, which in practice engendered a small, elite group of assholes, James believes unbridled capitalism, stripped of those virtue-engendering values that assholes disdain, is an ideal system through which many assholes can band together to completely tilt the game in their favour. Does he make a case? Hint: his main target is the U.S. banking system, and the disaster it provoked in 2008. It almost writes itself.