Atheists need to understand that religion is here to stay 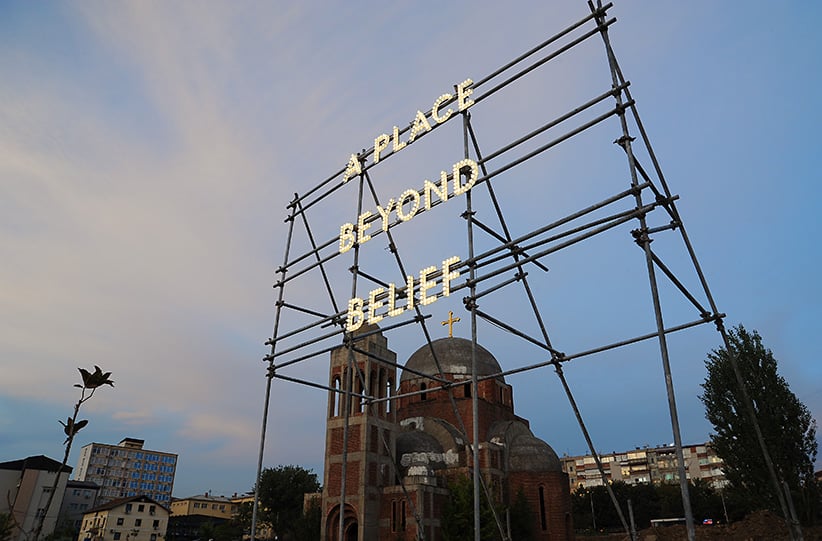 “It was a bit of a flop actually,” laughs Tim Crane about the Bentham Lecture he delivered to the militantly atheist British Humanist Association at University College London in 2007. An atheist himself, Crane had grown increasingly frustrated by what he viewed as widespread misconceptions about religion among his fellow disbelievers, including its perceived lack of staying power. He decided to point out that inconvenient fact to them, not to mention “their exaggerated conception of the role of religion in the creation of the world’s problems.” It turned out to be a memorable evening: “I don’t think I’ve ever given a talk where I got such a cold reaction, outraged huffing with a little applause, followed by some very hostile questions and a chilly dinner at a pizza place where we tried to talk about anything else.” But the experience also prompted a decade of reflection—“I felt it was worth pursuing the topic because I clearly got a reaction”—that resulted in Crane’s elegant 2017 book, The Meaning of Belief.

Crane may be unusual in his ability to command an audience—he is a distinguished British philosopher who is currently a professor at Central European University in Budapest—but he’s hardly alone in believing it’s past time for a new approach to one of modernity’s most intractable issues. Time, in fact, for religious faith and secularist skepticism to reach a peaceable modus vivendi, time for each side to realize the other is not going away. Ever.

Gillian McCann, for one, couldn’t agree more about the “sterility’ of the contemporary standoff, even though the religious studies professor at Nipissing University in North Bay, Ont., couldn’t agree less with most of Crane’s positions. McCann, co-author (with Gitte Bechsgaard) of The Sacred in Exile, says the “Enlightenment narrative”—the idea the Western world has steadily emerged from darkness and superstition to the shining light of reason—dominates any religious-secular discussion. “The only two positions ever allowed are purely secular materialism or crazy religious fanaticism—those are the supposed choices, when the vast majority of people are not like that, not part of either.” Religion’s great, worldwide middle ground is the focus of both books, with McCann and Bechsgaard lamenting the effects of its two-generation-long decline and Crane pointing at its durability as proof of religion’s ineradicable place in human nature. Beliefs and their role in religious faith are at the core of why the mutually incomprehensible “shouting match” only gets louder over time, because—as Crane forcefully argues and McCann and Bechsgaard implicitly accept—dogmatic belief, other than in certain core precepts, matters far less than most atheists and even some faithful fully realize.

All religions are an attempt to align with the transcendent, and it’s that sense of something beyond our ken, not the specifics of cosmological belief, that is the root of the human religious impulse, according to Crane. “But among the people I’m criticizing—the New Atheists like Richard Dawkins and Daniel Dennett—the heart of their view is a specific conception of cosmology. They credit religious believers with having primitive and superstitious but very precise views that can be summed up as, ‘God created the world in six days and if we do this and don’t do that, we’ll go to heaven.’”

His fellow atheists, Crane says, think that by providing scientific explanations of natural phenomena—demonstrating, for instance, that the Earth is far older than the chronology that underlines the Bible suggests—they are demolishing the key supports of religious faith. “But I think a lot of what people actually believe is much less specific, and much more adaptable—which is not to say they think none of it is “real” or that it’s all metaphorical, just that in a significant sense, very deeply set in humans, having faith means committing yourself to a way of looking at the world that proclaims, ‘This can’t be all there is.’”

Church history and social science research back Crane’s claims about the protean nature of religious belief. There is enormous Christian variety, for instance, spanning time, geography and denominations, over how literally to take the words of the Biblical Book of Genesis, with the only unifying theme being that God created humans, endowing them with purpose and meaning. That is the same belief that lies behind the religious response to evolution, which is far more nuanced than skeptics realize.

For decades, report sociologists Elaine Howard Ecklund and Christopher Scheitle in their new book, Religion vs. Science: What Religious People Really Think, Gallup polls have shown about 40 per cent of American respondents will agree with the statement that God created humans as they now are within the past 10,000 years. But when Ecklund and Scheitle, whose aim was also to find some possibility of dialogue between believers and non-believers, drilled down into that response—through follow-up surveys and interviews—they found relatively few diehard adherents of the young-Earth hypothesis. For a majority of the Muslims, Jews and Christians, including evangelical Americans, who answered “Yes,” it often seemed the best of a bad set of options. They showed themselves as versed in evolutionary theory as their secular neighbours and relatively open to the idea—as long as God was involved (as initiator or guide) and the special purpose of human life recognized. That might enrage atheistic scientists, for whom recognition of the impersonal, chance-driven nature of evolution is necessary for understanding life on Earth, but it’s “massively improbable,” says Crane, that most humans will ever really abandon their intuitive belief that our lives are infused with larger meaning. “Religious ‘realities’ transform over time, but the search for the transcendent continues.”

McCann and Bechsgaard also focus on the transcendent—although, for them, weakened and inchoate—form in which it survives after two generations of the world’s first “post-transcendent” society. Since the 1960s, what Western culture once took for granted—the role of religious faith in forming personal identity, and the guidance it once provided for finding that sought-after sense of meaning, for conducting relationships with family, community and nature, and for coping with suffering and death—has been replaced by “nothing,” says McCann. “We have lost a lot. You can see the result in these skyrocketing rates of anxiety that you could have logically predicted. I see it in my students, just huge amounts of basic existential anxiety.”

The search for the transcendent takes on specific religious form, Crane and McCann concur, through faith’s other sustaining factor, ritual. McCann stresses how rituals link across generations as well as communities. “In my own family, I’ve seen, ‘We’re not going to do Christmas this year, we’re going to Florida,’ and the family starts to drift because maybe I only see my cousins on those days.” As a teacher, though, McCann particularly mourns the loss of “maturation rites such as confirmation rituals. I’ve talked to my students about this. They don’t know what it is to be an adult anymore. There’s no initiation into adulthood.”

READ: The invention of God

Even the irreligious increasingly recognize the importance of shared ritualized experience in building community, as witnessed by the founding of Calgary’s Secular Church and philosopher Alain de Botton’s temple for atheists in London. But Crane is skeptical of their long-term success. Rituals do have to begin somewhere, and some religious traditions, like Pentecostalism, privilege spontaneity, but in the older world faiths rituals derive much of their bonding power from their antiquity. They link past and present, with practitioners knowing that their ancestors—in some cases for centuries—did exactly the same. Even the archaic language taps into the sense of the sacred and transcendental, and the long history of the great religious rituals is one paradoxical reason they can launch new but accepted rites: the practice of bringing pets to church for blessing on the feast day of St. Francis of Assisi is growing exponentially across the various denominations.

Partly because personal autonomy is one of the highest secular values, atheists find it hard to match the religious in crafting new and lasting communal rites. “You have to believe what’s going on in the ritual, don’t you?” asks Crane. “There’s something empty about rites made up to mimic someone else’s. There has to be an organic quality.” (The new openness to animal rights among Christian churches appeals to some, but not all, secularists: when a New Jersey animal shelter asked a Catholic priest to bless its residents, in November the American Atheists group filed a lawsuit against it on the grounds religion has no place in state-funded animal shelters.)

For all their differences—McCann believes the public square needs religion while Crane is (cautiously) prepared to tolerate its presence there—the two scholars are actually moving towards middle ground. That in itself is a remarkable development in a polarizing debate that has spent decades trying to demolish the very idea of middle ground. But the public square looks different in North America than it does across the Atlantic. For Crane, as for most Europeans, the question of religion in public life essentially turns on how, and to what extent, to accommodate Islam. He hasn’t yet formalized his thoughts on that loaded topic, which will be the subject of a future book. The Meaning of Belief concentrates instead on how atheists could incorporate religious toleration into their individual lives. To that end, it concludes with a story—complete with lessons learned—that turns the personal into the political.

Crane was at a Jewish funeral some years ago, for a colleague who had died young and in good health. “It was a day or two after the death, the sorrow still raw, more than a hundred people there, mid-winter in Cambridge,” he recalls, when there came one of those moments that are important to Crane and “some of my more atheistic” fellow philosophers. Namely, whether “to go along with a religious practice that might be the expression of a belief not held.” Someone passed around a bag of yarmulkes and everyone there not already wearing one—including Crane—took one and put it on. The right thing to do was crystal clear to the philosopher. “You could see that rituals, even rituals involving things you don’t believe, are bigger than you and are answering to needs in people that are real. I felt very small in the light of this great ritual tradition: the suffering, grieving and mourning, the thought, ‘Here we are again.’ What a funny reaction to this to say, ‘Well, I can’t [put on the skullcap], because I don’t think the arguments for the existence of God are any good.’ Why would that even be the question?”