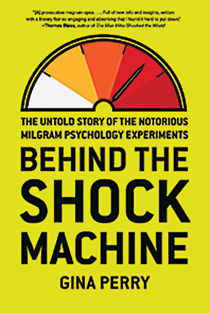 Behind The Shock Machine: The Untold Story Of The Notorious Milgram Psychology Experiments

It’s been half a century since Yale psychologist Stanley Milgram convinced two-thirds of his volunteer test subjects to apply increasingly more powerful electric shocks—real shocks as far as the subjects knew, but in reality fake—to actors pretending to be other volunteers, when the latter failed to answer quiz questions correctly. The Milgram experiments have become the best known in the history of social psychology, and not just within the profession. It’s now an article of faith in the popular mind that inner Nazis lurk—well, maybe not within us, but certainly in our neighbours—everywhere, awaiting only an authority figure’s command to be let loose. (References to the experiments have often carried a subtext, too: they were borderline ethical at the time, and way beyond the pale now, but at least somebody did this in the bad old days, and now we know the truth.)

But popular memory always simplifies, and Perry’s story proves far more complex. To start with, Milgram was—in layman’s terms—nuts. He began the shock tests without any clear theory of what he was aiming to prove, and had to cobble it together afterwards, some of which he gleaned from a pamphlet entitled, “How to Train Your Dog.” He refused to consider that many people took it as a given that the stated aim of any psychological test was never its true purpose: A large proportion of the volunteers simply didn’t believe Yale would allow people to administer potentially fatal shocks. Among those who did accept what Milgram told them, far fewer than the 65 per cent he claimed actually continued to up the voltage. Worst of all, for fear the truth would leak out to other prospective volunteers, Milgram refused to fully debrief his subjects, many of whom were haunted for years by guilt at what they thought they had done. It’s rare that an original event as compelling as the Milgram experiments can be eclipsed by later commentary, but that’s exactly what Perry manages in her painstaking and engrossing exploration of what really went on.