A book with a compelling premise that ultimately fails to deliver 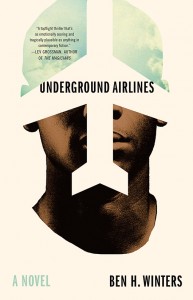 What if slavery never ended in the United States? That’s the question at the heart of Underground Airlines, a thriller that follows black bounty hunter Victor as he pursues escaped slaves. Winters constructs a parallel reality in which the Civil War was never fought and a series of political compromises resulted in four states having slaves and the rest agreeing to return runaways.

Using an alternate reality to make a political point has a long literary tradition. Ursula K. Le Guin changed how a generation saw gender with her 1969 novel, The Left Hand of Darkness, in which the characters have no fixed gender identity. Philip K. Dick’s 1962 book, The Man in the High Castle, explores a world in which the Axis won the Second World War and conquered the U.S. It challenged the way Americans viewed their military domination of Japan and Germany.

Both Dick’s and Le Guin’s novels are held up as classics because, in addition to building a believable architecture for their alternate reality, they are also briskly plotted and written. Underground Airlines has hints of both but ultimately pales in comparison. The narrative is clumsily divided into three sections. The best is the first, which runs 202 pages, where Winters builds suspense through carefully withholding key details about characters’ motivations. The second section, at 83 pages, feels rushed, and the third, a mere 24 pages, seems an afterthought designed to set things up for a sequel.

Winters devotes many pages to an exploration of Victor’s psyche but devotes few to his key secondary characters, whose actions seem devices to move the plot forward. Some passages—such as when Victor visits an inner-city ghetto where the poorest blacks live—are vivid and heart-wrenching. But the overall plot is rather disjointed, and that detracts from a brilliant and timely idea.