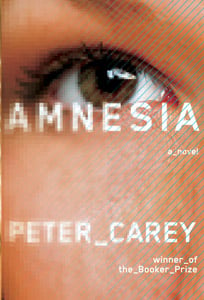 Readers of Theft: A Love Story, Peter Carey’s 2006 novel perfectly skewering the concept of putting a price on fine art, will recognize Felix Moore, the messy protagonist of Amnesia. Like Michael “Butcher” Boone, Theft’s resident artist and antihero, Moore is a once-grand, now-disgraced misfit doomed to the purgatory of the Australian outback to redeem himself by plying his trade under duress. A journalist whose fatal mistake was to manufacture quotes, a practice he has engaged in proudly for his entire career, he’s found guilty of defamation. The offending book is pulped, then Moore accidentally burns his house down.

Ostensibly set on redeeming Moore in the public eye, his barrister and friend, Woody Townes, forces his client into a rather dreamy situation: Write the life story of Gabrielle Bailleux, the daughter of a well-known actress and a leftist MP. Bailleux is on the lam for having blessed the American government’s computer infrastructure with a particularly virulent virus. The book is meant to be an instant bestseller, and give Gabrielle a sympathetic lustre when she eventually turns herself in. “You thought you were f–ked,” Woody says to Felix shortly after the latter burns down his home when burning his own book. “Now you’re going to be top dog.”

The story, already teetering by page 10, pulls us through the biggest constitutional crisis in Australia’s history, when prime minister Gough Witlam was turfed from office by his conservative opponent. Moore remains bitter at what he (like much of his generation) sees as a coup against a truly left-wing PM perpetuated by the CIA and Rupert Murdoch. It’s why Bailleux’s attack against the Americans nearly four decades later awakens his sense of journalistic outrage. (It helps that Moore always wanted to schtupp Gabby’s mom.) Amnesia is classic Carey: barely contained, typically bonkers and rife with hinted-at twists, and larger philosophical questions: Is Townes himself CIA? Is Bailleux but a useful idiot? Is the Australian left forever doomed? Will liquor be the death of Moore? As with Theft, Amnesia is far more than the sum of its intricate moving parts.