Book review: a biography of the Bhagavad Gita 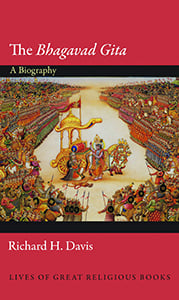 THE BHAGAVAD GITA: A BIOGRAPHY

Nestled within the epic Hindu scripture the Mahabharata is a portion known as the Bhagavad Gita, literally the Song of the Lord. Two vast armies gather for battle, an almost inconceivable 18-day slaughter in which, according to a survivor, precisely 1,660,020,000 men perish—an exquisite indication of how mathematically oriented was the civilization that flourished in the Indus Valley. Arjuna, one of the Pandava brothers preparing to take on their cousins, usurpers of their father’s throne, is troubled by the thought of the deaths to come. He asks his charioteer to stop between the armies while he wrestles with his conscience. The two commence to talk, eventually tackling just about every strand of philosophical and religious thought roiling their culture. It’s called the Song of the Lord, because the charioteer turns out to be Krishna himself, perhaps Hinduism’s most beloved avatar of the Godhead.

And a skilled theological expositor too. Arjuna’s anguish comes from the essence of civil war: he has a duty to fight and a duty to protect his kin, many of whom are on the other side. Krishna discusses what is right and proper—Arjuna will merely be killing bodies, not immortal souls; as long as he is indifferent to the outcome (his death or theirs), he commits no fault—and navigates through contending paths on how to reach such a state of enlightenment.

It’s as tightly knit and as powerfully evocative as anything human religious sensibility has created. And in what many Hindus have seen as the Gita’s capstone, Krishna effectively declares the limitations of reason with an antinomian appeal to pure faith. In a text first written down about 2,000 years ago, he tells Arjuna, as new gods or old ones in new ways were contemporaneously telling people all over the Old World: You are loved, love me in turn, and all will be well.

It’s enough to convince Arjuna to take up his duty in the great battle, and enough to give the Gita the kind of afterlife the Book of Genesis shares. Like all the great religious books featured in this superb series from Princeton University Press, the Gita has transcended the circumstances of its birth. Rival schools of Hindu theology have risen from various turns of Krishna’s phrases, while Westerners have seen echoes of their own traditions. In modern India, Gandhi thought the Gita reflected the eternal battle between light and dark in every human heart, and in the drive for Indian independence, even secular nationalists championed it as a patriotic text. The Gita and the moral issues it raises are still alive, even for those who believe the charioteer was just a charioteer.