Book review: A most Irish novel

This strangely mesmerizing tale of an Irish widow is a literary triumph, writes Anne Kingston 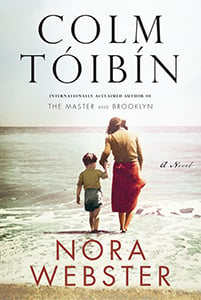 This tale of a 40-year-old widow living in an Irish hamlet in the late ’60s is a strangely mesmerizing literary triumph. What makes it so is the muted, masterful manner in which Tóibín articulates the mundane day-to-day trials of a woman grieving her husband’s death. But be forewarned: Nora Webster is a glacially paced, 373-page book whose major plot points include its middle-aged protagonist painting her living-room ceiling. Anyone who requires fiction to deliver high drama or modern bells and whistles is advised to walk away now.

The novel begins months after the death of Nora’s beloved husband, Maurice, a schoolteacher who left her with two young sons and two older daughters. Nora’s grief and money worries eclipse all at the outset, even her sons’ heartbreaking devastation, as she muddles through without him.

Throughout, Tóibín’s prose is as plain-spoken and unsentimental as his heroine; he deftly captures the rhythms and claustrophobia of small-town Irish life, a place of constant judgment. Nora, a prickly, fretful, and not always sympathetic character, fits right in; for her, repression is a virtue. When she visits her unhappy son at boarding school and refuses to take him home, modern parents will be baffled (children of Irish mothers, however, may not be).

As Nora slowly emerges as a formidable character able to stand up to the priests who put her son back a grade, and as she rediscovers her love of music, Tóibín’s narrative picks up. The focus on Nora’s interior world that gives the book a timeless quality at the outset then pans outward—referencing the moon landing and the Troubles. In time, Nora reconciles with the dead—“they would all take their turn in the world, shadows within shadows” and learns what it is to be alone: “It was not this solitude she had been going through, nor the moments when she felt his death like a shock to her system, as though she had been in a car accident, it was this wandering in a sea of people with the anchor lifted and all of it oddly pointless and confusing.” That Nora’s revelations seamlessly becomes the reader’s too is Tóibín’s triumph.