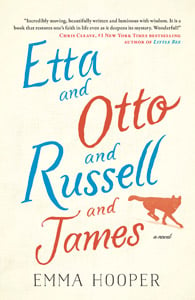 Etta and Otto and Russell and James

Etta Gloria Kinnick wants to see the water. So the 82-year-old sets off before sunrise, leaving her husband, Otto, behind, and starts walking east from Saskatchewan toward Halifax. As she’s walking, readers learn about Etta’s and Otto’s lives: Etta lost her only sister when she was a teenager and Otto, one of 15 children, left the family farm to fight in the Second World War. And we learn about Russell, their closest friend and Etta’s one-time lover, who, as an old man, is obsessed with watching for deer on his farm.

Hooper’s much-anticipated ﬁrst novel moves effortlessly between present day and the past: Sections set in the past show the dust and dryness of the Prairies in the 1930s and 1940s, and how both the Great Depression and the war (Etta, trained as a teacher, takes work in a munitions factory; Otto fights; Russell, who has a leg injury, lives in a liminal space) compel the characters to shape their lives through the constraints of their time.

The present day affords Etta, Otto and Russell the capacity to make choices they probably would not have been able to earlier. Etta becomes a sort of celebrity on her walk, likely because people see in her the ability to follow one’s desires at any age, no matter the circumstances. (Etta is showing signs of dementia; she cannot remember everything and imagines James, the other title character, a talking coyote who keeps her company on her journey.) Russell, worried about Etta, starts his own journey by tracking Etta but ends up going north, to trail caribou and follow his own longing. Otto buys 326 copies of the newspaper that carries Etta’s story about walking east, cuts out Etta’s photo 326 times, and uses the rest of the newspaper to make life-sized papier mâché animals for Etta upon her return: deer, an owl, rabbits and so on.

If this book has a miss, it’s that there isn’t a lot about the time between the war and the present day, leaving the reader to make assumptions about the lives of the characters as younger adults. But Hooper is a surprising and imaginative writer—descriptions of events and emotions are delightfully odd. The novel is a satisfying, evocative read that brings a fresh lens to traditional themes of love, war and, ultimately, taking the journey of a lifetime.