A green thumbs up: Plants are smarter than you think

The humble and neglected study of plants reveals a surprising intelligence 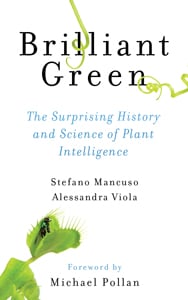 BRILLIANT GREEN: THE SURPRISING HISTORY AND SCIENCE OF PLANT INTELLIGENCE

In the still-influential Renaissance concept of the pyramid of life, humans are at the peak and plants just a short step above rocks: alive, but essentially inert. Unlike animals, they have no senses. Unlike us, they have no intelligence or emotions. Except that this is utterly incorrect, Mancuso, an Italian biologist, argues in Brilliant Green.

Mancuso applies concepts from animal and human biology to the more humble and neglected study of plants. Plants don’t move at a speed we can see or communicate in a way we can perceive, but, he says, they have all five of our senses and a few more, such as the ability to gauge humidity. They react to sound vibrations, they “taste” and “smell” volatile chemicals, they “see” sunlight and bend toward it, and may snap their leaves closed after feeling the touch of an insect’s feet.

His approach has divided experts. The very name of the controversial discipline Mancuso co-founded, plant neurobiology, gets many scientists’ hackles up, and their skepticism is understandable. In the 1960s, Cleve Backster famously conducted experiments—never successfully repeated in a laboratory setting—in which he hooked houseplants up to a polygraph machine and claimed to observe a “stress response” after assaulting them, burning their leaves, even just thinking negative thoughts around them. Plant biologists have been refuting his theory of botanical ESP ever since.

Plants aren’t telepathic, but they do respond to external stimuli, including burning, in ways we can measure. Mancuso cites dozens of studies (not all yet replicated by other researchers) that illuminate the incredible, hidden world of plant communication and behaviour. The lima bean, to take just one example, has an ingenious system of self-defence. When attacked by a certain kind of spider mite, it secretes a chemical that attracts a different kind of mite—a bigger, carnivorous one that eats the plant’s predator. Taken together, plants’ amazing abilities make it fair to call them not just complex and sophisticated, but intelligent, Mancuso says.

Science has been slow to accept this, perhaps because of the ubiquitous belief that there’s something exceptional about human intelligence. In reality, although our evolutionary paths diverged 500 million years ago, plants are made of the same stuff as we are, and they’re adapted to do many of the same tasks, albeit in a totally different way. Mancuso advocates for a second Copernican revolution, of sorts. Just as medieval people had to concede that the stars and planets don’t orbit Earth, we must accept that the living world doesn’t revolve around us.