Book review: The triumph of seeds

In his book, Hanson asks us to consider something as seemingly mundane as seeds for the complex marvel that it is 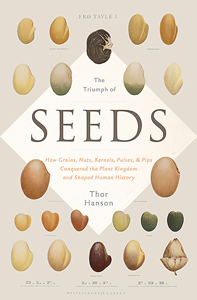 THE TRIUMPH OF SEEDS

Readers can be forgiven for rolling their eyes at this book, which looks like the latest addition to the genre of sweeping epics on the history of pedestrian objects—Elizabeth Abbott’s Sugar: A Bittersweet History, anything by Mark Kurlansky, Hanson’s own Feathers: The Evolution of a Natural Miracle. The shtick is at risk of going stale. If everything holds the secret story of the universe, can anything?

Yes, Hanson, a biologist, shows persuasively. Seeds can. Seeds are special. Seed-producing plants arose suddenly, as evolutionary changes go. They ushered in an explosion of complexity that saw Devonian-age flora—which consisted basically of ferns, mosses and floating green goo—blossom into the hundreds of thousands of higher plants that dominate our planet today. Seeds, he argues, are the Coca-Cola of the natural world: they’re everywhere. “Natural selection, like commerce, rewards a good product,” he writes.

The fundamental functions of seeds are well-known to any student of introductory biology: they nourish a developing plant, preserve it from the elements and spread its genetic material far and wide. These facts take on a new resonance with Hanson in the role of genial professor. Using a helpful metaphor (a seed is a baby plant, in a box, with its lunch), he explains why seeds were revolutionary for our species—and for virtually every other species on Earth.

For example, a simple seed-pollen system of sexual reproduction makes it easy to selectively breed for desirable traits. That’s exactly what ancient humans did to enhance the nutrient-rich seeds of grasses (a.k.a. grains); creating a plentiful, storable food source and enabling such innovations as taxes, division of labour and civilization.

Life would be utterly dull without the chemicals seeds produce. Caffeine’s function in nature is to repel plants’ predators. But its presence in a trendy restorative drink made from Coffea seeds helped early modern Europe kick its beer-for-breakfast habit and set to work industrializing. On the other hand, ricin, an ultra-toxic protein found in the seed of the castor oil plant, was used for surreptitious murder in the former Soviet Union. It’s now being studied for its potential to kill cancer cells. And if the cotton plant had not evolved fluffy seeds that can ride on the wind to distant fertile ground, would there have been a British Empire? A transatlantic slave trade? An American Civil War? It’s a mindboggling thought experiment.

Almost everything in the living world is awesome and improbable if you think about it hard enough. That’s the author’s aim here: to get us to consider something as seemingly mundane as a seed for the complex marvel that it is.