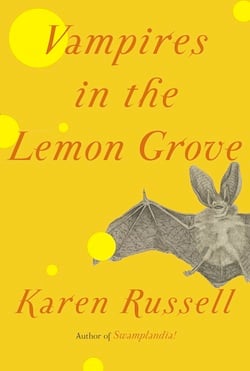 The Florida-born Russell burst onto the scene in 2006 as a Granta- and New Yorker-feted enfant magnifique at age 25; the title of her debut collection, St. Mary’s Home for Girls Raised by Wolves, reveals her fascination with how unruly nature can warp mundane reality. Vampires’ title story features a fanged couple who, tired of coffins and killing, slake their thirst with fresh citrus in Sorrento. Elsewhere, we read about kleptomaniac seagulls, tailgating partiers in the Antarctic for whom the food chain is a tournament, and U.S. presidents reincarnated as horses, reduced to giving themselves titles such as Commanding General of the Standing Chickens.

Russell’s protagonists are poised on the cusp of life-changing events; sometimes, in a nod to avowed influence Ray Bradbury, they’re adolescent boys, and often there’s a Gothic suggestion that the strangeness of their surroundings is a projection of their inner turmoil. Her coming-of-age tales also read, at times, like allegories, satires and surreal escapades, set in a defamiliarized America where cars can acquire “a sort of doomed mastodon glamour, shaggy with snow” and a crop may grow up like “the future sprouting new fur.” Her language draws attention to itself but doesn’t threaten to capsize her tales—as it sometimes did in her debut novel, the Pulitzer-nominated Swamplandia! (2011). She uses her oddball premises to offer new angles on venerable themes such as memory, time, friendship, greed and love. And though the short story is often considered an inferior form to the novel, Russell’s restless imagination proves its possibilities haven’t yet been sucked dry.