Review: Brain on Fire: My Month of Madness 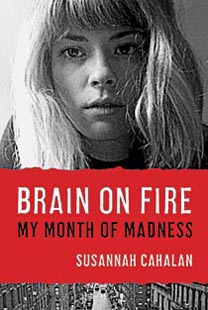 In the early months of 2009, 24-year-old New York Post reporter Susannah Cahalan began experiencing the sort of symptoms that once would have had her admitted to an asylum, or subjected to an exorcism: paranoia, hallucinations, numbness on one side, wild mood swings, manic behaviour and seizures.

The first doctors she saw reported that all of her tests were normal. One even suggested she was partying too much and was going through alcohol withdrawal. With her parents’ forceful intervention, she was admitted to a top New York hospital, where she was poked and prodded and declared an “escape risk.” Then, on the brink of catatonia, she was saved by her own Dr. House: a brilliant, compassionate neurologist, Dr. Souhel Najjar, who astutely saw her brain was inflamed and diagnosed her with “anti-NMDA-receptor anti-immune encephalitis.” Cahalan’s was only the 217th case in the world; since then, there have been thousands more.

Brain on Fire is a riveting read—part medical procedural, part love story, part meditation on the human brain that questions how many “insanity” cases have been misdiagnosed. It also redefines the “memoir” genre: because Cahalan can’t remember her 28-day hospital stay, she reconstructs events forensically based on doctors’ reports, her own scribbles and accounts of friends and family, as well as hospital video.

The story has no neat endings, intentionally so. What caused Cahalan’s illness remains a mystery, as does what parts of her old self are forever lost because of it. Her recovery was slow and difficult. Yet Cahalan knows she was lucky—to chance upon her neurologists, to have her $1-million treatment covered by insurance, to have a boyfriend and family who were unwavering advocates. Her book is a testament to the complexity and fragility of neural function, and how it shapes who we are. And also to the strengths and failures of the medical system, which still has so much more to learn.