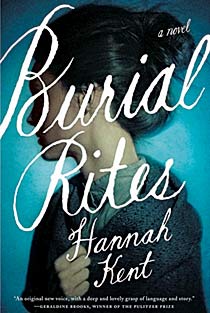 Based on a true story and set in the icy moors of Iceland, this novel centres on the imminent beheading of Agnes Magnúsdóttir, an orphan farmhand, who along with two others is charged with the bloody death of two men in 1828. Agnes is sent to the Kornsá farm to wait for her execution under the care of the farmer, his wife and two daughters. Her initial contact with the family does not bode well—they are terrified of housing a murderer. Her only request is spiritual guidance from the young novice priest Tóti. The priest and the family who live with Agnes as she awaits death are her only opportunities to confess, and author Hannah Kent uses these testimonials to great effect to conjure the voice of the female prisoner.

Kent heard of the execution when she went on a school exchange to Iceland, where the legend of Agnes and her killings is shrouded in mystery. One of the dead men, Natan, a soothsayer and medicine man, was Agnes’s lover. A fellow killer was another young woman, Sigga, of similar station, who somehow avoided Agnes’s fate. Was it a crime of passion, betrayal or a woeful mistake?

The book is rife with northern symbolism—white snow, black crows, red blood, grey skies, flashes of silver and smoke. Kent brings the blackened world of Agnes and her handlers to life, expertly crafting a sense of the injustices and isolation that plague the Icelandic community. She makes good use of superstition, pitting Christian deliverance and truth against pagan prophecy and dreams.

There is a clear nod to the Icelandic sagas, in which characters are based partly in reality, partly in mythology. Sparse historical records are interspersed among the richly crafted dialogue, making for beautifully convincing details. From a seasoned author Burial Rites would be considered a fine book; for first-time novelist Kent it is an astonishing accomplishment, proving she is one to watch in the coming years.