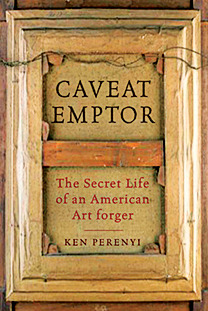 Original paintings, unlike music or dance, are artistic commodities that can be owned. With a masterpiece on your wall, that connection to something genius is tangible: just reach out and touch the paint. And those with no genius but cash will pay well for that one degree of separation from brilliance.

For nearly three decades, Ken Perenyi capitalized on that popular desire, passing off his own reproductions as the real thing and collecting a small fortune in the process. Starting in New Jersey with some counterculture art dilettantes at a squalid version of Warhol’s Factory, Perenyi became involved in small-time crookery while developing an appreciation for women, leisure and creativity. Taking up with an art restorer to learn the details of the trade, forgery was a natural next step. Soon he became an expert in 18th- and 19th-century American art reproduction, creating “Buttersworths” and “Heades” that would pop up on auction blocks at Christie’s and Sotheby’s—one fetching $700,000. When the feds came knocking 10 years ago, Perenyi changed gears, selling his work as known reproductions and no charges were laid.

As the statute of limitations on his case has expired, Perenyi freely admits to a life of lying and petty thievery. He has little remorse for duping the ivory tower residents of the art industry who, he believes, dictate the inconsistent rules of what is considered worthy and worthless. Perhaps the joy his work could inspire in observers, and the homage he felt he paid to the masters, stayed his guilt. “If the counterfeit were a good one,” Picasso reportedly once said, “I should be delighted. I’d sit down straight away and sign it.”

As with most books not written by writers, the events are more interesting than the prose—exclamation marks are liberally used. But in describing his deceit Perenyi remains humble, careful to portray himself as someone able to add to a master’s canon—and not a master himself.