Cervantes: The Man Who Invented Fiction

The lessons we can learn from Cervantes and his fiction are still relevant, this new biography shows 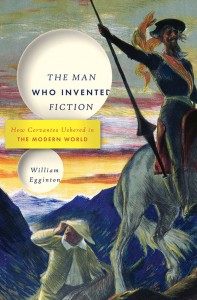 THE MAN WHO INVENTED FICTION

In 1609, Philip III of Spain decreed that all descendants of the Moors should leave the country—a move popular with Spain’s Christians. Sound familiar? Four hundred years after Miguel de Cervantes’s death, the lessons we can learn from his fiction are still relevant.

In this biography of Cervantes, Egginton argues that the author’s experiences, and those of his country, influenced his depictions of the would-be knight in Don Quixote—widely acknowledged as the world’s first novel—and those around him. Just as Cervantes’s fiction was preoccupied by the distance between lofty, chivalric ideals and reality, so too was his life besieged by irony. Having enlisted as a naval soldier in hopes of accruing enough honour to overturn a sentence for duelling—which entailed the loss of his right hand—he lost the use of his left hand in battle. He spent five years in Algiers as a slave, where he was well-treated because his captors mistakenly believed his family was rich. Years later, working as a tax collector, he was conned by a banker, and ended up in debtor’s prison.

Don Quixote offered a vision of administrative absurdity. Readers were invited to project themselves inside the minds of characters who appear real, in a process we now take for granted but was strikingly new in the early 17th century. For Egginton, fiction, as Cervantes conceived it, tells “the subjective truths that can be revealed only when we suspend our disbelief and imagine ourselves as someone completely different,” whether it be a long-suffering servant or a downtrodden exile.

Where Egginton’s summaries of lesser-known works and close readings might get a little academic, his book offers a spirited tribute to the power of fiction.