Charles and David Koch: most despised monsters for the left 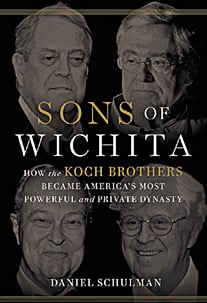 SONS OF WICHITA: HOW THE KOCH BROTHERS BECAME AMERICA’S MOST POWERFUL AND PRIVATE DYNASTY

There can be no question about it: Charles and David Koch are now the most despised monsters in the demonology of the North American left. They are subjects of a level of paranoia and vilification that perhaps only Richard Nixon would be capable of appreciating. Try a Twitter search for “Koch brothers.” I find them, in a matter of a few hours, blamed for the Iraq war, described as “evil incarnate,” accused by the press of a “plantation mentality,” and charged with “buying the Supreme Court” for the “GOP/NRA.” A supporter asks ironically if there are any Koch sisters to hate, in the interest of gender equality. (There aren’t.)

Their prominence is a bit of an accident, as Mother Jones senior editor Daniel Schulman documents in his biography of the duo who built the huge, ubiquitous conglomerate Koch Industries. The Kochs are part of a lineage of American oil-biz players with closely held fortunes and an itch for politics, but they are better known than, say, Herman and George Brown or Clint Murchison. The only reason this is so is that instead of perpetrating horrifying, untraceable crimes behind the scenes on behalf of puppet candidates, the Kochs have operated as deep-pocketed advocates of a small-government philosophy, pouring cash into intellectual organizations like the Cato Institute.

That is how it worked, anyway, for about 20 years. The Kochs have now become identified with the Republican party; the financial crisis and the “Tea Party” reaction, in Schulman’s account, pulled them into horse-race politics in sort of the way railroad timetables and war plans pulled peaceable nations into the First World War.

Schulman’s book is fun as a classic American business clan story—remorseless dad constantly setting the boys against each other, mother weeping upstairs: you know the drill. But Schulman’s careful research and excruciating commitment to fairness raise the effort to another level. In his book you’ll find alleged war-lover Charles writing “Let’s get out of Vietnam now” op-eds in 1968 and being savaged by National Review in 1979. You’ll see brother David standing as Libertarian candidate for vice-president, preaching a gay-rights, drug-legalization gospel during the apotheosis of Reaganism. “Everything you know about X is wrong” may be a terrible cliché, but if the Koch brothers are really the devil, Sons of Wichita is their Paradise Lost.