Cheers to a book for beer aficionados 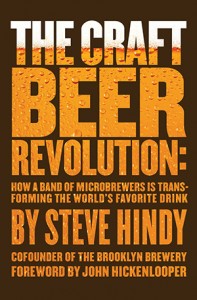 THE CRAFT BEER REVOLUTION: HOW A BAND OF MICROBREWERS IS TRANSFORMING THE WORLD’S FAVORITE DRINK

In 2010, when a bill to increase regulation of beer distribution came to Congress, those who supported it sought, Steve Hindy writes, to “cast themselves as the only safeguard against alcohol-inspired anarchy on the streets of the United States.” Ontarians may find this curiously familiar: as the foreign-owned Beer Store clings desperately to its own near-monopoly with fear-mongering ads, it’s worth reading of earlier battles between beer barons and their harried subjects.

Hindy, a co-founder of the Brooklyn Brewery (the 18th-largest seller, by volume, in the U.S.), is particularly well equipped to tell the tale of the American craft beer movement, which from 1965 to 2013 grew from one microbrewery (Anchor, in San Francisco) to 2,594. He’s a former journalist who was inspired by homebrewers while stationed in the Middle East in the ’80s, and he entered the market during that decade’s first-wave craft-beer boom; he knows first-hand the curious tales of craft brewers’ odd career paths, and he knows all of the big players. Not only does he show us how David stunned Goliath and took away some of his market share, but also how David developed growing pains, and realized that at times an uneasy alliance with a chastened Goliath could in fact be beneficial. The revolutionaries, he says, will one day have to put down their “creed” and work together with larger brewers “for the overall health of the beer industry.”

Not everyone agrees with him, and he snipes amusingly at his adversaries—particularly Jim Koch of the Boston Beer Company, whom he paints as an anti-heroic craft-brew pioneer looking to blaze a trail for himself and then set fire to it so no one could follow him—even at his own brewery: “Koch has said he needs no succession plan because he plans to live forever.” Hindy depicts vitriolic, alcohol-fuelled brewers’ meetings—proof that while great ideas are hatched at the pub, the fine print shouldn’t be. Skim through the denser passages (beer-association minutiae may drive you to drink) and the frothy beer-nerd hagiographies of Hindy’s friends, and you’ll find a tale bubbling with conflict about how an industry older than Canada’s own has spread good beer, fought suppressive laws, and come of age. And sorry, Beer Store lobbyists, but SPOILER ALERT: it doesn’t end in alcoholic apocalypse.