By George Chuvalo with Murray Greig 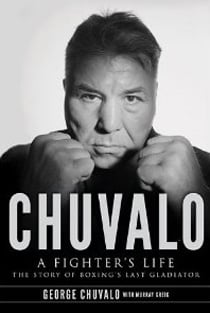 Chuvalo: A Fighter’s Life, The Story Of Boxing’s Last Gladiator

By George Chuvalo with Murray Greig

George Chuvalo’s claim to fame has always been his ability to take a punch. In 93 career professional bouts, the former Canadian heavyweight champion was never knocked down. But as the 76-year-old writes in his autobiography, life outside the ring laid him flat more than once. Three of Chuvalo’s sons descended into heroin addiction, and died—two from overdoses, one from suicide—over a 10-year period in the 1980s and 1990s. And four days after the funeral of the third, Chuvalo’s first wife, Lynne, took a fatal dose of barbiturates. “I looked for love and couldn’t find any,” read the suicide note she scrawled on the back of a grocery list.

It’s the agony that has defined the former boxer’s life for the past two decades, as he travels around North America giving anti-drug presentations to schools and youth groups. And he doesn’t shy away from sharing the ugly details—as well as some lapses of his own over the years that paint him in a less than flattering light.

That being said, A Fighter’s Life is mostly that: an exhaustive chronicle of his boxing career. Chuvalo fought often over his 21 years as a pro—two or three times a month at his height. Mostly against long-forgotten heavyweights. But the details of his bouts against the likes of Floyd Patterson, George Foreman, and Joe Frazier remain compelling. And the two times he went the distance with Muhammad Ali are part of the sport’s rich history. After their first 15-round tussle in Toronto in 1965, Chuvalo and his wife went out dancing, while the winning Ali spent the night in hospital, peeing blood.

Like so many boxers, Chuvalo’s story is a hard-luck one. In his telling, he frequently got robbed by the refs and the promoters. And his biggest payday—$65,000 for the second Ali fight—was chickenfeed compared to today’s multi-million-dollar purses. The sections dedicated to his hardscrabble childhood in Toronto’s Junction neighbourhood, and his nightmare life after he stepped away from the ring, are the most compelling reading. Proof that Chuvalo’s outsized capacity to absorb punishment came early, and continues to this day.