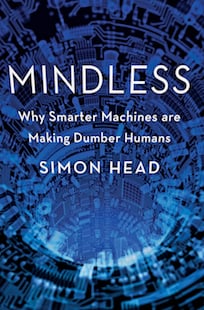 In this intricate exposition of Computer Business Systems—the computerized management programs that large organizations use to control their employees and their output—Head, an academic at Oxford and New York universities, tells a story as depressing as any that even a time-and-motion specialist could imagine. It’s bleak enough to see the grinding, Dickensian effect CBSs have on shop-floor workers at Wal-Mart and Amazon. At the latter, management uses its CBS to break down basic warehouse work of shelving, packaging and dispatching to customers into units measured in seconds. Referring to Amazon’s employee monitoring as “the most oppressive I’ve ever come across,” Head describes how British employees were issued personal satellite-navigation computers that told them which routes in their warehouse were fastest, set target times for those journeys and measured whether the targets were met. Employees who fell behind time received warning texts, before eventually being fired.

Bad as that is, those employees are interacting only with inanimate objects. As CBSs intrude further into white-collar work—in financial services, health care, universities and public administration, for instance—it’s not just the workers feeling the strain, but borrowers, patients, students and taxpayers in general. In organizations as varied as FedEx, Dell and the U.S. military, computerized systems now oversee volatile human interactions. In Britain, the Research Assessment Exercise (RAE), which requires academics to turn out a set number of books or articles over a four- or five-year period, generated so many scholarly submissions in 2001 that they had to be temporarily stored in an unused aircraft hangar. And at Goldman Sachs, Head argues, such systems were a key element in manipulating subprime mortgages long past the point when human judgment would have reckoned the risk too severe, making them a major component of the 2008 economic meltdown.

The effects, from an unhappy public to the deskilled and hence devalued workers, are obvious to Head. The solution, not so much, although Head takes solace from the example of Henry Ford himself. One of the fathers of ruthlessly efficient factory output also realized the need to pay his workers well if they were going to be able to purchase his products. With its failure to reward most Americans, Head writes, the current U.S. economy is unsustainable. Or so he hopes.