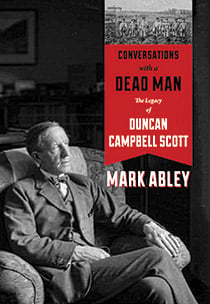 Conversations With A Dead Man: The Legacy Of Duncan Campbell Scott

Abley has produced something seemingly inconceivable: an intelligent, absorbing and, yes, entertaining book about an infamous Canadian villain who oversaw residential schools at the height of their brutality toward Aboriginal peoples. Abley is a poet, which makes him the perfect biographer of another poet, Duncan Campbell Scott, who happened to have had a day job for over 50 years in the Department of Indian Affairs.

Scott is commonly and wrongly attributed with uttering the goal to “kill the Indian in the child” (a phrase that belongs to an American military officer), but rightly associated with the expansion of the Indian residential school system in the 1920s and 1930s. Abley analyzes Scott’s poetry and policies, struggling with the paradox of his life: how could a poet write so empathetically about Aboriginal people and consign their children to merciless assimilation, abuse and death?

Abley tries to answer this by summoning the poet-bureaucrat’s ghost to speak for himself. The ghostly Scott has feelings, wit and a great memory for verse. This is a work of non-fiction greased with significant artistic licence. In each chapter Abley covers historical ground and pursues a dialogue with Scott about it. They banter, argue and scold.

At first the reader will find this preposterous. As the pages turn, however, what seemed like a cheap narrative ploy becomes a serious method to understand Scott on his own terms. Scott gets a real chance to explain how someone well-meaning could order the destruction of Aboriginal families and culture. For Scott, the schools were about extending Canadian citizenship, not colonialism.

Novelist L.P. Hartley once wrote, “The past is a foreign country. They do things differently there.” A tempting view, but Abley resists the urge to discard Scott as a racist imbecile. The villain was a man, and his nation is our nation. Abley’s act of radical empathy makes it harder to turn the page on a chapter of our history we might otherwise slam shut.