Diamonds are the Queen’s best friend

When Royal Collection curators planned this summer’s exhibit at Buckingham Palace, the theme wasn’t difficult to nail down. “Well, in this Diamond Jubilee year, it seemed entirely fitting to focus on diamonds,” says curator Caroline de Guitaut. “They have a sense of longevity that is mirrored by the length of the Queen’s reign.”

The once-in-a-lifetime display contains 10,000 diamonds encrusted on tiaras, brooches, boxes and swords. Some are simple, well, at least by regal standards—the flawless two-stone, 158-carat brooch last worn by Elizabeth II in June at St. Paul’s Cathedral, for example—while others are dazzling confections, such as Victoria’s tiny crown, which has nearly 1,200 diamonds.

Most of the jewellery in the exhibit belongs to the Queen, rather than the Crown. Her personal collection, some of which dates back to the Georgian era, is so massive—buoyed by centuries of empire, conquest and wealth—that things she’s worn for decades didn’t make the cut.

As well, Hugh Roberts, the Royal Collection’s former director, has penned the first authorized account of Her Majesty’s personal jewellery. The Queen’s Diamonds is an exhaustive, fascinating history of Elizabeth II’s most important sparklers. It’s a treasure trove of delicious details that royal jewellery blogs have been overdosing on, as they replace old rumours and conjectures with confirmed information. The Queen really did break apart a Cartier tiara given to her by an Indian prince to create a diamond-and-ruby headpiece that, sadly, epitomizes the banal cluttered designs of the 1970s. He also reveals new nuggets: one historic tiara, last seen in 1939 at a Montreal banquet, is not only still in one piece, but has been loaned to the Queen’s daughter-in-law, Camilla, who has yet to wear it.

Much of the Queen’s personal jewellery was shaped by her grandmother Mary. Born to parents with little money and low royal standing, she coveted diamonds, in part for the status they bestowed. She wasn’t alone. Monarchs have long “subscribed to the view that diamonds should be accumulated as a necessary part of the outward show of monarchy,” Roberts writes, “and as a visible representation of the wealth and influence of the country and its rulers.” It hasn’t always been easy. When George IV created the state diadem in 1820 for his coronation, he was so short of funds that he rented the diamonds.

Mary was luckier. As queen, she could afford to buy what she liked. In 1921 she purchased an interlocking circle tiara hung with pearls that had belonged to Grand Duchess Maria Pavlovna, the czar’s aunt, and was smuggled out during the Russian Revolution. While the precious stones that flowed into royal jewellery boxes slowed as the Empire waned, they didn’t stop. In 1942, the Queen’s mother was bequeathed a collection of more than 60 pieces by a childless heiress, Mrs. Ronald Greville, “with my loving thoughts.” Among the gems given to Elizabeth II is a flawless 23.6-carat pink diamond from Canadian mining magnate John Williamson and at least two diamond necklaces from the nouveau royal riche—the Saudis.

Though most pieces are priceless, royal women constantly have jewellery redesigned as fashions and tastes changed. “Not every jewel suits everyone,” de Guitaut notes. “They are completely at liberty to do as they wish.”

Some have been altered repeatedly. The most famous tiara, a spiky, delicate, wedding gift to Mary in 1893, was often remounted on a small coronet frame. Then Mary replaced the large pearls with diamonds from another dismantled headpiece. Around 1914 she divided it into two, using the base as a bandeau, in vogue at the time. The present Queen reunited the halves in 1969.

While tourists admire the glittering display at Buckingham Palace, a new generation of Windsors is enjoying the jewellery. The Cartier halo tiara showed up on Kate Middleton last year after a four-decade hiatus. As for emeralds, rubies and the like, no one, except the Queen and her dresser, knows what else is tucked into the back of her jewellery vaults. 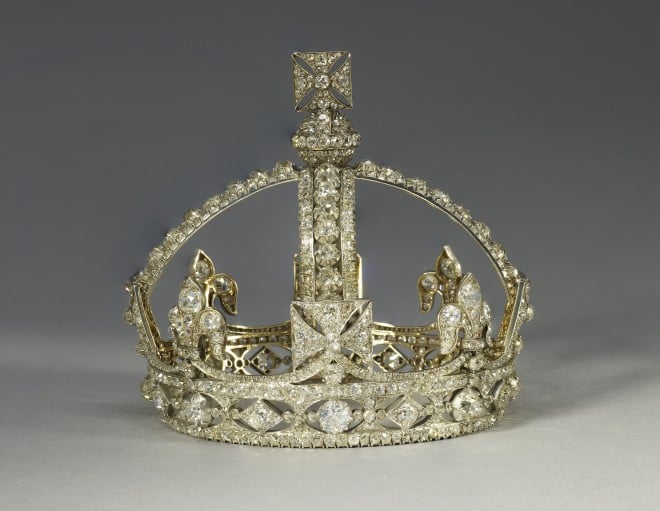 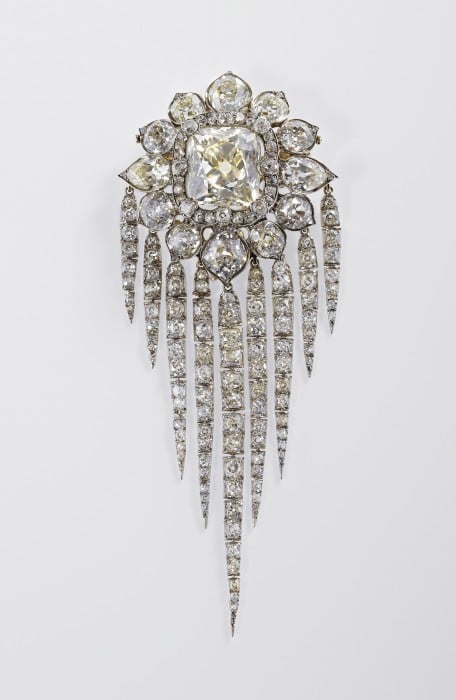 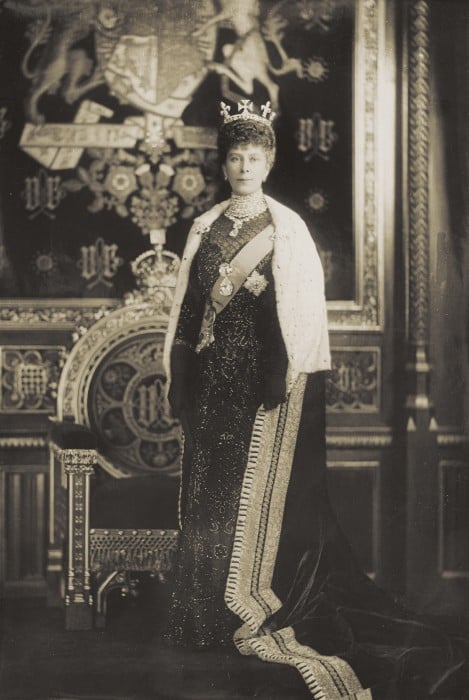 Queen Mary wearing at least nine diamond necklaces and a brooch made with the world's two largest, flawless diamonds 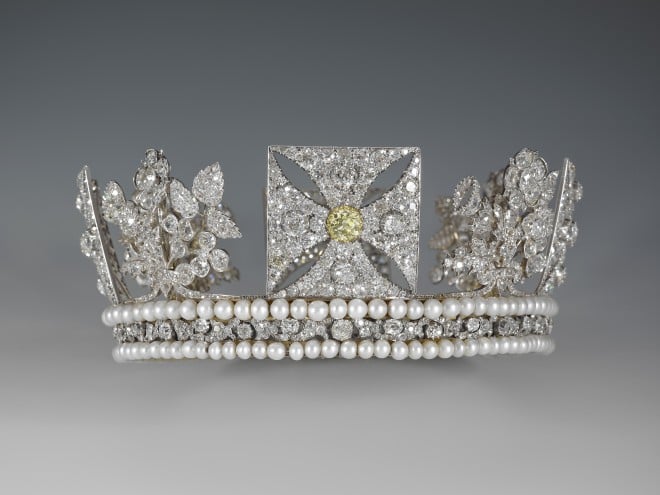 George IV's state diadem, now used only by women. The Queen wears it to the annual state opening of Parliament 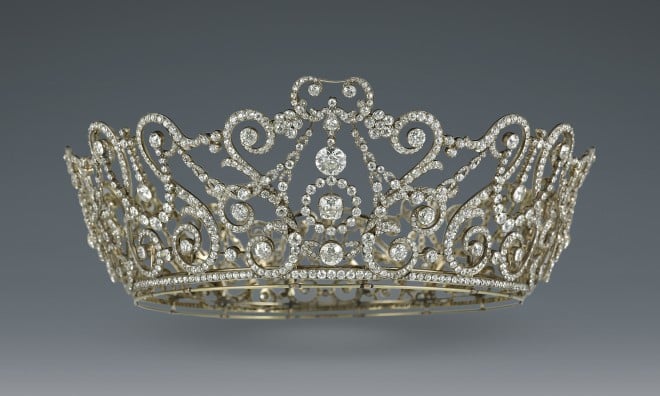 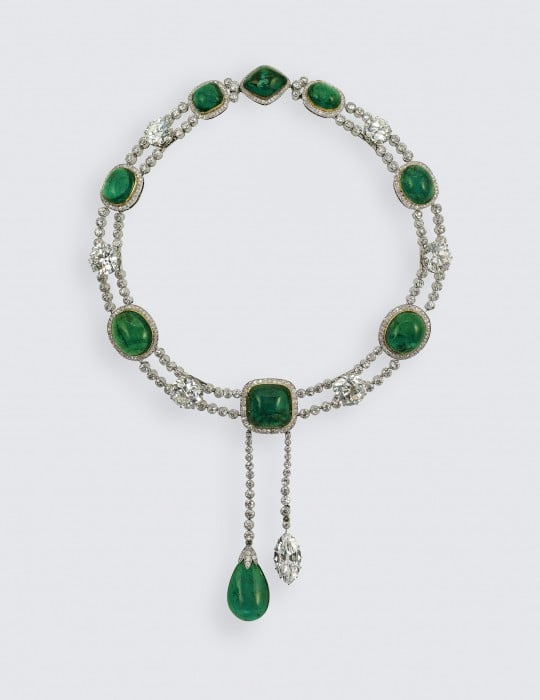 Delhi durbar necklace: the emeralds were won by the Queen's great-great grandmother in a 1818 state lottery in Germany 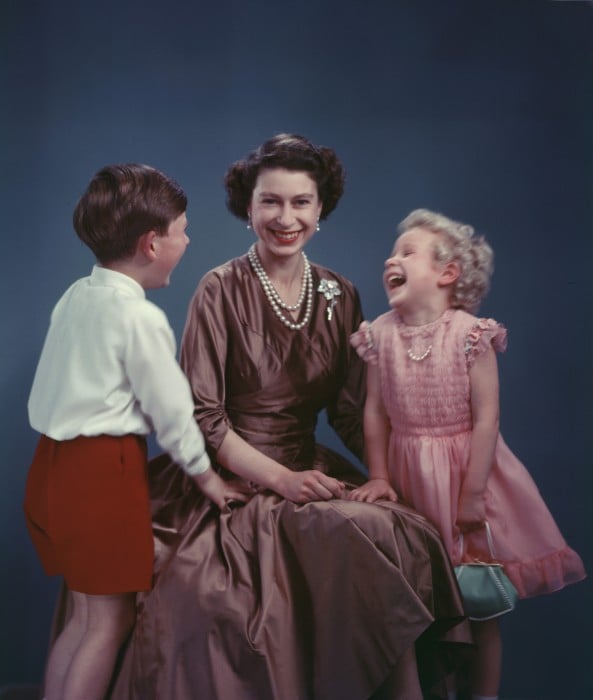 Queen Elizabeth wearing the Williamson brooch in 1954, with Prince Charles and Princess Anne 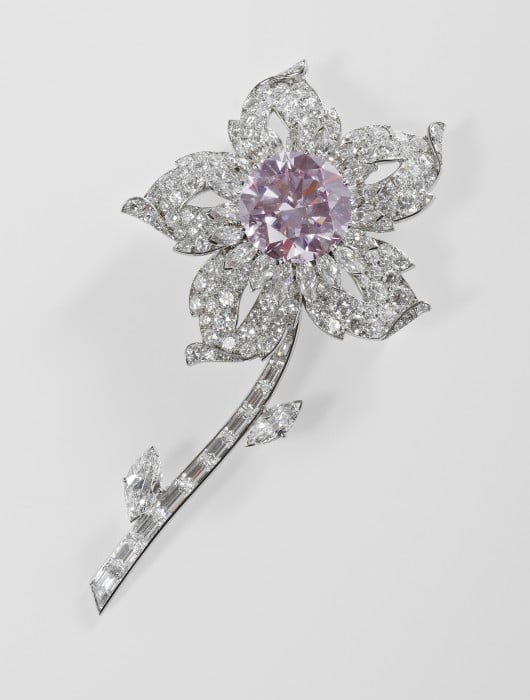 Williamson brooch: the centre 23.6-carat stone is the finest pink diamond in the world 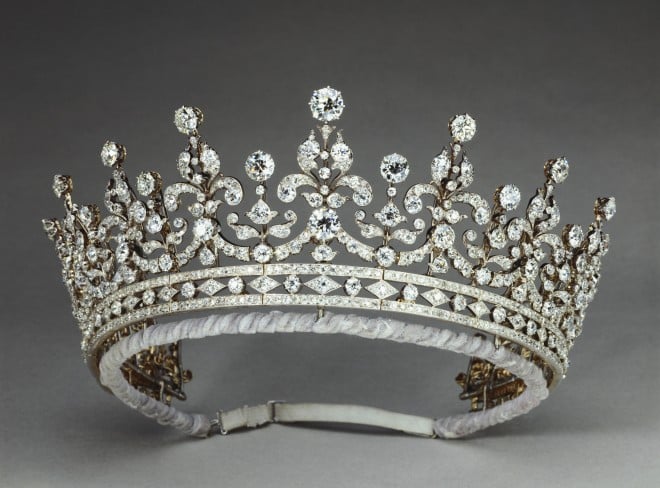 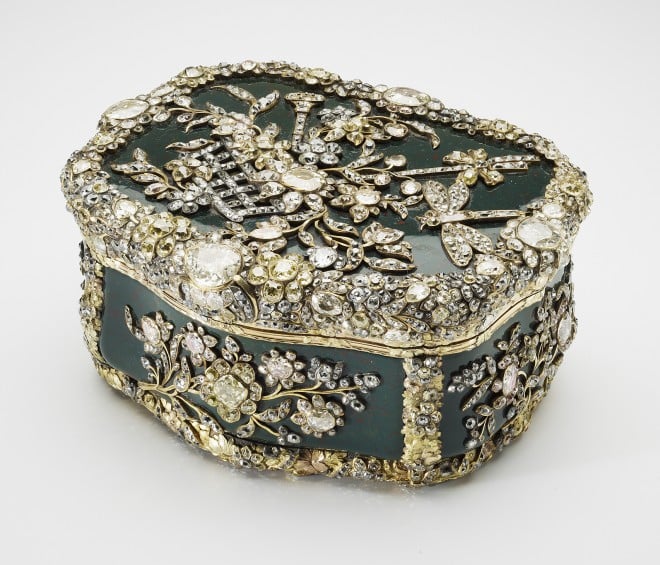 Table snuff box of Frederick the Great of Prussia