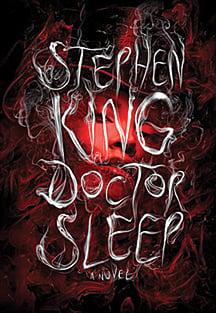 In 2009, on stage in a conversation with David Cronenberg in Toronto, Stephen King revealed he had been contemplating writing a sequel to The Shining. The 1977 novel, about an alcoholic writer who takes a winter caretaker job with his wife and psychically gifted son at a remote resort inhabited by violent ghosts, is one of King’s signature works of horror. It has become part of popular culture—made famous by Stanley Kubrick’s film and repeatedly spoofed since, from The Simpsons to amateur YouTube trailers. But despite its most conclusive ending, in which both possessed dad Jack Torrance and the haunted Overlook Hotel are destroyed in a spectacular explosion, King admitted one questioned has lingered: Whatever happened to the kid?

Doctor Sleep finds Danny Torrance, now in his 40s, blunting his childhood demons with booze as he skips from one blackout and no-name town to another. In one New Hampshire community he finds AA, an honest job at a hospice—where he uses his “shining” to help terminal patients cross over to death, earning him the book’s titular nickname—and an eerie psychic connection with a young girl named Abra. It’s the girl, whose shining abilities far eclipse Danny’s (she predicted 9/11 as an infant), that gives this sequel its own soul. Abra has been targeted by a powerful cult calling itself the True Knot, whose members travel America’s highways in RVs, kidnapping such gifted children, who, in their death throes, provide vital nourishment for the vampire-like monsters.

King excels at setting supernatural struggles in small-town America, and in Doctor Sleep he writes as much meaning into a teen boy’s baseball glove and the coffee rituals after AA meetings as the epic battles between good and evil. Direct links to The Shining can be found, but with the introduction of Abra and the True Knot, King delivers more questions than answers. More than a sequel, this feels like a prequel to a whole new series.