Review: Don't Tell the Newfoundlanders: The True Story of Newfoundland's Confederation with Canada 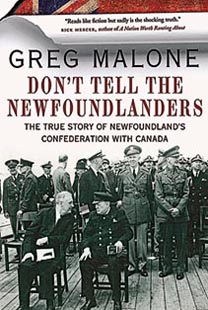 When the Second World War ended, the future of Newfoundland was not only an issue for its people, it was also a matter of considerable significance for the victorious English-speaking nations at the heart of what would be called the North Atlantic Treaty Organization. Newfoundland, in the British phrase, had had a very good war, taking a front-row place in the crucial Battle of the Atlantic, hosting large numbers of Allied (particularly American) servicemen and economically emerging out of the Great Depression that had seen it lose its self-rule in 1933 and become again a colony governed directly from London.

Now, a broke Britain wanted out of what it saw as a burden. Canada wanted—in its lukewarm, Mackenzie King way—to complete its 80-year-old Atlantic-to-Pacific dream and, more determinedly, to prevent outright American control of Newfoundland. And the U.S. was amenable, as long as American air bases there—as important in the nascent Cold War as they were against the Nazis—were untroubled. As far as the larger nations were concerned, then, a deal practically made itself. Trouble is, as Malone—an actor and political activist best known for the Codco TV series—points out, not only did no one really ask the Newfoundlanders what they wanted, no one wanted to take the democratic gamble of giving them a fair chance to decide.

What the great majority of Newfoundlanders wanted was not to decide the future of a colony, but something contemporary Canadians have trouble grasping: they wanted their country back, a nation that held Dominion status equal to Canada’s from 1907 to 1933. And once they had regained that, it was by no means certain they would then choose to enter Confederation, opt for economic or even political union with America, or remain in complete independence. Malone relentlessly chronicles a three-year British-Canadian campaign of what he calls “connivance, duplicity, mendacity and abuse” that even then resulted in a winning referendum choice for Confederation of only 52 per cent.

Malone, who writes how, in the early 1970s, he “went to Toronto a Canadian and came back a Newfoundlander” after his frequent encounters with anti-Newfoundland “ignorance and prejudice,” sounds, ironically enough, very Canadian in his outsider resentment of whatever passes for the exploitative inner circle of this country. But if he has a chip the size of a rock on his shoulder, Malone can scarcely be blamed for it. Consider only this: could an independent Newfoundland possibly have mismanaged its fisheries any worse than Ottawa did?