The Paris Commune burned the city in 1871, after the massacre of 17,000 people by government troops for wearing workers’ clothes 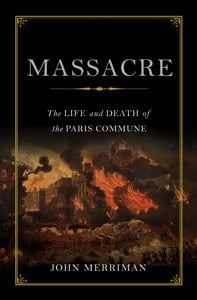 MASSACRE: THE LIFE AND DEATH OF THE PARIS COMMUNE

The 1871 Paris Commune was formed in the wake of France’s calamitous defeat by Prussia the year before. Its brief, 64-day life has never received a lot of attention in mainstream histories, and that little hasn’t been favourable. The Commune may not have started out all that radicalized, but as the newborn Third Republic tightened the siege of its alienated capital, the desperate Communards did begin shooting hostages (including the archbishop of Paris), and set fire to the Tuileries palace, city hall and the law courts, acts not calculated to inspire gentle historical treatment.

But Yale historian Merriman is determined that the usually glossed-over savagery of state repression not be forgotten. During the Commune’s last days—known in Parisian memory as la semaine sanglante, or “bloody week”—government troops entered the city and gunned down perhaps 17,000 people, many for no greater crime than wearing workers’ clothing or speaking in working-class accents: in other words, for who they were, rather than for what they had done. It was an eerie foreshadowing of the continent’s near future. “The biggest massacre in 19th-century Europe,” Merriman writes, “anticipated the demons of the century to follow.”

The author handles a dramatic story with verve and moral outrage, weaving together a blow-by-blow account of the Commune’s demise with its larger backstory. Napoleon III’s tottering French empire fell with his armies, and the war-weary conservative rural areas of France elected a government ready to sue for peace at any price. The Parisian poor—about a quarter of them indigent, Merriman calculates, with thousands made homeless by Baron Haussmann’s City Beautiful projects—begged to differ. And when the national government botched its attempt to take control of the artillery in the city, a red flag was raised over city hall.

Merriman’s main purpose is not to describe the Commune’s inchoate socialism—its attempts to regulate working conditions and hours, and demands for higher pay—but the process by which the government demonized its own people enough to justify their slaughter. Troops were given newspapers that didn’t just call Communards rebels or even traitors, but degenerates; words like “purify” and “vermin,” later staples of Nazi rhetoric, were thrown around; officers humiliated by German military success were primed to machine-gun what they saw as a cancer on the body politic. It was so easy then, and again in the 1930s and ’40s, Merriman implicitly asks: could it still be easy now?