Past the lopsided Montreal street, the vacant lots and the wrecking yard, there’s the thrilling smell of manure–and Belle. 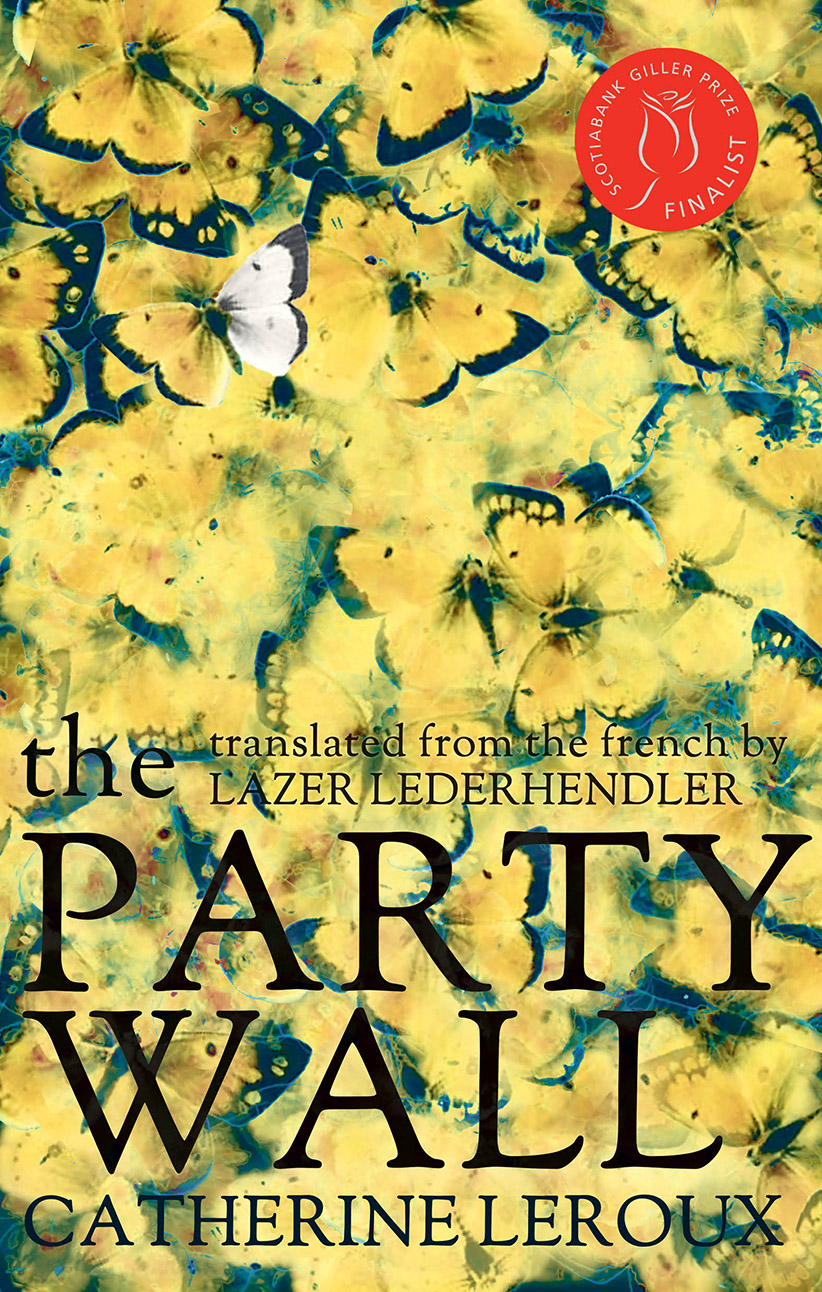 Catherine Leroux has been nominated for the 2016 Scotiabank Giller Prize for The Party Wall—a novel collecting four narratives about siblings. An exclusive excerpt from the book follows. You can also read, as part of our ongoing series profiling all the shortlisted authors’ creative process, Leroux’s essay on her craft here.

The twisting wind wraps itself around Angie’s ankles, a ground-level wave that takes her by surprise. The wind, as a rule, does not linger at people’s feet. Except the strong, low wind produced by a passing train. As if to trip you up. She looks down to examine her shins, her knock-knees. The children she knows are simply thin, or else they are chubby, plump, fleshy. Angie is nine years old and as gnarled as a crone. She resembles the pine trees growing on mountaintops. The shape of her fingers and toes is complicated, and her elbows protrude from the middle of her spindly arms, two black pearls mounted on taut wires. She dreads the day her breasts will appear, convinced as she is that they will emerge, not like the pretty apples flaunted by the girls in junior high, but like two angular bumps, two angry fists pounding their way through her chest.

Inside, Monette is still negotiating with her sandals. Though perfectly capable of putting them on, she takes an inordinate amount of time to fasten the straps because even the slightest misalignment of the Velcro strips is intolerable to her. She attaches them, detaches them, repositions the hook side over the loop side with the concentration of a Tibetan monk, inspects her work, finds it wanting, and starts over. Under the silky rays of the sun, Angie does not lose patience. While waiting for her little sister, she contemplates the languid swaying of the willow, their tree, the biggest one on the street.

Mam told them, “It’s nice out. Go for a walk!” She will use the time to swab down the house, a house so old and memory-laden that cleaning it is well-nigh impossible. Still, come May, Mam scrubs everything, including the wooden floors made porous by the floodwaters and the windows turned chalky from being permanently fogged-up.

Monette finally comes out into the bright daylight, blinks and wipes a tear from the corner of her eye. Though dazzled, she manages to find her sister’s hand. As usual, she twitches at the touch of the callused palm, which reminds her of the rough side of Velcro, but the next instant her own skin nestles in it as if it were the comforting cloth of an old woollen blanket. Together, they walk down the four cracked concrete steps. The crack in the second-to-last stair looks like a dragon. She avoids treading on it. The pavement leading to the sidewalk is also broken and has weeds sprouting in the gaps. Mam does not pull them out and has taught her daughters to respect these humble shoots. “There’s no such thing as weeds. That’s just a name for some flowers thought up by racist gardeners.” Monette ruffles their petals with a caress.

As always, the moment they reach the street they instantly leave behind the world of home. Yet no fence separates the front yard from the avenue. There is, however, an invisible barrier that makes it possible to be completely oblivious of what transpires on the other side and that hides the house from strangers, Angie hopes. Two boys go by dribbling a basketball. They wear loose-fitting t-shirts and their skin is coated with a fine mist. Their voices are loud and they spout obscenities. Angie covers her younger sister’s ears. Monette has heard far worse, but Angie believes in the gesture of covering her ears, in the intention behind it. Once they’ve let the teenagers pass, Angie motions with her chin in the direction they’re to walk: south. Before starting out, Monette looks down, examines her sandals, hesitating momentarily. Then she sets off, her pudgy little hand welded to her sister’s.

The street is divided in such a lopsided way that it seems about to keel over, like a boat in which the passengers have all gathered on the same side. The houses on the eastern side are narrow and dilapidated, and the paint on most of them is peeling off in delicate white plumes; across the street, they are massive, stately, adorned with a complex arrangement of balconies and bay windows. Mam claims the railroad is the reason the east side of the block has such modest dwellings. No one well-off wants to move there, right beside the tracks. But surely, Angie says to herself, the residents across the way must also hear the whistle and the inhuman squealing of the train.

As usual, Monette pulls Angie by the hand to cross the road and walk past the luxurious homes, but her sister rarely gives in. The small houses remind Angie of her own; she seems to know them by name, and their windows, though cracked, watch the girls benevolently as they go by. By staying on this side, Angie feels she is restoring balance and keeping the neighbourhood from capsizing.

At the fifth intersection, the row of posh-looking residences tumbles over a wide cross street and gets dispersed in a middle-class district. The area, according to Mam, was developed years ago in the hope of attracting prosperous Black families. Today it’s almost deserted. Monette and Angie continue along a sparsely populated stretch of road riddled with vacant lots where the grasses reach dizzying heights and hide the crouching cats and opossums gnawing at their meagre prey.

They walk past a wrecking yard; recognizing the place, Monette starts to hop up and down and sets the heavy braids Angie had plaited that very morning dancing around her head. They come to a shack painted pink that exudes a warm odour of manure. Monette’s hand grows damp with excitement; she gives her sister a pleading look that is answered with an approving nod, at which she loosens her grip. Monette dashes ahead.

The enclosure looks empty, and Angie is afraid the child will throw a fit, but for now she shows no signs of discouragement. Monette resolutely tears little fistfuls of grass and dandelions out of the ditch and comes back to jiggle them between the slats in the fence while emitting sharp, amazingly precise sounds through her clumsy lips. A shape stirs in the shadows, and Angie’s heart inconspicuously leaps into her mouth. The swayback pony obediently steps forward. As always, Angie is overcome by a strange sensation at the sight of this horse, perpetually small, yet so old, so weary.

The animal chews tamely on the proffered snack, then Angie lifts up Monette so she can stroke—ever so lightly—its peeled muzzle, its scrawny croup, its ragged coat. From the back of the pink shed, a man wearing a flawless moustache appears and, beaming with pride, greets them. Old Craig is fond of his filly.

“She’s not a horse, she’s a pony. Her name is Belle,” Craig replies patiently.

Monette solemnly nods her head and stores the information in a place where it can slumber until something can make better sense of it. The old man enters the paddock and, pulling on the halter, leads the animal back toward the shed.

“She has to rest now. She’s working this afternoon,” Craig says, pointing to the junk wagon that he has been driving through the streets of Savannah for decades.

The little girl reluctantly lets the animal move away and returns to the sidewalk, where she once again takes her older sister’s callused hand. Angie and Belle resemble each other, but Monette does not understand why. Overhead, a military jet cuts through the sky and the droning of the cicadas. Having taken off from the nearby base, it streaks toward an unintelligible country where death is not content merely to lurk in the tall grass of vacant lots.

Excerpted from The Party Wall. Copyright © Catherine Leroux, 2013. Translation copyright © Lazer Lederhendler, 2016. Excerpted by permission of Biblioasis international translation series. All rights reserved. No part of this excerpt may be reproduced or reprinted without permission in writing from the publisher.