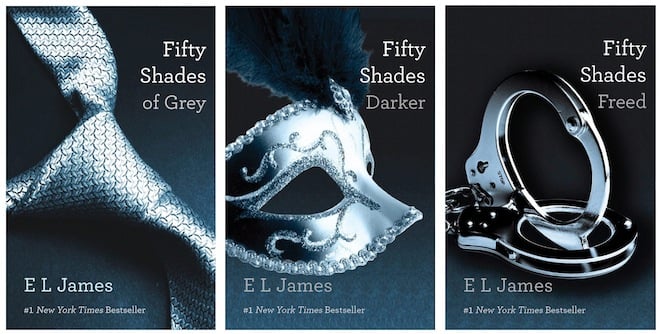 News that E.L. James, the author of the Fifty Shades of Grey trilogy, has just signed a big-bucks deal with a global licensing agent to market related merchandise—fragrance, bedding, stationery, and such—shouldn’t surprise anyone who was enough of a masochist to finish the over-hyped literary blockbusters.

The book’s huge female following didn’t go unnoticed by merchandisers. One enterprising online fetish-gear retailer was quick to offer “8 Essentials to Fulfill Your ’50 Shades’ Fantasies”— echoing cover lines on women’s magazines with their “5 new ways to please your man.” Women were told to “Live the Fantasy” and stock their own “playroom” with a “pretty pink ball gag,” handcuffs with shower-friendly suction cups and entry-level flogging devices.

Predictably, hotels offered book-themed get-away, tie-me-up packages. The first was a female-owned San Francisco hotel with a “Fifty Shades of Women” deal featuring an “intimacy kit” with a black satin scarf, lube and “limited edition” designer condoms. The Heathman Hotel in Portland, Oregon, an upscale setting in the book, also cashed in on the association with its US$2,700 “Charlie Tango” package, named after Christian’s helicopter.

And even staid Brooks Brothers capitalized on the frenzy by marketing “Eight Shades of Grey Ties,” an allusion to the silver grey tie featured in the book, and on its cover.

The strongest indicator of the “Fifty Shades of Grey consumer effect,” however, has to be hardware stores reporting an upswing in women buying rope, presumably to tether objects in the boudoir, not the basement.

So one can’t blame James for signing a deal, which will give her a piece of the frenzy she created. But the merchandising deal also signals the fact her book is as much grounded in the narcotic world of consumption–shopping, eating, drinking–as it is about non-vanilla sex.

That fact was glaring obvious when I hate-read the first book, more intrigued by what has made it such a phenomenon than its clunky prose. Of course, name-checking luxury goods in novels is now so common, it’s not even noteworthy; it’s character shorthand, a social signifier. So it is in Fifty Shades of Grey: impoverished literature student Ana (who works part-time in a hardware store) drives a beat up VW Beetle and drinks Twinings English Breakfast tea; rich mogul Christian drives a fleet of Audis (if author James isn’t being paid residuals from Audi for her frequent, fawning mention of its products, she needs a new agent). Throughout, there are also countless shout-outs to Converse, Apple, BlackBerry, Bollinger La Grande Année Rosé 1999, and Ray-Ban.

It’s a trend Brett Easton Ellis pioneered in his 1991 Yuppie killer novel American Psycho (which could explain why Easton Ellis recently expressed interest in writing the screenplay for Fifty Shades of Grey.) In 2001, British author Fay Wheldon shocked when she signed a deal with jewelry house Bulgari to mention its products 14 times in a novel.

Now James’s Fifty Shades of Grey, written originally as Twilight fan fiction, offers the perfect erotic-consumption symbiosis. And, even better, served up an audience that has already shown it’s willing to buy anything.