Book Review: An Epic Story of Survival and a Modern Quest for Lost Heroes of World War II 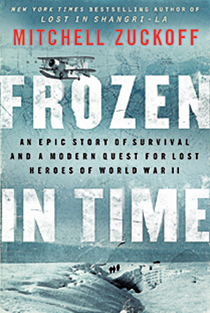 Frozen In Time: An Epic Story Of Survival And A Modern Quest For Lost Heroes Of World War II

If you thought Steven Spielberg’s Saving Private Ryan represented an inspiring middle finger to utilitarianism—why did so many soldiers die to save just one?—the tales Mitchell Zuckoff has unearthed about World War II rescue missions in icy Greenland prove that truth is as honourable as Hollywood fiction. It went like this: On Nov. 5, 1942, an American C-53 cargo plane went down with five souls aboard; four days later, a B-17 bomber on a rescue mission crashed, stranding nine more in the Arctic freeze; 20 days later, three more men went down in a third plane sent out to rescue the soldiers in the second. This cascade of ill luck befalling good men sets the scene for a remarkable story of survival.

The author hopes to rescue heroes from the “cracks of history.” No doubt he has succeeded, though at times one wishes he didn’t have to seize every occasion to trumpet how the soldiers’ “bravery, endurance and sacrifices reveal the power of humanity in inhumane conditions.” In any event, the deeds are impressive enough to awe, if not inspire. The pilot of the third plane, in trying to rescue the second, faced a decision about landing on an uneven glacier laced with crevasses. He dropped a note to the stranded men asking for their assessment of the situation. It read: “If there’s a 60-40 chance, I’ll take it.” The starving, frostbitten crash survivors told him not to risk it. The pilot tried anyway. Such is the unselfishness of wartime.

Zuckoff weaves in a parallel story about contemporary efforts to recover lost but unforgotten planes and bodies. It is not nearly as compelling. For some reason the author lavishes pages on trip preparation, when a reader rightly expects a steady diet of adventure. Editorial cleavers should have resolved this. Still, Second World War history buffs will find much to appreciate in this account of “the national commitment to leave no man behind.”