Book review: Give Me Everything You Have: On Being Stalked 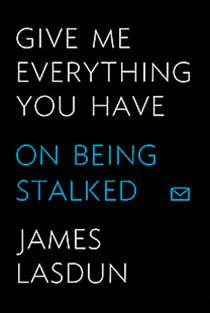 When writer James Lasdun spurned the advances of a former student, the student decided to “ruin” him with a campaign of “verbal terrorism.” She posted defaming online reviews of his books; sent emails to his agent, publisher and employers, accusing him of sexual harassment; and spoofed his own email address, pretending to be him online. If Lasdun’s memoir were a Hollywood story, we’d expect him to track her down dramatically and resolve the conflict, but in real life, cyberstalking is harder to snuff out, its effects insidious. To try and regain control of his image—even his life—Lasdun wrote this book.

Give Me Everything You Have opens as a taut thriller detailing his history with the woman he calls “Nasreen.” When teaching a college writing course in New York in 2003, Lasdun, a London-born writer of poetry and fiction, praised her work. He and Nasreen, an immigrant from Iran, corresponded thereafter, and he introduced her to his agent. Four years later, when he retreated from the prospect of a romantic relationship, she lashed out, beginning with vituperative emails that entwined personal and anti-Semitic insults.

As the book progresses, Lasdun widens his scope. He turns to literature to try and make sense of what’s happened, through stories of temptation (Sir Gawain and the Green Knight) and foreignness (the Tintin books that he reads to his son). He describes a trip to Jerusalem, where his architect father had hoped to build a synagogue, and offers insight into the nature of racial hatred and misunderstanding, and the thorny ways that people and groups construct identities alongside, and against, one another.

He admits to becoming obsessed with Nasreen’s obsession with him, and although his search for an explanation sometimes derails his narrative, Lasdun’s vivid observations are disconcertingly insightful. Our wired, crowd-sourced world, he notes, intensifies the ways our self-image can be shaped by other people’s portrayal of us. Fortunately for Lasdun, his book has received enough press to foreground his own version of his life. Against the unending din of those who vent online, the power of thoughtful prose remains.