Go Set A Watchman: A silent, steady launch for a major book

Harper Lee's much-anticipated 'To Kill A Mockingbird' follow-up is selling like hot cakes. But where's all the launch-day excitement? 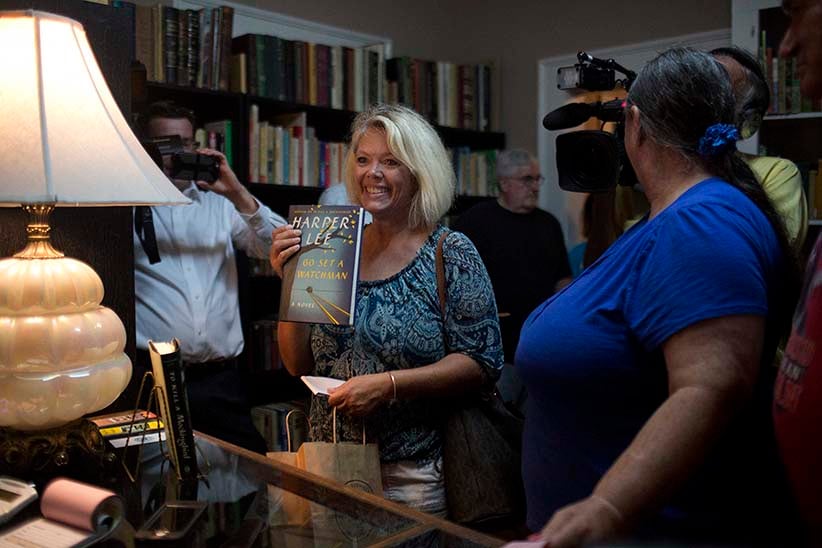 Book fan Julia Stroud was the first in line to get a copy of “Go Set A Watchman,” during the midnight book release in the hometown of “To Kill a Mockingbird” author Harper Lee, Tuesday, July 14, 2015, in Monroeville, Ala. Midnight book releases in Canada were few and far between. (Brynn Anderson/AP)

To Kill a Mockingbird, Harper Lee’s American-lit classic, is Charlie Kaus’s all-time favourite book. The 38-year-old remembers reading it as a high school sophomore just outside of Chicago, hoping right to the end that the fate of Tom Robinson was not truly sealed. And so, with not too much else to do—he’s currently looking for work—he sat outside the Indigo bookstore at the busy Toronto Eaton Centre at 8:30 a.m., an hour and a half before the store’s opening on Tuesday, to beat the rush for Go Set a Watchman, the follow-up set 20 years later, but published more than five decades after the original.

“People have been waiting 50 years to find out what happens to Atticus, Scout, Boo and Dill,” he said eagerly.

So he got there first. But the line he expected never materialized behind him. “Actually, I am surprised,” said Kaus, looking around 20 minutes before the store opened. By the time the door went up, a few others had gathered in waiting, but they were looking for birthday cards or to return an item, or just to shop.

On the evening before this “historic literary event,” as publisher HarperCollins billed it, Indigo teamed up with Cineplex to present five countrywide screenings of the book’s 1962 film adaptation. The screenings were sold out, but those in the Toronto audience seemed to have come as much for Gregory Peck’s iconic performance—perhaps more so. “I’m here because I want to see this on the big screen, and I haven’t seen it for many years,” said 60-year-old Cheryl Devall, adding that she’s a big fan of Lee’s original. But she didn’t plan on getting to a bookstore for the sequel the next day. In fact, none of those interviewed did: “Maybe later, probably not tomorrow,” said Camilla Emmanuel.

This is what a historic literary event looks like in 2015. The anticipation, clearly, is real, and publishers have created a sense of excitement through strict embargoes and record-breaking pre-order numbers. Leo MacDonald, HarperCollins Canada’s senior vice-president of sales and marketing, said the publisher shipped out 200,000 books for the day of the release, the most he’s ever seen. And there was talk of midnight store openings, both in the U.S. and Canada. And yet, Go Set a Watchman prompted no early openings, no rabid lineups, and no promotional launch events attended by diehard fans, at least, not in Canada. Although it had Harry Potter hype, with Canadian media all over it, it didn’t get a Harry Potter launch.

“We’ve sold a good number of copies this morning, and there’s definite interest, no doubt about it,” said Joanne Saul, the owner of the Toronto independent bookstore Type, which was nearly sold out of its stock of 50 by day’s end. “But is it the same kind of phenomenon? No.”

“The demographic doesn’t really dictate it,” agreed Bahram Olfati, Indigo’s senior vice-president of print. “While we believe there is going to be the Harry Potter-type demand, it’s not the kind of book that we can have midnight parties for.”

And sure, a teen-targeted fantasy novel, or even E.L. James’s steamy latest in the 50 Shades series, which debuted to big hype in June, would be launched in a more dramatic way. “I hate to say it, but [Watchman’s audience] is more mature, more sophisticated,” says MacDonald, who added that the publisher had hoped for special events to sprout up organically, but “there just didn’t seem to be the interest.” There’s also the fact of the book’s Southern sensibilities; Canada lacks those roots.

But more than this, it’s a reflection of a changing industry, where sales are increasingly coming through online purchases or in ebook forms, and where readers can get the book quickly, with less fuss.

Indeed, says Steven Beattie, the review editor at Canadian publishing magazine Quill & Quire, one need look no further than the fact that pre-orders have become the de rigueur metric of success for publishers, driving sales to digital platforms. “This feels like another move in the direction of the Hollywood blockbuster mentality, where a film has to open big on its debut weekend if it is to be deemed a success,” he says. “Now, much of the emphasis seems to be on getting people to pre-order the book as a means of bumping up its sales position on Amazon prior to publication.”

Certainly, Go Set a Watchman is no Potter, but its wide cultural appeal—it’s a beloved classic read by high school students over the last five decades—setting itself up to be a kind of Harry Potter for adults. Sales over the course of the day are bearing that out. But, in 2015, at least in Canada, this is the sound of a giant hit landing: mouses clicking, and one man waiting in line. In fact, early on July 14, Kaus—that diehard who lined up at the Indigo store to buy his copy—was already reading Go Set a Watchman on his Nook e-reader, even as he waited.