The 75-year-old teen gets a serious makeover. But is it wise to mess with a beloved comic book icon? 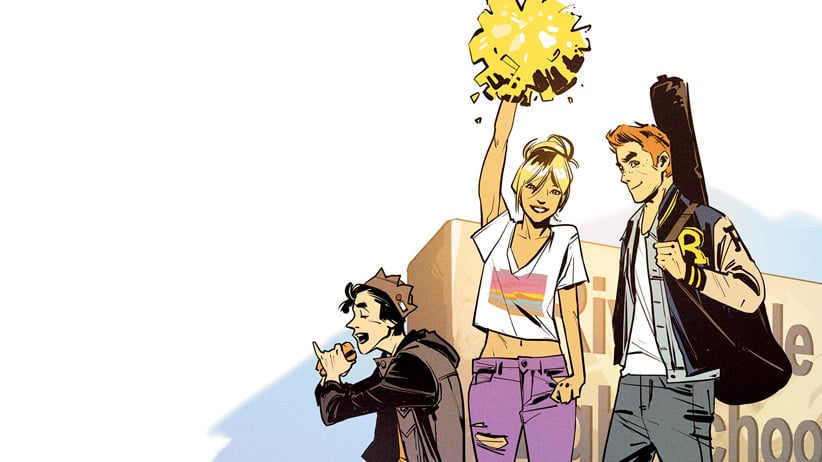 Archie is cool now. Yes, the 74-year-old teen-humour comic book, which never seemed to change, has changed so much lately that you literally might not recognize it sometimes. Earlier this month, the publisher announced that the main Archie title, which had gotten up to more than 600 issues, will be relaunched with a new No. 1 issue and a creative team to catch the eye of grown-ups who might never buy an Archie comic for themselves.

Instead of the teen-humour specialists who usually write and draw the books, the new series will be written by Mark Waid, the award-winning writer of superheroes such as Captain America and the Flash. The first three issues will be drawn by Canadian artist Fiona Staples, whose creator-owned comic Saga wins awards every year for its profane space adventures. And the first arc will retell the whole story of how Veronica Lodge moved to Riverdale and embroiled Archie Andrews and Betty Cooper in the longest love triangle of all time.“You’ll see the ‘classic’ Archie style continue to live on in our digests and collected editions,” explains CEO Jon Goldwater, son of Archie founder John Goldwater. But in the mainstream comics, this is not your father’s Archie. Or, for that matter, Jon Goldwater’s father’s Archie.

That’s only the latest step in a multi-year effort to turn Archie Comics from an industry laggard to a leader. “I’ll be frank,” says Goldwater, who took over the privately owned company in 2009. “Archie was a dormant property when I arrived. It was frozen. It was basically a nostalgia brand. And while I think everyone knows about Archie—in the same way people know about Superman, Spider-Man or Batman—that only gets you so far.” Now the comics get into the news for stunts such as Archie’s death in an alternative universe; a serious horror story, the zombie dystopia Afterlife with Archie, is a bestseller as a monthly comic and trade paperback; and the company has made development deals that could get it closer to the holy grail of the modern comics industry: a TV or movie adaptation.

This is all a surprise to anyone who remembers that, until recently, Archie had one of the most rigid styles in comic books. “In case you haven’t looked at an Archie comic book since about 1952, trust me, there hasn’t been much innovation,” Waid wrote in a 2009 article for the blog Kung Fu Monkey, describing his brief experience in Archie’s editorial department. Most stories had to be five or six pages of no more than six panels, with “big, simple lettering and big, simple balloons accompanying big, simple art.” Even the lettering, until recently, followed the once-traditional comics rule of ending every sentence with an exclamation point.

This formula, where the stories stayed the same and only the clothes were different, kept Archie a bestseller until the decline of the newsstand market in the 1970s; after that, the company unveiled a line of digest-sized reprints, sold in supermarkets, which have been its main source of revenue ever since.

Archie stuck to this format because it happened to be what it was best at, says University of Calgary English professor Bart Beaty, author of the new book 12 Cent Archie, the first academic study of Archie’s peak of popularity in the 1960s (Archie outsold Superman in 1969). “The best Archie stories are the ones that are very often rooted in a very small story. Like, Archie’s mother sends him to buy two pies and, of course, everyone gets hit in the face with pies.” Experiments with adventure stories, or making Archie the superhero “Pureheart the Powerful,” were always called off, as he and his pals headed back to the safe territory of the five-page slapstick tale.

Not that this kind of story is easy to do well. In fact, the classic Archie stories have many admirers among comics professionals, who love the strong comedy poses and beautiful girls of artists such as Dan DeCarlo (who created Josie and the Pussycats). Canadian cartoonist Gisèle Lagacé, known for mature webcomics such as Ménage à 3 (as well as for some pencilling for Archie), says she didn’t realize she was influenced by Archie until she was an adult, “when someone pointed out to me how much DeCarlo they saw in my art. Clearly, his style had ingrained itself in me at a young age, and I’m so glad it did!” References to Archie turn up in the strangest places: Ed Brubaker’s noir comic Criminal has a story about an Archie-type character named “Riley Richards,” and Bryan Lee O’Malley’s hit comic Scott Pilgrim vs. the World not only stars a character who seems like a Canadian Archie—complete with a love triangle and his own band—it even has “the Archies” stamped on a drum in one of the musical scenes.

On Twitter, Staples professed herself an admirer of “classic Archie and totally nutso, bizarre Archie.” Kurt Busiek, who has successfully written every type of comic, from The Avengers to Conan to his current fantasy, The Autumnlands, is a big fan of the pre-Pussycats She’s Josie comics by DeCarlo and writer Frank Doyle: “Doyle’s giddy, delightful scripting has no equal,” he says. “It’s light, clever, funny and surprising, and DeCarlo’s art perfectly brings those stories and characters to life. I want complete hardcover reprints of that whole run, and I want them now.” At the top of Goldwater’s wish list of artists are the brothers Jaime and Gilbert Hernandez, whose Love and Rockets is one of the most influential indie comics of all time, and who have both cited Archie artists such as DeCarlo and Harry Lucey as major influences. “I’d love to have Los Bros Hernandez do an Archie story, or whatever they want,” Goldwater says.

Despite all this respect for Archie’s past, by 2009, short comedy stories weren’t getting anyone’s attention. The most publicity Archie got was in 2001, when DeCarlo sued the company over the rights to Josie, and was fired shortly before his death. So the new management set out to do what Marvel or DC do every few months: stories that can get the company in the news.

The biggest newsmaker came when writer-artist Dan Parent introduced an openly gay character, Kevin Keller, who overturned the comic’s reputation for being reactionary and helped to get outlets such as the New York Times interested in Archie. “They’re very good about getting newspaper coverage,” Beaty says. “Whether it’s giving Miss Grundy breast cancer, or introducing Kevin Keller, there’s always interest in what they’re doing.”

But there was one thing missing from events such as Kevin’s solo comic, or the story where Barack Obama and Sarah Palin both came to Riverdale to discuss politics. These stories were mostly in the traditional Archie art and writing style, and it isn’t a style that has much pull with the modern comics fan. So, as heavily publicized as they were, books such as Kevin Keller didn’t sell much in the direct marketplace that dominates the comics industry. That’s because the Archie style is intended to appeal to children and, except for the Archie digests, the modern comic book audience is ancient: “The average age of a customer in a comic book store has gone way up,” Beaty says. “I read a study that said it’s around 35 now, and there aren’t many 35-year-olds who are interested in Archie.”

That means that to compete in the comic stores, Archie has slowly been moving closer to the style of modern comics: more serialized stories, a little more serious content, and art that wouldn’t be out of place in a Marvel or Image comic. “Now they’ve realized they need to court the people who used to read their comics,” Beaty says.

Roberto Aguirre-Sacasa, a writer of Broadway plays, superhero comics and horror films (Carrie), was appointed chief creative officer of the company; on Afterlife with Archie, his scripts are illustrated by Franco Francavilla, known for drawing masked heroes such as Batman and Zorro. Now Waid, known for his traditionalist approach to superheroes, is expected to try to bring a similar kind of prestige to the non-zombie version of the characters. The old Archie stories were written for a young audience that just wanted funny stories. Now it will have to become a book that can actually hook people into buying the next issue.

There are risks to this approach. Beaty thinks that if the revamp of the main title goes too far in the adult direction, it could risk alienating the core of the Archie audience: young children who read the comics, then later pass them on to their own children. “If they aim above the heads of the seven-, eight-, nine-, 10-year-olds right now, then they risk losing a generation. And if they lose a couple of generations, the company won’t be around anymore.” Short stories will continue to be produced for the digests, but the new style of the monthly comics could confuse the once-familiar Archie brand.

Still, Goldwater says the comedy isn’t going anywhere; they’re still looking, he says, for writers who can “write a funny Archie story —which is a challenge unto itself—but also keep the essence of the characters in place.” This means that, no matter how different the style may get, the really important things about the characters will never be jettisoned: In the first sample of Staples’s art, Jughead is still wearing his trademark beanie, even though it hasn’t actually been in style since the 1940s. You can modernize Archie, but there are some things you just can’t meddle with.