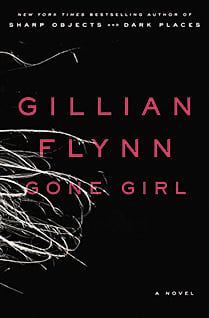 At first blush, Gillian Flynn’s third suspense novel has a typical story to tell. A husband and wife, recently relocated from Brooklyn to his rural Missouri hometown, struggle to adapt and keep their marriage together. Then one day, the husband, Nick Dunne, comes home expecting his wife, Amy, to be there. But she’s not, and the place is ransacked. Days pass, she’s still not back, and who do the police turn to as the most likely suspect, and who do the media indict on-air? Nick, of course. With evidence piling up against him, he finds himself squeezed into a corner he can’t possibly get out of. Or can he?

Flynn, whose previous award-winning books subverted equally typical stories of preteen murder (Sharp Objects) and a family massacre (Dark Places), is playing a whole other game, on a deeper level, with Gone Girl. In a nutshell, nothing you read should be taken at face value. With the help of diary entries and flashbacks, readers come to understand just how twisted the relationship between Amy and Nick is, built as it is upon false premises, high expectations and elaborate treasure hunts to prove one’s love to the other—or, perhaps, to prove mutual hate. And as we realize just how thin the line between hate and love is for this seemingly golden couple, Flynn’s off and running with the next surprising twist.

Most writers wouldn’t be able to pull this off. Flynn, on the other hand, succeeds brilliantly. Gone Girl is a bravura performance that captures the throbbing, visceral pulse of what happens when love erodes into something more malevolent and careens straight into a mutually shared hell.