'Green technology' is fine, but to really save the planet we need to shop less

J.B. MacKinnon’s new book makes the case for the world’s citizens to buy a ‘little less stuff’—or else 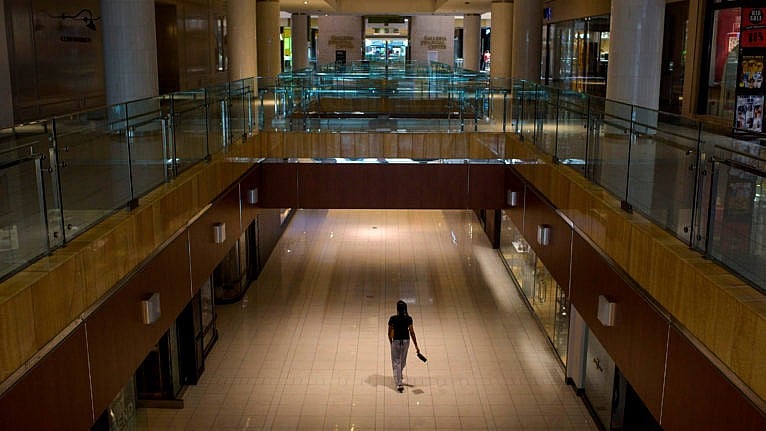 Lockdowns have curbed shopping, making the case for an effective fix for our climate crisis (Mark Felix/AFP/Getty Images)

If the purpose of a thought experiment is to cast new light on familiar phenomena, the better to inspire a cascade of new thoughts on scarcely registered realities, J.B. MacKinnon certainly delivers in The Day the World Stops Shopping. On his way to exploring what could happen in the wake of a sudden 25 per cent drop in human consumption, MacKinnon offers eye-opening explanations of everything from why energy-saving products have not decreased climate-threatening carbon emissions to what causes those mysterious holes in your T-shirt. Shopping begins by noting that, for 50 years, our consumption of planetary resources has accelerated, first in rich countries and then worldwide—to the extent that it passed population as humanity’s greatest environmental challenge around the turn of the millennium, according to the UN’s expert panel on resources. And we’ve barely noticed, the author adds in an interview.

“It’s one of those shifting baselines where the circumstances change so gradually,” says MacKinnon, one of the most prominent journalists in Canada, whose previous books include the Charles Taylor Prize winner Dead Man in Paradise and the bestseller The 100-Mile Diet. Airline travel is the first personal change that comes to his mind. “When I think back to life in the year 2000, comparing the amount I flew then to how much I—and the people I know—fly now, it’s much more. I’m constantly encountering people who take off for a quick break several times a year.” But flight is not alone in explosive 21st-century growth. The number of clothing items bought per person has increased 60 per cent over 20 years, and the number of digital devices has risen even more sharply.

READ: The sense of urgency around climate change is trending up

There is much to unpack in those and related developments. The growth in clothes buying is accompanied by a reduction in apparel cost. In 2000, clothing expenditure represented about 15 per cent of the average household budget; that’s now five per cent. We spend the savings on more but cheaper garments—their average lifeems have been halved—because it’s the thrill of shopping that matters most. (Balance that against the holes that quickly appear in contemporary T-shirts’ thin fabric from being rubbed at the beltline: “I’m glad to explain that one,” MacKinnon laughs. “I hope that helps a lot of people.”)

The contemporary everyone-their-own-phone, a-TV-in-every-room world requires enormous amounts of power, also little noticed by most users. According to one expert interviewed by MacKinnon, when asked about the energy use associated with their phones, most people think only of recharging the batteries, not about the massive data processing centres that allow users to stream the video they watch on those phones. We still associate energy demand and emissions with goods, not services, although they are just as voracious. “Remember when millennials were declared to be the generation that would save the planet because they were shifting from products to experiences?” asks the 51-year-old author. “Well, their experiences turned out to be intensely consumeristic.”

Or consider the arrival of light-emitting diodes (LEDs). They use 75 per cent less energy than older light bulbs and should have made a serious dent in power demands. Instead, we seem to have spent the money saved on . . . more lighting. The enormous video screens on building facades, the 10,000 lights on the Hernando de Soto Bridge in Memphis, Tenn., and the explosion in decorative lighting in private homes and gardens were all made possible by LEDs. Back in 2016, MacKinnon recalls, experts were sure LED use, however widespread, could never cancel out the energy saving. “But now, when I talk to those same people, they say nobody’s going to be surprised if it turns out LEDs are consuming as much or more energy than the technology they replaced.”

The world has also been greening its energy for the past two decades, investing billions in energy-efficient technology and renewable energy in an effort that has yet to reduce carbon emissions for even a single year. “There’s so much magical thinking about green technology,” says MacKinnon. “People buy an electric car and literally feel that it has no environmental consequences.” When there is energy to spare, especially low-cost energy, humans use it. Since the Second World War, carbon emissions have fallen only four times, all during severe economic downturns: the mid-1980s, the early 1990s, 2009 and 2020’s pandemic lockdowns. Emissions only fall, MacKinnon concludes, “when the world stops shopping.”

READ: What will shopping in Canada look like in the aftermath of coronavirus?

So why not give that a try, MacKinnon asks, rather than hoping for a techno-fix to our climate-imperilling lifestyle? Hence his thought experiment. He does acknowledge, however, than an overnight drop in consumption of 25 per cent would return the planet only to the economic activity level of a decade ago. And it would be no solution to our environmental woes, although “it would buy time” to delay the climate shocks widely predicted to start hitting hard a decade from now.

The author’s theoretical model is hardly elegant, but it’s not entirely an imaginative exercise. There is real-life data to support the idea that humans would adapt and that the economic contraction would be, MacKinnon writes, “the end of the world as we know it, but not the end of the world.” Finland suffered a sharp, brutal economic downturn in the 1990s. Most middle-class people in Ecuador live now as most of North America did in 1970, with vacations close to home and restaurant meals as rare treats. Contemporary Japan, slowly depopulating, offers a possible slow- to no-growth future path.

There are places that use less night lighting, and others that effect some sort of common day of economic shutdown, the way Sunday closing once did in most of Canada, a day for a society to reduce its carbon footprint. Most widely shared of all, though, were 2020’s COVID lockdowns, when emissions shrank by seven per cent over the year—more than the global economy itself—while blue skies and animal life rebounded.

The lockdown experience provides the strongest case for MacKinnon’s “de-growth” side. For years, the International Energy Agency (IEA), once one of the leading groups fighting climate change, has taken the position that the only way to reduce carbon emissions is to decouple the emissions from economic growth by greening the energy. Reducing growth was a non-starter, as IEA chief economist Laszlo Varro told MacKinnon: “I am not aware of a country where a government won a democratic election with a program of ‘We want to intentionally reduce your consumption.’ ” But even the best green-growth scenarios do little to stop the emissions tide even while requiring technological and cultural changes hardly more plausible, according to Shopping, than “the idea that the world’s citizens could be persuaded to buy a little less stuff.” De-growth, on the other hand, provides immediate benefits: a 25 per cent cut in consumption equals a 25 per cent drop in emissions.

The dislocation would be massive, of course, including job losses centred in poorer nations, where the rich world’s stuff is made. Clothing factories would be particularly hard hit. Those sorts of socio-economic transitions, like the developed world’s evolution from farm to dark satanic mill to contemporary prosperity, have always been brutal. But they needn’t be, according to MacKinnon. “If we were to make the transition as I would want society to make it, we would pay close attention to who is vulnerable, and when there is less work and less income, to redistribute access to that work and income.”

To that end, Shopping offers practical steps forward. They include lifespan labelling to encourage product durability in a throwaway society—and thereby reduce buying—as well as tax regimes that favour repair over disposability, and a basic annual income that would blunt the job sector dislocation. And ever-practical MacKinnon is even willing to sharply reduce his 25 per cent goal. Start with a five per cent cut, he urges, because carrying on the way we are really isn’t an option. A simpler life awaits us one way or another, “if not through some great awakening, then because civilization will collapse beneath its own weight.”

This article appears in print in the June 2021 issue of Maclean’s magazine with the headline, “More is too much.” Subscribe to the monthly print magazine here.