Hanns and Rudolf: The True Story of the German Jew Who Caught the Kommandant of Auschwitz 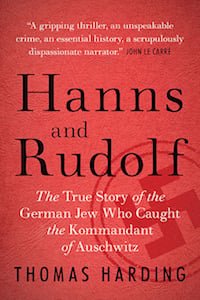 On April 15, 1946, Rudolf Höss testified at the Nuremberg trials of Nazi leaders. To a silent courtroom, he matter-of-factly confessed to having “personally supervised executions” at Auschwitz. “It was not always pleasant to see those mountains of corpses and smell the continual burning,” he told the interrogators. That Höss helped convict his fellow Nazis (and himself) is because of one man, a German Jew named Hanns Alexander, who’d tracked the war criminal to his postwar hiding place on a German farm.

In a gripping tale, Thomas Harding, Alexander’s great-nephew, explores how the two German men took dramatically different paths in life, and how they would intersect so fatefully in 1946. Alexander was born into a deeply assimilated upper-class Jewish family in Berlin. Prone to pranks and jokes, he was raised in a large, loving family. In stark contrast, Höss’s upbringing was filled with brutality, included fighting in the First World War and then, with the paramilitary Freikorps in the Baltic region. Soon he was a member of the Nazi party and, in 1923, was convicted of savagely killing a man. After his release, he started his concentration-camp career at Dachau before being transferred to Auschwitz, which he transformed into a mass extermination facility. For all the daily cruelty of his work life, he lived nearby with his growing family in a luxurious house, staffed by inmates. Family snapshots show children playing while prisoners in striped uniforms walk in the background.

While Höss’s career was flourishing, Alexander and his family were fleeing Nazi oppression to England. Alexander joined the British Army and, in May 1945, he witnessed the horrific aftermath of the Holocaust at the Belsen camp. “There were dead bodies walking about,” he recorded, “people who thought they were alive and they weren’t.” Consumed with rage at the thought of Nazis escaping justice, he tracked down Gustav Simon, the Nazi leader of Luxembourg, then set his sights on Höss. After discovering the Nazi’s family was surviving in an old sugar factory near the Danish border and Höss was rumoured to be living nearby, Alexander subjected Hedwig Höss and her children to four days of harsh interrogation. Finally, she gave up her husband.

Höss was hanged at Auschwitz. Alexander raised a large family and was at the heart of a growing Jewish community in London. He died in 2006.