Helen Humphreys’ latest book is a hybrid of fiction and fact 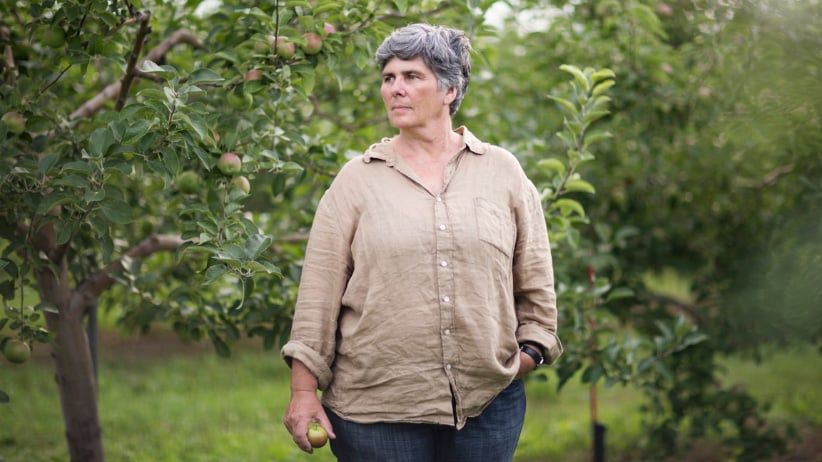 One of the most popular literary authors in Canada, Helen Humphreys, 56, now has a body of work—poetry, novels and non-fiction—stretching back three decades. Recently, her writing has been “morphing,” as the Kingston, Ont.-based author puts it, in a new direction, in response to both artistic concerns and the events of her life. The combination of a dying friend and the discovery of a heritage apple three years ago sent Humphreys on journeys to an Iroquois orchard in upstate New York, destroyed by George Washington’s troops; to the North Carolina home territory of Ann Jessop, an 18th-century Quaker preacher who did far more to spread apple varieties across the continent than Johnny Appleseed; to Robert Frost’s last orchard in Vermont, planted when the poet was in his 80s. And to the genesis of a new book, The Ghost Orchard, which elegantly and elegiacally ties all the strands together.

Q: You began as a poet, then, as you once told me, your “poetry-shaped ideas” began to be “sucked into the black hole” of your novels. Now, something’s happening to the novels?

A: The novels are always morphing into something else now, some kind of hybrid, more of a ground that isn’t so easily specified. I suppose you could call it creative non-fiction, and rather focused on the natural world, which is what I’m most interested in reading these days. At least that would be the closest thing, but my books also include some fiction, so they’re difficult to pinpoint. So call what I’m writing a hybrid. That’s where I’m leaning at this point.

Q: Is that why The Ghost Orchard, which could be prosaically (if misleadingly) described as a history of North American apples, has a small fantasy embedded in it? Two veteran knights make the first known discovery of a particular apple variety in England around 1200, all the while complaining about the hotheaded youth of their day. There are also brief sketches of women artists who painted watercolours of now-vanished apples a century ago. Talk about hybrid.

A: What I like about mixing fiction and non-fiction is being able to fully explore an idea without being bound by genre. If you scratch under any surface there are histories for everything, aren’t there? And there’s unknown women’s history in everything, too. It all gets simplified because its complexity is more than you can stand sometimes. So you need full freedom of expression.

Q: Your last two non-fiction titles, Nocturne and The Ghost Orchard, have been responses to specific tragic events.

A: Yes, to death, my brother Martin, my friend Joanne Page. At this point in my life death’s all around. I’ve always dealt with loss in some form or other in my fiction. But in those books it would have been in a love context. Lately it’s been actual death: I had six deaths in as many years between friends and family members. Seven, if you count the dog.

Q: I would definitely count the dog.

A: She died the same week as my brother in 2009. She was 13. I had just come back from being with him in the hospital in B.C. She died three days later. That was a brutal week. So some of what I’ve been writing since is just processing all that.

Q: Your non-fiction is as brief in page count as your fiction. You once told me you don’t write at great length because your characters are engaged in intensely emotional moments and neither you as a writer nor readers can stay in such places all that long. But that can’t be the case with non-fiction, can it?

A: In some ways I spend longer at non-fiction because there are a lot of different threads to bring together. But non-fiction is more reflective than immersive. The problem with fiction sometimes is that you have to leave the real world to enter the fictional one. And that takes so much, goes into your head for so long . . . I don’t know, I just feel less inclined toward that these days, and more inclined to remain in my own life. I do like really good fiction, but it’s getting harder to hold my attention in a novel. If I start disbelieving it for one small thing, then I don’t want to finish it. Good ones can still have that power, though. Last year I really liked Colson Whitehead’s The Underground Railroad, that was really good, but he did mix a lot of fact in there.

Q: Do you think you might still have more novels to come?

A: I do, because then I’m learning, which hooks my imagination, rather than just commenting.

Q: Would you call it a hybrid, a flip version of your non-fiction hybrids?

A: It’s a couple of years or more from being published, so I’m going to call it a novel for now, because I am essentially dealing with a fictional premise.

Q: Even your one recent novel, The Evening Chorus, is ecologically minded, with characters responding to human-caused chaos by retreating to the natural world.

A: I had the idea for that book before my brother got sick and died, which happened very fast, only four months. But I started writing after his death. So I was influenced by that. But since I had the idea ahead of time, I don’t know how everything fits together. I had been trying to figure out a different way to tell the war story, one that hadn’t been told before, and nature seemed a good lens to view it through. And that was also the lens that I was using to deal with my own grief. Just being out in nature.

Q: That’s how all your latest books seem to have started. You would go outside, go for long walks and think about things. No, actually, you would run into things that would make you think. When Joanne was dying, you encountered a White Winter Pearmain, a heritage apple growing outside an old homestead. Did you know what it was when you saw it?

A: No! Ghost Orchard came from the fact that I spent a long time trying to identify it. It was really hard to find a way to do that. Then I stumbled on these old encyclopedias and began to learn how there were once so many apple varieties. I just went right down that rabbit hole.

Q: Where you eventually found a lot of remarkable history. More apple varieties in the past, sure, but 17,000 kinds in 19th-century North America alone, now down to fewer than 100 commercial varieties.

A: Yeah. Just in North America. It’s so hard to imagine. Apples the size of pumpkins, all those winter apples, apples that would ripen pretty much all through the year—as early as July for the Yellow Transparent. That’s one we still have now. With the winter apples, you would only have a couple of months without fruit. Something else I learned about the importance of apples after I wrote the book came up in Halifax at my first reading from it. A guy in the audience said people in Nova Scotia used to demarcate property lines with apple trees—put one at each corner.

Q: What happened to all the varieties?

A: Refrigeration played a large role—you didn’t need winter apples any more, so that wiped out half of them. Then the grocery stores, which wanted things to be uniform—there go the odd sizes.

Q: Like that Cullawhee you write about, where one measured more than 53 cm in circumference. But if most people know of the declining number of varieties, I think very few are aware that the Indigenous peoples had entire groves of their own. Apples were always miles ahead of the European settlements.

A: Well, I had to learn that for myself, so I don’t think it’s generally known. For hundreds of years before white settlement reached their areas, native peoples were growing apples, making applesauce, drying them for winter use. Their groves were all supposed to be seed-based, which usually only produces apples suitable for cider making, but I think they learned how to graft, because a lot of their varieties became popular with the settlers.

Q: Some went into commercial production.

A: A type called the Indian Rareripe was the second-most-popular variety sold in the 19th century. There were maybe a dozen native varieties, including a Mi’kmaq-grown one from Nova Scotia called the Mic-Mac Codlin. Most were left to disappear, and some were renamed. The way dominant culture always works is to diminish the culture dominated, and renaming—while denying that native peoples knew how to graft—is part of that.

Q: I learned a lovely new word from your book: “scrump,” meaning to gather windfall apples or to steal apples from someone else’s trees. Scrumping around Kingston, you found a good half dozen heritage apples growing on the side of the road or in abandoned fields. This isn’t lost history so much as it’s invisible history—we don’t see what’s right in front of us.

A: That’s right, and that’s the great thing about the heritage apples—they’re still there. You can still taste the past.

Q: In the same way as the continent’s vanished apple groves are a memory now, you conclude the opposite is also true: “Memory is a Ghost Orchard.” Could you expand on that?

A: A ghost orchard, that single tree you find in a field, points to something larger that used to be right there, and to a degree still is. That presence points to a larger presence that is gone. When people die, they leave memories like that tree standing by itself. Where there was once the life of a person, now there is a trace. It’s not them, but it is a trace.