How a tough granny saved the Appalachian Trail

A review of 'Grandma Gatewood's Walk' by Ben Montgomery 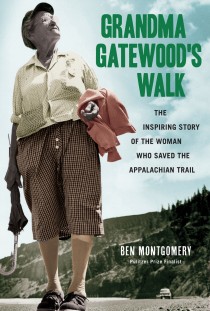 GRANDMA GATEWOOD’S WALK: THE INSPIRING STORY OF THE WOMAN WHO SAVED THE APPALACHIAN TRAIL

Understanding people’s motivations is always interesting. When we don’t understand someone, we speculate: “What did she do that for?” In the case of the 67-year-old grandmother who hiked North America’s longest, hardest trail without a sleeping bag or tent, that was what interested Montgomery. Why did she do it?

In 1955, Emma Gatewood became the first woman to hike the entire Appalachian Trail; five months in the woods, ascending mountains, sleeping on moss and leaves and noting trail sections in need of repair. Before she started, she told reporters she was a widow doing it for a lark. That first part wasn’t true, and the fib led author Montgomery to a disturbing story.

At 18, Gatewood had wed a respected schoolteacher who couldn’t control his temper. He and Emma had 11 children. When her youngest was nine, she fled the family home, explaining later to her kids: “I have wanted to write to you all the time but did not want your dad to know where I was. He is the worst nightmare I ever heard of.” Emma wasn’t the only one who suffered at her husband’s hand. He killed a man in a quarrel and was charged with manslaughter.

Eventually, Emma was granted a divorce. “Multiple times I was black and blue in a lot of places, but mostly my face,” she later wrote. “He would act so innocent and pretend he had not touched me and say I was not in my right mind. He even asked me what asylum I wanted to go to.”

She burned through seven pairs of sneakers over the course of 3,300 km. At the end she told a reporter, “It took me a long time to get to the top and when I did and signed my name on the register, I never felt so alone in my life.” Solitude was her victory.

Years later, Bill Bryson mentioned her for a laugh in his book
A Walk in the Woods. “Emma ‘Grandma’ Gatewood, who successfully hiked the trail twice in her late sixties despite being eccentric, poorly equipped, and a danger to herself. She was forever getting lost.” Emma’s daughter took offence and fired off a letter to Bryson. “Eccentric, perhaps, but kindly, please. Lost, never, just misdirected.” Bryson himself completed less than half the trail. As Emma Gatewood once told a reporter, “Most people these days are pantywaist.”