How to improve your lottery luck 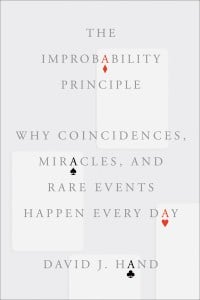 THE IMPROBABILITY PRINCIPLE: WHY COINCIDENCES, MIRACLES, AND RARE EVENTS HAPPEN EVERY DAY

David Hand, past president of the U.K.’s Royal Statistical Society, is something of a killjoy. If you believe there are unexplained, magical forces at work when one person wins multiple lotteries, or feels sympathetic pains when a family member gets hurt, or is dealt his or her own surname in a Scrabble game, this book will leave you disillusioned. Hand’s explanations of seemingly strange phenomena can also drain away pleasure from numerology, films about the number 23, books about secret codes embedded in the Bible, Jungian synchronicity, and the idea that humanity is in any way special.

Skeptics, of course, will have a field day. Hand’s titular principle holds that “extremely unlikely events are in fact commonplace,” and that “events which we regard as highly improbable occur because we got things wrong.” It shows us that when insurmountable odds are surmounted, we simply have to rethink them.

Despite having written books with daunting titles such as Kernel Discriminant Analysis, Hand proves an engaging guide, leading us through equations and the odd graph—usually the bane of any popular tome—with a light and assured touch. Citing references as diverse as Def Leppard’s one-armed drummer, Rick Allen, and Kim Jong Il’s golf game, he explains that “outrageous things” happen in part because so many things happen everywhere all the time—the range of possibilities is so great, it would be even stranger if nothing “strange” happened. It’s just that we become fixated on the events we consider remarkable.

Selection bias can lead us to believe, for instance, in paranormal powers, because of experiments where unpromising results (achieved by the majority of subjects) have been discarded. Related to this is Hand’s “law of near enough,” which holds that many seeming coincidences are simply not-so-special events coloured by our own expectation. Poor Carl Jung, who, with his tales of “resonances” between superficially similar events, gets skewered.

If all of this makes life seem a little too random, the book does offer practical applications, such as picking lottery numbers without overt patterns in order to decrease the chance that you’ll have to split a jackpot if you win. And even though the book declares that the laws governing our universe itself show no evidence of being devised or fine-tuned according to a master plan, it’s not that depressing a read: Hand still makes you wonder at the world we live in, where lightning does indeed strike twice.