The Undercover Economist Strikes Back 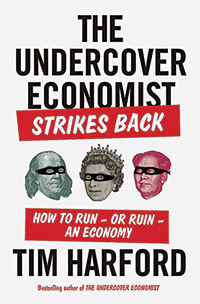 U.S. president Harry Truman once famously remarked about the need for a one-handed economist because his were prone to saying, “on the one hand?.?.?.?on the other.” Sixty years later, it’s safe to say the popular image of the dithering economist hasn’t changed all that much. In the wake of the Great Recession (which, it’s often noted, economists failed to predict), the field’s best and brightest continue to debate the prescription for getting the global economy back on track. Some have argued for a strict round of belt-tightening by governments in a bid to restore people’s confidence in the system. Others have suggested that such austerity measures, as they’ve become known, are precisely the opposite of what should be done, serving only to further bog down the recovery.

Tim Harford, a Financial Times columnist and author of the bestselling The Undercover Economist, wades into this murky macroeconomic world in his follow-up effort and attempts to shed light on why, exactly, running a modern economy seems so difficult. In a nutshell: It’s just plain complicated. “You have 10 billion distinct varieties of product, seven billion people, countless unobservable transactions,” he writes. “The economy is shaped by psychology, history, culture, unforeseeable new technologies, geological and climatic events, computer trades too quick for humans to perceive, and much else.”

Of course, simply throwing up one’s hands is unlikely to make for satisfactory policy. So, in a bid to better explain the challenges facing governments and central bankers, Harford pretends the reader has been handed the job of running one of the world’s biggest economies, with him along for the ride in the role of adviser and explainer. As conceits go, the format actually works surprisingly well, by turning what would normally be an extremely wonk-ish discussion into a lively conversation. Harford’s breezy writing style also makes it easy to digest entire chapters drawing distinctions between Keynesians’ and classical economists’ views on what causes recessions (and therefore what to do about them), or the importance of avoiding a liquidity trap.

Perhaps most important, Harford doesn’t shy away from offering his own views on what’s likely to work, and what isn’t. At one point, he even suggests a “four-step guide” to effective fiscal policy during a crisis—which is about as close to a one-handed treatment as you’re going to get from an introduction to the subject.