How to teach children about child soldiers 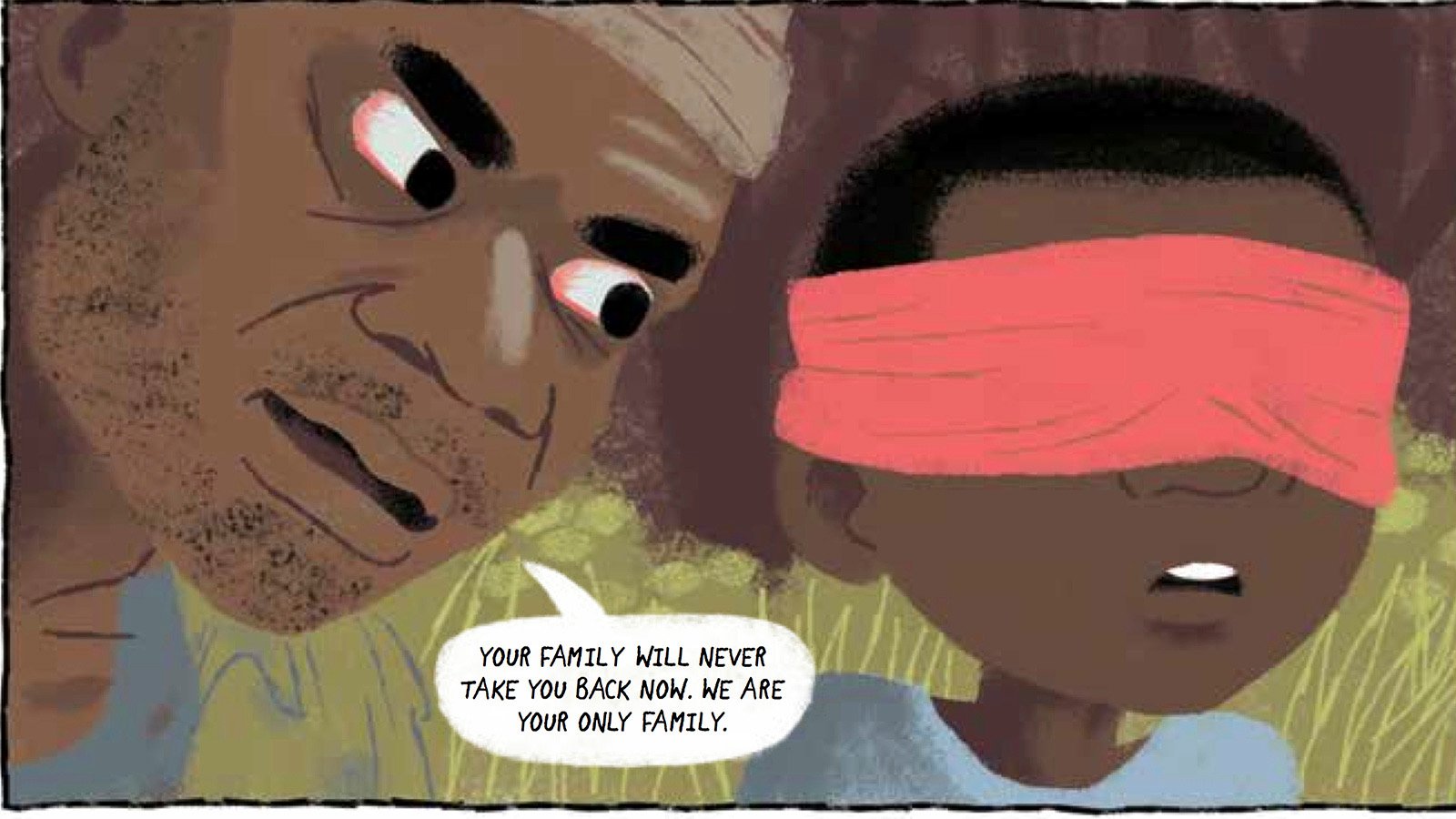 An excerpt from Child Soldier: When Boys and Girls Are Used in War, illustrated by Claudia Davila. (Claudia Davila)

Michel Chikwanine is 27 now, a student in the University of Toronto’s African studies program. He’s smart, engaging, charismatic, even. His present-day life makes his past path here even more unfathomable. Born in the Democratic Republic of the Congo, five-year-old Chikwanine was playing soccer with his best friend, Kevin, and other children when rebel soldiers kidnapped them. As depicted in a real-life graphic story aimed at middle-school readers, a rebel cut open Michel’s arm and inserted Brown Brown—a mix of cocaine and gunpowder—into the wound. Blindfolded and reeling from the drug, he was initiated into the life of a child soldier by being forced to shoot and kill Kevin.

Although Michel soon escaped and miraculously made his way home, the violence of the Great War of Africa—a wide-ranging conflict that killed six million people between 1998 and 2003—eventually followed him there. At age 10, beaten, sliced across the cheek and held immobile, he watched as soldiers raped his mother and sisters. Later, when the entire family was together in a Ugandan refugee camp, his father, a vocal human-rights advocate, was murdered. It was only then that Michel, his mother and youngest sister were fast-tracked as refugees to Canada. His older sisters, as adults, had to apply on their own. One disappeared, never to be seen again. The other did make it to Canada, bringing six children, her own and her sister’s.

Michel was 16 when he arrived in Canada, into cold he’d never dreamed of—Ottawa in January—and into a teenage milieu even more disorienting, where the biggest source of adolescent angst seemed to be having the wrong cellphone. “In my head, I was thinking first, ‘I want that phone, because I can’t afford it,’ ” Chikwanine wryly recalls in an interview. “And two, the girl complaining about the colour of her model didn’t know her cellphone was causing the war in the Congo, a war over minerals. That’s when I realized people need to know what’s causing conflict and atrocities across the world. They have no idea what being a refugee means. It means you’re a nobody—because you have no papers, you have no say in your life.”

It was easier said than done, of course, for a traumatized Chikwanine to recall his painful story for Child Soldier: When Boys and Girls Are Used in War, one of Kids Can Press’s CitizenKid books. The opportunity to do so arose when retired general and ex-senator Roméo Dallaire, now a full-time advocate for child soldiers, was unable to find the time to write such a book himself.

Dallaire and Chikwanine, two survivors of the dark places, physical and psychological, evoked by Child Soldier, have a high regard for one another. Michel’s “lived experience, coupled with his powerful advocacy work, makes him a critical member” of the advisory council for Dallaire’s Child Soldiers Initiative, says the former general, while Chikwanine simply calls Dallaire “one of my greatest heroes.” On Oct. 6, when Michel formally launches his book at the Toronto Reference Library, Dallaire will introduce him.

Chikwanine had to sit down with co-author Jessica Dee Humphreys and, “day after day, go through my feelings back then,” then do it all over again with illustrator Claudia Davila. He’s rightly proud of the results. “Claudia portrayed the emotions that came out in a way younger children can take in.” Rather than depicting violence, Davila uses a palette that darkens when horrible events near, and a perspective that is always that of tiny Michel looking up at his larger tormentors.

Humphreys and Davila together handle the sexual assault at the Chikwanine home with an age-appropriate sensitivity. Chikwanine, though, is particularly pleased with the treatment of the years between the kidnapping and the attack on his family, the years of his “stripped-away” childhood. “Claudia does an incredible job of portraying my attempts to be a normal child again. I couldn’t play, I couldn’t pretend. I thought about Kevin every night.” Whatever children make of the rest of Michel’s story, that sadness will remain with them.