Are we wearing out obscenities?

Humans are a profoundly foul-mouthed species, as anyone who’s taken part in an emotional argument, listened to a toddler recite the words she’s picked up from her family, or hit a thumb with a hammer—that is, all of us—can attest. And more so than in the not-so-distant past too, according to the scholars who are increasingly taking an interest. However they approach the topic—as an extension of slang in Michael Adams’s In Praise of Profanity, for instance, or from the neurolinguistic perspective of Benjamin Bergen’s forthcoming What the F—the consensus opinion is that we are living in profanity’s sweet spot. A respectable granny can now drop f-bombs, have an emotive effect, and still maintain respectability.

But what can be gained on the roundabouts, Adams cautions in an interview, can be lost on the swings. If we keep the obscenity stream going at our current levels, we may possibly wear the sheen right off what have been sturdy favourites for a long time, from centuries to well-nigh forever. And that would be mind-boggling. “Profanity is socially useful because it is socially risky,” says Adams. We need linguistic boundaries to transgress in order to register objection, pain and social solidarity, and it’s precisely the transgression, not the words, that matters. Consider five words for sexual intercourse: “copulate,” “f–k,” “screw,” “swive,” “boink.” Only one is partially blanked out because only one is socially agreed to be profanity. On the flip side, “f–k off” has no sexual meaning at all.

Profanity is so emotionally powerful we store it in another part of the brain, away from everyday language: that’s why people otherwise rendered speechless by stroke or brain damage can, when the frustration of their situation boils over, still yell, “God f–king dammit.” Profanity even has its own syntax. The construction “I don’t give a [enter obscenity or euphemism of choice]” cannot be used with a regular English word; likewise, “What the . . . ” can be completed by certain profanities or euphemisms or left blank, but not filled out with an ordinary word.

In short, if English should lose its surprisingly small profane vocabulary set through overusage, we would be forced to invent new obscenities. That would be no easy task, given the polished perfection of what biology, time and chance has already bequeathed us. 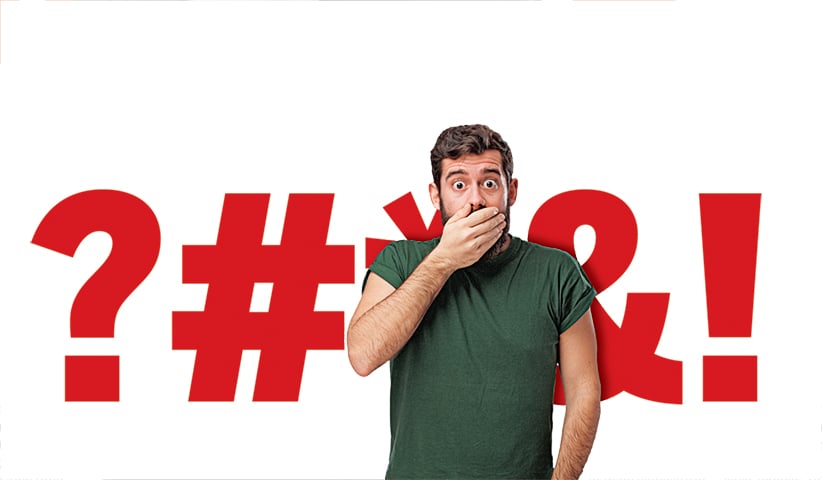 Every human culture there ever was has had an object of disgust ready at hand (sometimes literally), and if feces-flinging chimpanzees are anything to go by, so did our remote ancestors. Chimps indulge in this behaviour only in captivity, notes Adams, who dryly calls it “an attempt at interspecies communication.” Quite possibly a successful one, too: “Any keeper who gets a faceful also gets the point—they’re unhappy.” Add to that the fact the chimps most active in throwing tend to be their group’s best overall communicators—just as precociously potty-mouthed children tend to outscore their more polite peers on language tests—and it seems certain that s–t, as metaphor as much as fact, has followed every stage of human evolution.

Now s–t covers bad things that happen, stuff we own and judgments of quality. In those extended meanings it has no real euphemism—for many, “crap” is a synonym, not a euphemism, and no one ever complains about having sat through a “poopy” movie. It does, however, have some as an expletive: “shoot” and “sugar,” both retaining the initial “sh” sound. As for the biological function, we don’t even recognize the euphemisms as such any more: it’s doubtful anyone seeking a washroom or bathroom is primarily interested in cleaning up, a situation caught exquisitely by a Dr. Seuss character who sought permission to “go to the euphemism.”

But “s–t,” that universal constant, is less than half the story and is, anyway, more a vulgarity than a profanity. The latter is defined in opposition to the sacred, which is culturally determined. Western religion has serious issues with taking the name of God in vain, meaning whole forests of euphemisms have grown up to cope with the manifestly unstoppable tendency to violate the Second Commandment, some so faded they’ve lost all connection to their historical referents.

Even pastors, in an excited moment, are fully permitted a “golly” or “gosh darnit,” although they may be more aware than their congregations of having just uttered “goddammit.” “Gee whiz” and “geez Louise” are scarcely recognizable now as stand-ins for “Jesus Christ.” Some blasphemy euphemisms are so restricted in their survival, lingering on only in specific phrases, that their meaning is lost— “bejesus” began life as a standard oath (“By Jesus!”), but is now just something that can be frightened out of you.

Probably nothing was as lost to memory as “Jiminy Cricket.” Starting life in the 19th century as a standard, purely linguistic euphemism for Jesus Christ, gradually becoming personified (so to speak) in the popular imagination as an actual creature and becoming associated with the “still small voice” of conscience and the bug-in-the-ear whispered confidence, Jiminy reached Disney apotheosis in 1940’s Pinocchio: Jesus Christ as an elegant, mannered, conscientious . . . cricket. 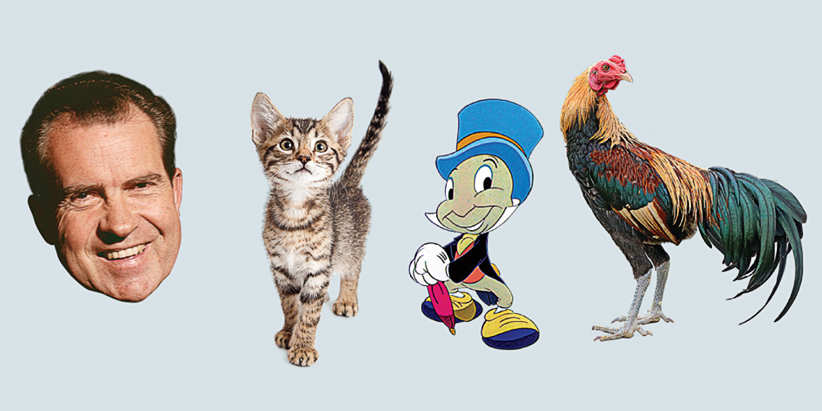 Suspended between heaven and earth—to put the latter euphemistically—lies the king of obscenities. “F–k”—the all-purpose noun, adjective, verb and expletive—rules. There are other taboo terms that warrant word status—the n-word and, increasingly but not quite totally, “c–t”—but only “f–k” also supports “bomb.” The three main sources of profanity mash-up in ways we barely notice, from “Jesus f–king Christ” to “holy s–t,” with its bizarre connotations of excrement worship. Joined with the odd female or homophobic slur, from “bitch” to “c–ksucker,” they are pretty much it for some of our most powerfully emotive words.

Even that overstates the size of our storehouse by underemphasizing the power of “f–k.” Emerging into English at least by 1475, “f–k”—an intensely male term to start, derived ultimately from verbs denoting “striking,” “rubbing to and fro” and “penetrating”—did battle with “swive,” the former favourite for unvarnished sexual congress, throughout the 16th century. The Reformation was a huge aid to it, by sweeping away, in its assault on medieval Catholic custom, all the oaths not specifically banned in Scripture—the “zounds” (God’s wounds) and “by God’s bones.” They no longer had religious validity and, for that reason, transgressive force. In obscenity, as in all else, nature abhors a vacuum, and “f–k” had space to colonize. (Protestantism’s emphasis on purity, Adams adds, probably helped too: references to more earthy physicality picked up greater transgressive power than they have in many other languages.

But “f–k” climbed to the top, vanquishing “swive” along the way, according to Adams, not because it was a better word for sex, but because it was a better word, period: its combination of explosive consonantal start, short vowel and hard ending—all coloured by the emotional flavour of a sexual term—made it just right for an expletive. When you spill coffee on your new white shirt, yelling “swive!” doesn’t cut it. From expletive to intensifer—“you f–king idiot!”—to literally every other syntactical niche, “f–k” took over.

Given its perfection for the jobs assigned it, and its near universal recognition, it’s hard to see it ever disappearing. But nothing is eternal in language, as Benjamin Bergen’s tale of the barnyard fowl, the human male member and a certain personal name shows. 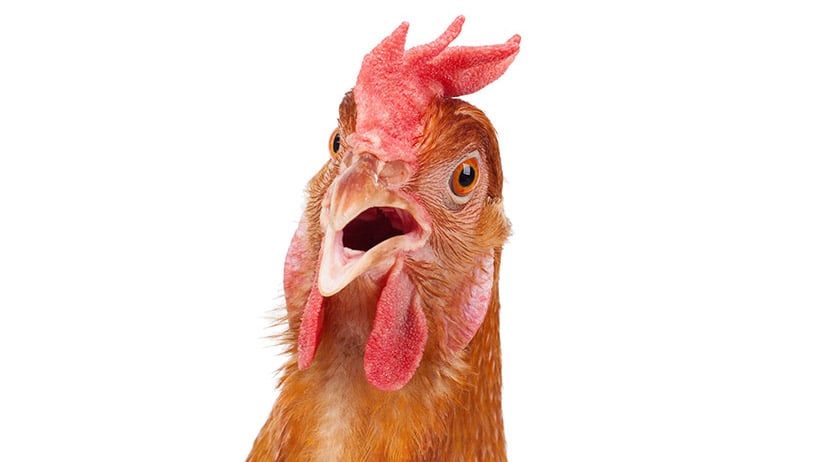 A rooster on a white background. Shutterstock.

The word “cock” is as old as any recorded in English, and for the almost the first half of its millennium-plus life meant only the sort of cock that is a bird. In the 15th century, and increasingly thereafter, it came to mean a human penis as well. It’s easy to imagine how: in an agricultural society the similarities of behaviour between, uh, cocky young men trying to impress girls and the strutting kings of the barnyard would have been inescapable. The two meanings coexisted until more censorious cultures (i.e. Puritans) found it impossible to have a decent, straightforward conversation about animal “husbandry” (talk about euphemisms) without coming up with a new name for the bird. Hence “rooster,” a word that sounds as old as the Battle of Hastings, but which is first recorded in the 1772 diary of a Boston schoolgirl.

Soon after, “cock” as “penis” was facing a new rival, “dick.” A name as old and common as Tom and Harry, “dick” went the way of “cock” by 1900—but only in an underground fashion at first, and right up to the 1960s hundreds of newborn Americans annually were given the name. An early election ad for Richard Nixon, “Tricky Dick” himself, reads, astonishingly to contemporary eyes: “They can’t lick our Dick.”

By 1968, though, newborn Dicks were falling right out of the birth registers, replaced by Ricks. The same is happening now with pussy: many people never use it to refer to a cat, and more are likely to follow. Profanity sinks deep emotional roots in our brains, and when words develop duelling meanings, the bad stuff almost always wins out. We can’t live without it.