On the difference between comics and drawing, how having a child changes everything and why books are definitely not dead 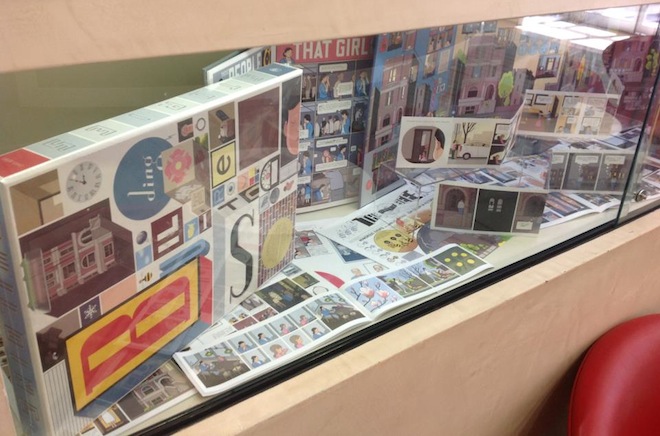 'Building Stories' disassembled from its box (photography courtesy of Pantheon)

After five years of serializing the story in his ongoing comics series, Acme Novelty Library, comics artist Chris Ware released Jimmy Corrigan, the Smartest Boy on Earth in late 2000, ensuring his place in the comics pantheon. In 2001, the book won both a Harvey and an Eisner, two of the most prestigious awards in the comics industry. Jimmy Corrigan was a success for both Ware and for the art form itself: by winning an American Book Award and the Guardian First Book Award, Jimmy Corrigan had succeeded, like Maus had so long ago, in convincing an often skeptical world that comics could and should be considered “high” art, worthy of study and critical discourse.

Ware’s latest graphic novel, Building Stories, is a collection of narratives that had been serialized for years in Nest Magazine, The New Yorker, and The New York Times Magazine, as well as in Acme Novelty Library 18. And it’s no ordinary book: the 14 books, booklets, magazines, newspaper, and pamphlets are housed in a large, ornate cardboard box.

Building Stories transcends traditional, linear narratives by chronicling the life of one woman the way one remembers their own life: in spurts of memories, some specific and some broad, some linear and some jumbled, some contained and others, overwhelmingly enormous. Her life, as tedious, joyous, mundane, depressing, and overwhelming as yours and mine, is told largely from her own perspective, but at times from those of her neighbours, her landlady, and her crumbling, time-ravaged apartment building. Like all of Ware’s work, it’s both formally inventive and strikingly poignant, imbued with his acute understanding of visual storytelling and human interaction.

Over the phone from a hotel in Boston, Ware is as careful and thoughtful with his responses as he is with each of his comics panels, speaking softly and articulately about how to read Building Stories, the nature of human memory, storytelling, and the relationship between life and art. 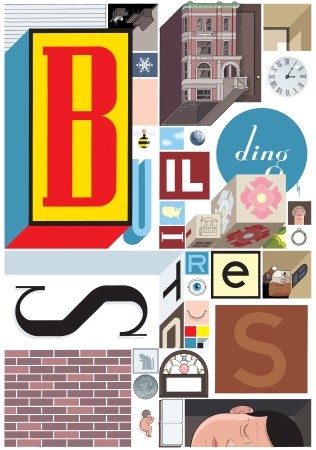 The cover of 'Building Stories'

Q: How does the box reflect the way you think about life and narrative?

A: What I was trying to do was reflect on the way I think about and remember the world, which is in a more three-dimensional way. I think everybody thinks about and remembers the world in that way. There’s no beginning or end to this book; there’s no preferred way of beginning, there’s no one book that one should start with. Whatever book happens to catch the reader’s interest is the one that he or she should begin with.

Q: We don’t really read in a linear way anymore–we flip around channels and websites, and we choose what catches our interest, rather than waiting for the next logical part of a story.

A: Yes. The fact that we all walk around looking into these glowing pits now seems like a natural progression, what the human mind does anyway. We exist in the present, but we spend the majority of our time thinking about the past and worrying about the future. We don’t really experience what’s going on in the exact moment.

Q: And the same way we live in the past, so, too, does your book live in all moments at once. Because there’s no beginning and end, it’s cyclical.

A: What I wanted to get at was this sort of feeling that you can’t put into words–so I tried to put it into pictures–that one gets lost in thoughts so deeply that a sense of the present disappears from around oneself that one can almost feel like they’ve been transported into the past, and lost in a past memory. Then, you’re sort of just jolted back into the present reality again by your own mind. As a sort of lost, lonely twentysomething, the thought of becoming a father in my forties seemed almost like science fiction to me, it seemed so remote in so many ways. Now, as a father in my forties, that 20-year-old person seems sort of strange and removed from me, even though it’s me, somewhere, buried alive inside of me still. These different versions of ourselves sort of coexist and define what we are. Maybe it’s a little self-conscious or pretentious, but that’s what I was trying to get at with the book.

Q: You’ve previously made a distinction between comics and drawings. Could you explain that?

A: The fundamental difference between drawings on their own and drawings for comics is that drawings for comics are intended to be read in the same way as words. Words printed on the page are not intended to be “looked at” or scrutinized; they’re symbols by which one passes to get an idea and create an image in the mind. That’s not to say someone couldn’t use a detailed drawing in a comic strip and have it carry some weight or emotional content, but I’ve found that in my own work, it doesn’t work as well that way. I want the reader to get past the drawings very quickly, read past them quickly to try to get at the reduced ideograms that fill our minds and get projected back out on the world.

Q: I noticed that in Building Stories, you abandon the mode of symbols in places in favour of drawings — close-ups of face that show plenty of emotion, with full eyes, brows, lips, and such. Why was that important to this book, and not to Jimmy Corrigan?

A: It was my attempt to get at different states of mind and different feelings and moments in consciousness where one feels a little bit more in the moment, or outside of oneself. It’s sort of a strange reciprocity reading comics: the more information shown, the more on the outside of the image you are.

Q: If you construct a narrative arc to Building Stories, we find a woman whose two selves ultimately end in tension — she’s disappointed she never realized her artistic potential, but at the same time, she’s elated to have created something as beautiful as her child.

A: My life changed completely when my daughter was born. I’ve said this before, but it divides your life. It places a zero point in your life when your child is born: everything that came before leads up to that and everything that comes after emanates forthwith. It lends meaning and a centre to one’s life that is otherwise not there. Many of the pages in the book are organized from the centre out for that reason. In the main character’s case, she went to art school, then got an unrelated job, which I think is common for a lot of people who went to art school. There’s an unfortunate setup in our culture where you either have kids or you make art, but you can’t do both. This is not only untrue, but I think it’s unfair, to expect people to choose between the two. It also places a pejorative on having children. I don’t want to give too much away, but the book itself is supposed to embody and represent what the main character perceives as her abandoned creativity, but it’s a dream object, in a way; most people, at one point or another, might have a dream where they read a book, or see a painting, or hear a song that they find profoundly moving, then they wake up and find that they’ve imagined it entirely themselves. Now, where did that book, or that painting, or that piece of music come from? How can they get at it? It actually existed for a few seconds in their mind. The book is supposed to get at that.

Q: What did Pantheon say when you proposed this?

A: Needless to say, I was pretty hesitant about bringing it up, but Chip Kidd and Pantheon editor Dan Frank were both very, very receptive and kind about it. To my amazement, they were able to make it a possibility. They weren’t put off by it at all; they seemed to kind of enjoy finding out a way to make it a reality. There’s so much that can still only be done in print. I don’t think it’s a very cost-effective way for disseminating news, because there’s no more competitive medium for news than something that can change itself every second. But in my own case, when I finish a story, I don’t want it to keep changing: I’d like it to be certain and contained and un-malleable. That doesn’t mean you couldn’t make art that changes every second and is malleable as time goes on, but paper gives “all-encompassing-ness” to an image that an e-book can’t. I don’t believe the book is dead at all. Literature and art are completely different from news and information; you can’t group the two together at all. They’re completely separate. So, as long as people are still interested in it, it isn’t dead.

A sampling from Building Stories, courtesy of Pantheon: 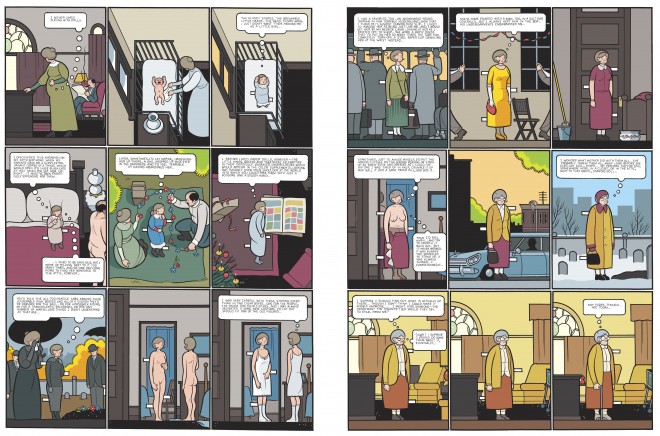 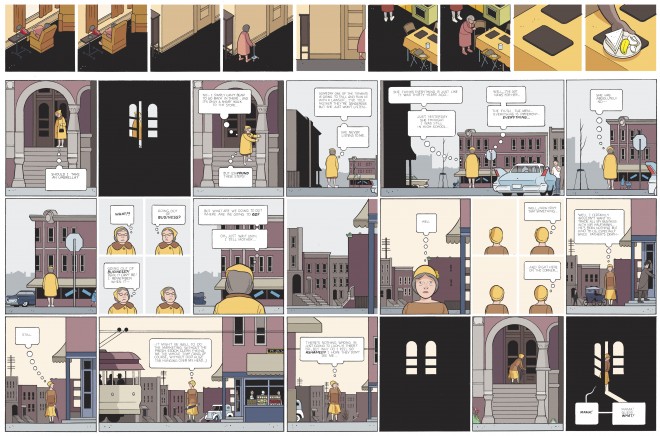 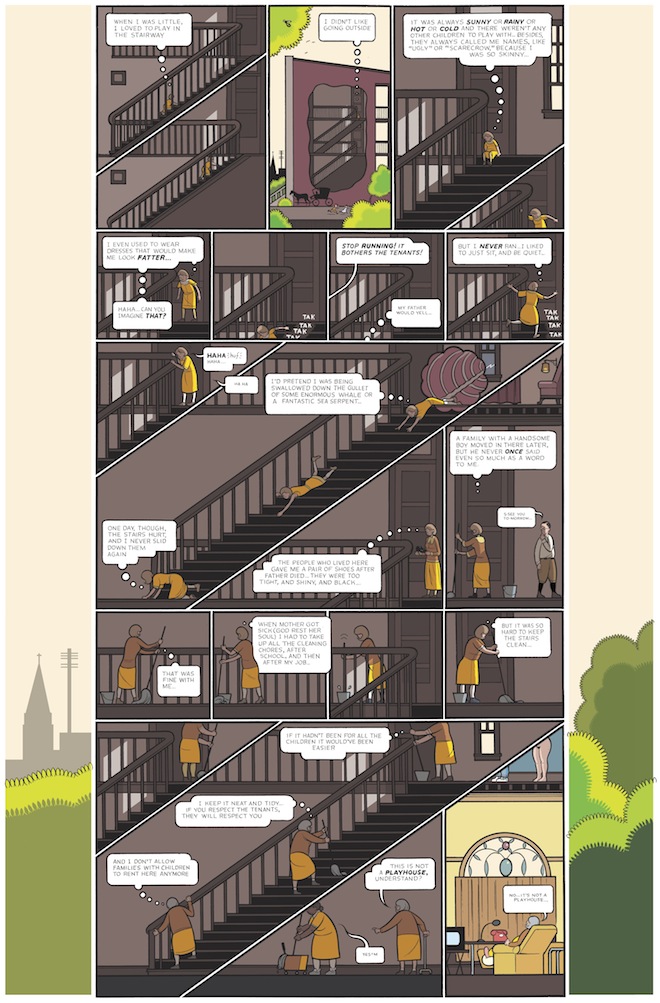 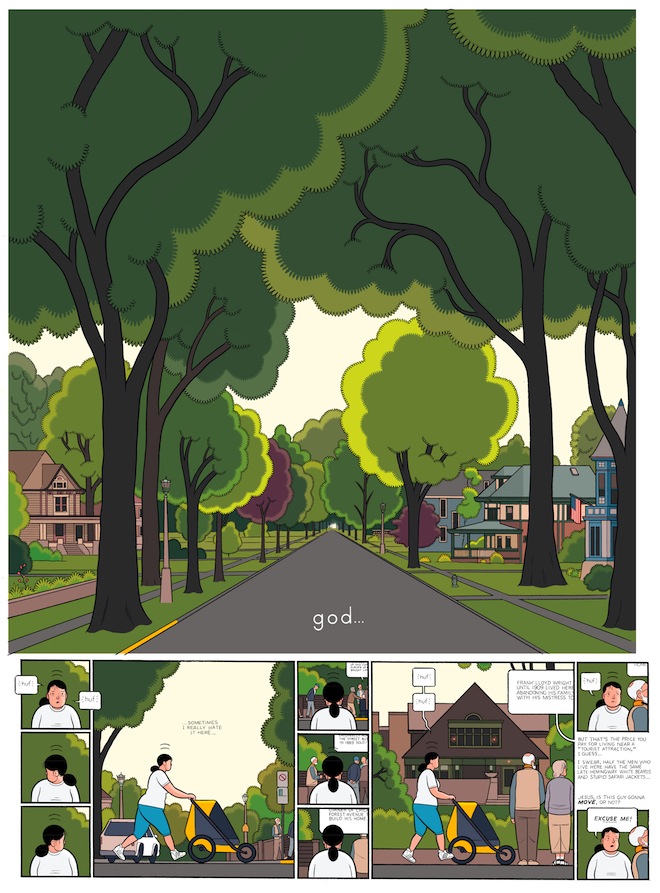