In Vietnam, forgetting the 'American war' 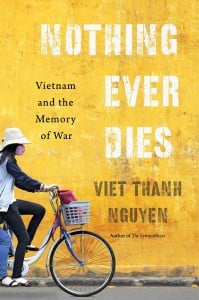 Memory is much on our minds now in regard to war, if only because we are reliving, through 100th anniversary lenses, the war that changed the way we remember war. To read Nguyen, a beautiful stylist and a subtle prober of secret aches and open wounds, on the Vietnam War—or, as they call it in Vietnam, with greater respect for grammar, the American War—is to look through a glass darkly.

That’s true even for Canadians, who weren’t there, much more so for Americans in general, and an exquisitely painful reality for Nguyen, who calls himself  “born in Vietnam but made in America,” a man of personal memories he knows are suspect. Four years old when his family joined the exodus of Boat People refugees, Nguyen remembers soldiers firing at their boat; his older brother, seven at the time, denies it ever happened.

Now an associate professor of English and American studies, he knows both memory traditions well, from the moving (the veterans memorial in Washington, the roadside cemeteries, lying thickly upon the ground, of Vietnam) to the far less beautiful. Those who remember the American War think little of their former foes but are more likely to recall the role and fate of women and children—including their disproportionate presence among the 7,000 who have died from still live bombs in the years after the war ended—than those who remember the Vietnam War. The latter are more cognizant of enemy combatants, but focus on warriors and resisters, with no thought for those “who made the bullets and delivered the bullets and paid for the bullets, the distracted, complicit citizenry.” Neither side has much room in memory for the South Vietnamese, “who stink of loss, melancholy, bitterness and rage,” and none at all for the mass death the two sides jointly brought to Cambodia and Laos.

All wars are fought twice, Nguyen notes, once on the battlefield and again in memory, a trench struggle waged with monuments, “true” war stories (the quotation marks are Nguyen’s) and art that makes up the heart of Nothing Ever Dies. Thanks to Hollywood and the dominance of the English language, America, which lost the hot war, has won the memory war, showing how the plastic surgery of soft power “cuts, tucks and transforms memories.”

The search for what Nguyen calls a “just” memory is far harder than it seems. Most people, after sufficient time has passed, are willing to accept their shared humanity with their enemies, perhaps especially when that understanding casts a cloak over their shared inhumanity. Humans do have to forget—there is no progress, no real life, without forgetting, Nguyen argues—but that’s not the way. The things to be forgotten must be freely offered and openly acknowledged. War has to be buried twice, once at the peace table, and again in memory.