In his new book, Ian Brodie—Harper's former chief of staff—gives a behind-the-scenes look at how the Tories outmaneuvered Stephane Dion on Afghanistan in 2008 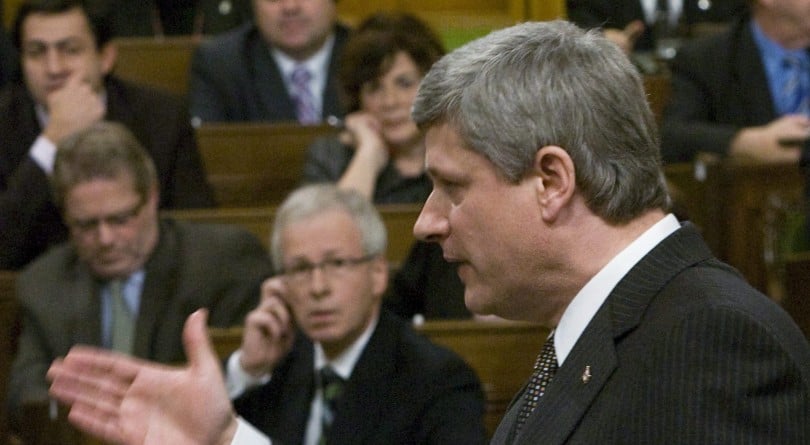 Prime Minister Stephen Harper responds to a question from Liberal leader Stephane Dion, back, during Question Period in the House of Commons on Parliament in Ottawa Tuesday Dec. 2, 2008. THE CANADIAN PRESS/Tom Hanson

For years, Ian Brodie—the former chief of staff to Prime Minister Stephen Harper and former executive director of the Conservative Party of Canada—has seen up close how Parliament Hill works. Now a professor in the department of sociology at the University of Calgary, he’s written a new book, At The Centre Of Government, which mines his insider experiences to explain how Canada’s federal government works and how power is wielded by Parliament’s many constituent parts. Here, in an exclusive excerpt, he explains how Harper’s Prime Minister’s Office managed to pass legislation in the House to extend the military mission in Afghanistan in 2006 and again, in 2008, when the Conservatives faced Stephane Dion—a telling look at the constraints of a minority government, and what it takes to achieve a government’s ambitions in the House of Commons in the face of an increasingly hostile opposition.

One issue that kept returning to our parliamentary agenda was the military mission in Afghanistan. By the time Harper took office, Canadian troops had taken charge of the NATO military effort in Kandahar province, a rough piece of the country and a focal point for Taliban planning. A few months into the Harper government, Canada and our allies launched a dedicated effort to destroy the Taliban presence in southern Afghanistan that culminated in early September 2006. “Operation Medusa,” as the final effort was known, destroyed the Taliban’s ability to bring massed forces together on the battlefield and drove them to adopt irregular, guerilla warfare tactics.

The Conservative election platform for the 2006 campaign, Stand up for Canada, included a promise to “Make Parliament responsible for … the commitment of Canadian Forces to foreign operations.” The issue of parliamentary involvement in decisions to deploy Canadian troops abroad is a long-standing controversy. The power to deploy the Canadian Forces has remained a “prerogative” power of the executive since Confederation, although Prime Minister Mackenzie King asked the House of Commons to concur in the deployment of Canadian troops prior to entering the Second World War. Over the years, the Reform Party had introduced several proposals to bring Parliament back into the decision-making loop; as Canadian troops deployed to Afghanistan all parties came to demand some parliamentary input into military missions. The practical impact of a parliamentary resolution would be slim when a majority government is in office but eventually proved to make matters trickier when Harper headed a minority government.

In spring 2006, Harper faced the decision of whether to extend Canada’s deployment to Kandahar beyond winter 2007. He was determined to bring the matter to a vote in the House. He was well aware that to win the House’s support for extending the mission, he would need to have some support from the opposition parties. He and I met with the Bloc leader, Gilles Duceppe, and Bill Graham, the interim leader of the Liberals. Despite their deep differences over Canadian federalism and most other policy issues, Harper and Duceppe had a good professional relationship and their private conversations were always productive and clear. I like to think Duceppe appreciated Harper’s efforts to master the French language. They were alike in seeing themselves as outsiders to the country’s dominant political and business leadership groups. We left the meeting with Duceppe anticipating we would have the Bloc’s support for continuing the mission. The meeting with Graham was more nuanced. We knew Graham was in a weak position as an interim leader and that some of his caucus colleagues were deeply opposed to the mission. Graham was a former defence and foreign minister and a genuine inter- nationalist, however. He clearly favoured carrying on, but it was far from clear how many of his Liberal colleagues would follow his lead in supporting the mission. Harper led a one-day debate on the future of the mission in the House, proposing to extend the mission until February 2009. The Bloc ended up opposing the mission, but Graham carried the majority of his caucus and the motion passed easily.

Any hope for any easy repeat of the May 2006 vote in spring 2008 was killed off once Stéphane Dion became Liberal leader at the end of 2006. As Liberal leader, Dion took an increasingly critical line on the conduct of the mission and became convinced we were withholding details of the mission from Parliament. By summer 2007, it was clear we would face a difficult time securing parliamentary support for a renewal of the mission in 2008 unless we did something to change the political context. During that summer, the Prime Minister’s Office and Privy Council Office planning exercises for the coming year separately floated proposals for a “red ribbon panel” or a “blue ribbon panel” to take stock of the mission and propose a path forward. Everyone thought that former Liberal Cabinet minister John Manley would be the ideal chair of such a panel regardless of the colour of its ribbon. Manley was out of politics and enjoying a “post-partisan” life, but followed developments in Afghanistan quite closely. He was known to be a hard-nosed policy thinker in the small-l liberal internationalist tradition. I met with Manley and once I assured him that Harper intended to appoint serious people to the panel and would not appoint anyone over Manley’s objections—we were already had the five members who ended up on the panel in mind, and I shared that list with him—Manley agreed to serve.

READ MORE: The coalition and constitutional crisis that shook a nation

The final report of the panel did not, initially, persuade Dion to support a reconfigured version of the deployment. There was a furious debate about the Manley Report inside the Liberal Party. At times I was drawn into those debates through backchannels. I was amazed at how weakly Dion was connected to his caucus colleagues and even to his own staff. Senior caucus and staff members, some with long political and government experience, had only the thinnest relationship with their leader. No matter what assurances we tried to give in public and in private, Dion always seemed suspicious we were trying to pull a fast one on him over the parliamentary vote.

When we guessed the time was ripe for a higher-level meeting, Harper invited Dion to his Centre Block office. Fortunately, he also invited Conservative House Leader Peter Van Loan to join the meeting and asked me to make sure Dion’s staff invited Liberal House Leader Ralph Goodale as well. In public, Harper was starting to speak about how he might need to go to the public if the House could not settle on a future for the Afghanistan mission. He needed Dion’s support to avoid an election. When the meeting began, I soon realized that the Liberal leader had not brought a position to the meeting, or even a starting point for negotiations. He started his part of the meeting by reading the passages in the Manley Report that were critical of our government’s conduct of the mission. Harper readily conceded the criticisms that Manley had made, and asked Dion if he had any suggestions for improving Parliament’s ability to track and debate the mission. Dion ignored the opening and kept on reading critical comments from the report. The more Harper tried to steer the conversation toward a discussion of the path ahead, the more Dion wanted to highlight the mistakes that had already been made. Eventually, Goodale stepped in to talk about how a motion to extend the mission might be worded and when the debate might be held. Goodale quickly worked out an agreement with the prime minister about next steps. By the time the parliamentary debate on the mission was held in March 2008, just before the NATO summit in Romania, Harper had asked the Liberals to put their conditions for extending the mission on the public record and then, in a speech to the Conference of Defence Associations Institute, he agreed to all those conditions. The motion he put to the House set 2011 as the end date for the mission. It also promised a better mix of diplomatic, development, and military efforts in Afghanistan (as recommended by the Manley Report), and struck a House committee to serve as a continuing forum for parliamentary discussion of the mission.

Any worry that getting Parliament’s approval of the mission would limit political debate about it turned out to be groundless. When there is a minority government, a parliamentary motion to support a deployment will almost certainly be a confidence matter. Given that Dion’s initial hard line on the mission forced the Harper government to regroup and commission the Manley Panel, the prospect of the parliamentary vote improved the government’s oversight of the mission, but it did not stop the Liberals or anyone else from criticizing the mission in the House and elsewhere. When there is a majority government, the opposition parties will be free to oppose any proposed military mission and criticize the conduct of it without limit. Even when the result of that vote is a foregone conclusion because the government has a majority and is firmly behind the mission, the parliamentary debate forces both sides to state their positions in public. The government has to offer a justification of the mission. It will face questions about its strategy, the resourcing of the mission, and its coordination with allies. Where the outcome of the vote is not a foregone conclusion, there may have to be some give and take between the parties, give and take that still lets the opposition criticize the conduct of the mission later. The index of Hansard during the Harper government shows no shortage of debate, criticism, and commentary about the Afghanistan mission in Parliament.

I regret that Stephen Harper and Stéphane Dion did not develop a better personal relationship as party leaders. Politics is competitive, and we did our best to keep Dion away from power, but he could have had more impact along the way. During the Afghan vote discussions, I realized he has only one tool in his political toolbox—the polemical argument. He used that tool beautifully to point out the poor arguments in favour of Quebec separation in 1995 and 1996. In doing so, he drew heavily on arguments that Harper had advanced years earlier. Like all of Dion’s political science colleagues, I was proud of his contribution to the debate. But his polemical skills left him unable to think through a path ahead for himself, his party, or the country in prosecuting the Afghanistan war. Churchill’s polemical attacks on British policy in the 1930s made him uniquely qualified to lead the war effort once he became prime minister. Dion did not seem to be able to follow the same path.