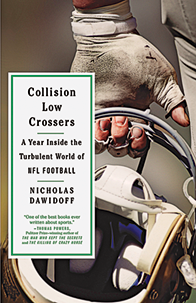 Collision Low Crossers: A Year Inside the Turbulent World of NFL Football

Football, with its gnashing gladiators and full-hearted sacrifice of the body, lends itself well to narrative non-fiction, in the tradition of George Plimpton’s gonzo Paper Lion or Buzz Bissinger’s heartfelt Friday Night Lights. But the game still somehow remains an enigma, laden with well-guarded dark corners and taciturn tribalism, plodding slowly on issues such as concussions and gay rights. But none of that daunts New Yorker contributor Nicholas Dawidoff in this chronicle of his immersion with the 2011-12 New York Jets, a team that had been, to that point, mere inches from advancing to the championship round in two consecutive years. “The significance of it all,” he writes, “seemed to be that, in an age of exposure, the thing Americans liked best operated in almost total seclusion. Maybe the exotic pull increased the pleasure, and perhaps also those who watched were afraid of what they’d see if they got too close.”

So Dawidoff gets close for us. Even the book’s title—named after a stratagem where linebackers assault oncoming receivers for precisely as long as it’s legal—is a nod to readers that he is unafraid of declassifying the bafflegab. But an immersion also makes it easy to slip into hagiography, and the book’s star is undeniably Rex Ryan, the ebullient, snack-adoring head coach, who veers between magnetic father figure and hypnotizing cult leader. Ryan even converts Dawidoff into a doe-eyed child: “[He was] the adult version of the sort of kid you always wanted to be with, because he could make anything involving.”

Football fans will take exquisite pleasure in the insider chatter from the Jets’ draft bunker, savour the coaches’ dissension behind player decisions such as signing divisive quarterback Tim Tebow, and relish the details of how a team so close to the crown could crumble so utterly (they fail to even make the playoffs that year, and haven’t returned since). Fans of literary non-fiction will find comfort in the plucky all-Americans suffused with the dusky glow of their two-light towns, and devour the portraits of coaches who command on-field respect but struggle in life and love.

Each chapter begins with a dash of the literary: a line from Ralph Ellison here, a lyric from bluesman Robert Johnson there. That’s as it should be: In a sport that strives for perfection when the odds are razor-thin, it’s only right that this ambitious book strives in the same way and, in doing so, it earns its claim as one of the most vital sports books in recent years.