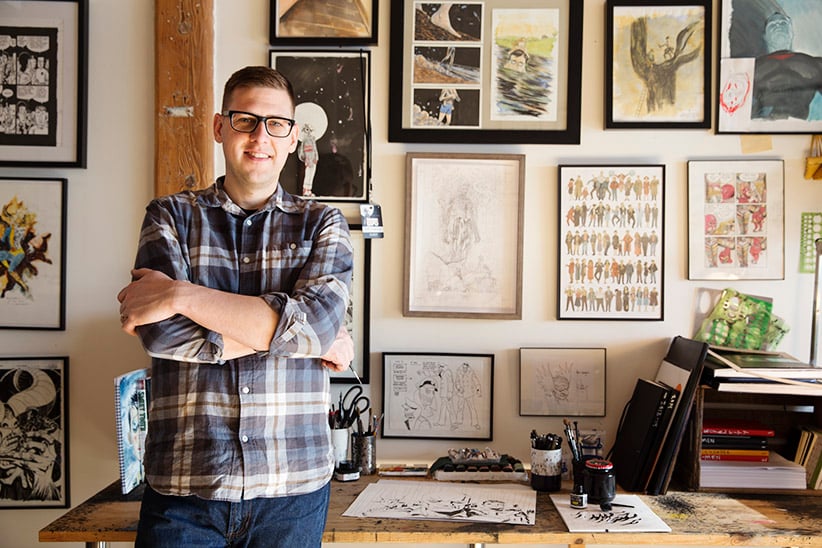 Artist Jeff Lemire in his studio. (Photograph by Kayla Chobotiuk)

One afternoon, 10-year-old Jeff Lemire bounded off the school bus, marched up the drive to his family’s farmhouse in Woodslee, Ont., and announced that he required a secluded place to work. Gathering up plank and nails, the future New York Times-bestselling graphic novelist scaled the huge maple that threw shade onto his father’s barn. With typical diligence, he hammered a seat between two branches.

In the months that followed, young Lemire spent every hour unclaimed by school, chores or sports perched up there—reading superhero comics, sending his mind elsewhere and creating his own stories. “Jeff just liked to be by himself with the quiet,” explains his mother, Mary Ellen.

Almost 30 years later, Lemire still craves solitude. In a modest studio tucked off Toronto’s Queen Street East, he logs eight to 10 hours a day bent over his drawing board. But he’s finding it harder and harder to get people to leave him alone. Success draws a crowd, and with Hollywood, CBC and book publishing giant Simon & Schuster all eager to share his stories, Lemire’s particular brand of success is on the brink of being impossible not to encounter. Soon, it won’t matter if you read comic books or not. You’ll have to climb a tree to get away from the guy.

Giller prize-winning author Joseph Boyden recalls vividly his first reaction to Lemire’s writing, “I thought, ‘Holy s–t—this is brilliant.’ ” Years later, Boyden has become a close friend. He still raves about Lemire’s ability to “take simple, classic stories and put his own stamp on them.”

At a glance, it’s hard to square such superlatives with the 39-year-old husband, father and comic book creator. Bespectacled and unassuming, Lemire seems entirely normal. In fact, he is a mutant. But not the sort with adamantium claws. His superpower is the ability to combine remarkable creative range, a Galactus-sized fan base and enormous critical appeal.

Lemire’s graphic novel Essex County was named by CBC as one of the decade’s five essential works of Canadian fiction. It was followed by a run of acclaimed comics including Sweet Tooth, The Underwater Welder and the sci-fi romp Descender. At the same time, fanboys celebrate Lemire’s superhero stories in Justice League, Green Arrow, Hawkeye, X-Men, the upcoming Moon Knight and Wolverine’s new solo title, Old Man Logan. Such diverse output places Lemire atop a new breed of crossover comic book star. He’s praised for his original, affecting graphic novels. And he’s a commercial smash thanks to his superhero scripts that others illustrate. He reigns as the four-colour Stephen King, half pulp hero and half critic’s darling. 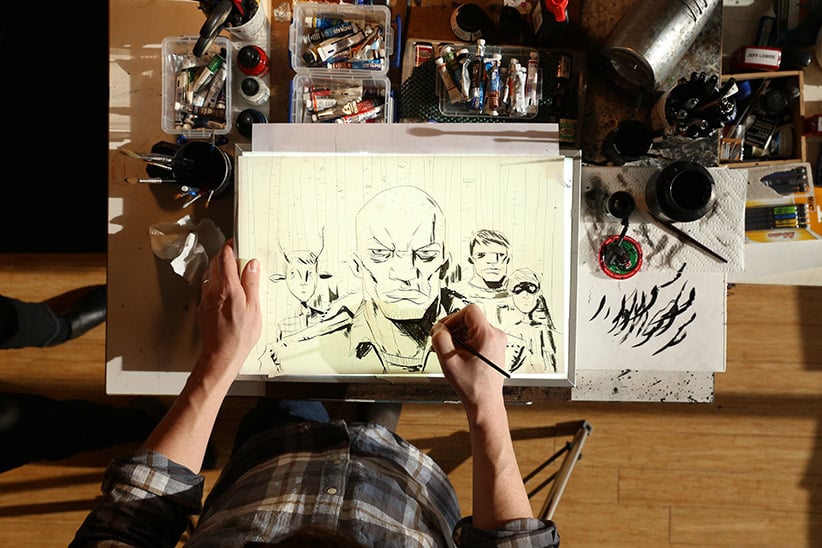 “Jeff is one of our most valued creators,” says Axel Alonso, editor-in-chief of Marvel Comics. In fact, by April, they’ll be counting on Lemire to crank out four titles a month. With each selling 50,000 to 100,000 copies, Lemire belongs to what Alonso describes as Marvel’s “core group of writers.”

He draws a different kind of applause from Simon & Schuster, who call his work “literary.” In October, they’ll release his forthcoming graphic novel Roughneck across North America with the full force of their marketing machine. A haunting story about a half-Cree former NHLer and his kid sister, it’s set in a fictionalized town in Northern Ontario. Lemire has made the area a second home—he and Boyden once took a 120-km snowmobile trek around James Bay. He’s come to know the people who live there, the concerns that occupy them and the cadence of their speech. All of that is captured beautifully in Roughneck. Atmospheric and raw, it is arguably the finest work of Lemire’s career. Kevin Hanson, the publisher’s Canadian president, certainly has high hopes. “Our job is to make Jeff a bestseller across the book world,” he says. Notice he does not say comic book world.

If there is indeed a superpower behind all this success, it is Lemire’s ferocious commitment to the pure task of telling stories. “If I can’t work every day, I’m not a very pleasant person,” he confesses. “I have to do it for my mental health.” It’s a compulsion that, by age 19, had led him away from the open spaces of the family farm. Eventually, he landed in Toronto where, as one of his characters would observe, you can be “completely alone . . . lost in a crowd.”

After an unsatisfying stint at film school, Lemire found a routine that suited him. By night, he would work in restaurant kitchens preparing food. By day, he would spend hours, pencil in hand, honing his skills. Or, as he describes it, “Writing comics that didn’t work, trying to be somebody else.”

This seven-year period reveals Lemire both as an artist and individual. Not once during that time did he send his work off to a publisher. It wasn’t ready, he says. “I was growing as a storyteller, but not finding my voice.”

That changed in 2006, when Lemire found inspiration in a familiar place. ‘It wasn’t until I did a story about where I grew up. All of a sudden, that’s when I found my voice,” he says. He found it, literally and creatively, in Essex County.

The three-volume graphic novel was a triumph. It tells a sweeping tale of people, place and loss that slips back and forth in time, slowly unveiling the sort of secrets rural folk try to keep locked away.

At the heart of the story are two characters readers can’t easily forget. Lester is a lonely boy in a Superman cape who relies on imagination to escape the pain of his mother’s passing. Lou is a griping malcontent living out his last days in a haze of memory and regret. Lemire admits that both characters are partial self-portraits. “Lou’s a misanthrope, like me. Happiest when he’s left alone,” he laughs. “And Lester, well, I was that kid in a lot of ways. Running around playing superhero.”

Essex County struck a huge chord. The New York Times called it “a rich tapestry” with “emotional wallop.” But comic books still aren’t everyone’s cup of tea. In 2011, fans were dismayed when the book was bounced from the CBC Canada Reads competition. Home decor diva Debbie Travis dismissed it as having “too few words.” To this day, Lemire doubts whether she even read it. Travis’s snobbery triggered a backlash that sent Essex County to Amazon’s top 10 list and won it the competition’s People’s Choice award. Lemire, grinning, says, “I have nothing but fondness for Debbie Travis.”

Essex County also signalled the emotional complexity that continues to dominate Lemire’s writing. Even his superhero work ventures into intense territory. A year-long Animal Man story saw the hero forced to withstand suffocating grief after the death of his young son. Like rainwater into barnboard, melancholy soaks through nearly everything Lemire writes. It’s an effect that’s only amplified when accompanied by his moody, trembling artwork. “The sadder the better,” chuckles Lemire.

He’s unafraid to tackle difficult topics and show “the ugly side of his characters,” adds his closest friend and fellow comic book writer Scott Snyder. Lemire’s turn on Moon Knight will feature an ambitious examination of mental illness. And he’s twice touched on the treatment of Aboriginal peoples, through Roughneck and Equinox, the Cree hero he created for DC’s Justice League United. “Jeff’s writing is extremely intimate,” argues Snyder. “Everything is lodged in character; that’s the propulsive force of his plots.”

This might help to explain why lonely, vulnerable children keep showing up. In addition to Lester, there’s Gus from Sweet Tooth, the kids from Plutona and the robot boy Tim-21 in Descender. It probably has something to do with being a dad. But Lemire says it’s more than that: “I like to write from a child’s point of view. Kids feel everything so intensely.”

Another aspect of Lemire that inevitably draws comment is his nationality. “His stories are prototypically Canadian,” insists Simon & Schuster’s Hanson. “But he writes Canadian stories that can travel.” Lemire sees it differently. “It’s not about being Canadian. It’s about setting a very specific location and that location informing the story.”

His appeal certainly reaches far. CBC recently joined forces with First Generation Films to put Essex County into development as a television miniseries. And last month, Sony Films assigned a screenwriter to adapt Descender, the rights for which they won in a heated bidding war. Virtually everything else Lemire has created is either optioned or under pursuit.

The one-time film student confesses some bemusement but avoids distraction. “The movie stuff is great, but that doesn’t legitimize my comics. To me, the comics are what’s important.”

Back in his studio, talk returns to that solitary boy high up in the tree. It’s a story Lemire once detailed in an Essex County short. He’s anxious that it not be misinterpreted. “Loneliness isn’t necessarily a sad thing,” he emphasizes. “I’ve always found it comforting.”

Soon after, the interview ends. Lemire moves toward his drawing board. He picks up a pencil and stares down intently at the page, relaxing visibly. Back alone. Back at work. Just the way he likes it.