Why we still care about Richard III 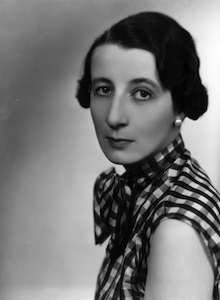 A 1934 photo of Elizabeth Mackintosh (1897-1952), who wrote mystery novels under the nom de plume of Josephine Tey. (Sasha/Getty Images)

So it was him after all. It was always likely that the bones of a man unearthed last September from beneath a parking lot in the English Midlands city of Leicester would be those of King Richard III. The most notorious monarch in English history—thanks to Shakespeare’s excoriating portrait of him as the man who murdered his young nephews and seized the throne—died at nearby Bosworth Field in 1485, the last English king to be killed in battle. The man under the concrete was found, more or less, where tradition said he would be. His skull was cleaved by something like an axe and there was a barbed arrowhead between two vertebrae; as well, he had severe scoliosis—just like Shakespeare’s “poisonous bunch-back’d toad.” On Feb. 4, archaeologists announced the promising indicators had been confirmed by DNA comparison with Michael Ibsen, the Canadian-born descendant of Richard’s sister, Anne of York. The bones belonged to Richard III.

It was a happy moment for the king’s many defenders; the Ricardians, as they’re known, hope the discovery will spark renewed interest in Richard, leading to a reappraisal of his legacy and progress in their search for evidence that sees the king declared innocent among historians and in the popular imagination of the crimes ascribed to him. The reason Ricardians care so much, and have risen so far—the main group can boast of royal patronage (the duke of Gloucester, no less, who bears the same name and title Richard did before he assumed the crown)—as to be able to successfully press for the Leicester dig, is essentially the story of a 62-year-old book slimmer than a Harlequin romance, a detective story that became of one of the 20th century’s most unlikely pop culture phenomenons.

The Daughter of Time—a title taken from Sir Francis Bacon’s aphorism that “truth is the daughter of time, not of authority”—was written in 1951 by Josephine Tey, a pseudonym for author and playwright Elizabeth Mackintosh, a year before her death. In it, Scotland Yard Inspector Alan Grant is going mad with boredom from being laid up in hospital. Knowing his reputation for being able to “read” criminals by their faces, a friend drops off some portraits, including one of Richard III. Instead of an infamous murderer, Grant sees “someone used to great responsibility, someone too conscientious.” Intrigued, he pores over books and ancient documents, and concludes that the true villain was Bosworth’s victor, Henry Tudor, whose dynastic propangandists, including Thomas More and Shakespeare, turned Richard into a misshapen monster guilty of everything from ruling as a tyrant to poisoning his wife so he could marry his niece.

The effect of the book—it was voted the greatest mystery novel of all time by the prestigious British Crime Writers’ Association in 1990—was immediate and long-lasting. Once of interest to a handful of ignored cranks, Richard exploded into popular consciousness. The Fellowship of the White Boar, a Ricardian group started in 1924 by a Liverpool surgeon, was so inundated with new members post-Daughter that it changed its name to the more respectable Richard III Society. (Its website has a section devoted to Tey and her influence.) Across the Anglosphere the king once famous only for the line “A horse, a horse, my kingdom for a horse,” was the subject of serious discussion for years afterwards. In 1958, Winston Churchill, skeptical of Tey’s arguments, nonetheless paid tribute to the way she had swayed popular opinion in his A History of the English-Speaking Peoples. Even fellow fictional detectives took note of Grant’s work. In New York, Rex Stout’s fat bibliophile Nero Wolfe, pulled More’s Utopia off his shelves because he now believed More had framed Richard.

Churchill was not alone in his doubts. Academics have since skewered Tey’s logic, especially the way Alan Grant picked and chose evidence to reinforce the “Richard good, Henry bad” thesis. But there is no doubting that Tey brought new blood, new research and new respectability to Richard. Now the Ricardians can open a new front in their war: finding a proper resting place for England ’s most controversial king.