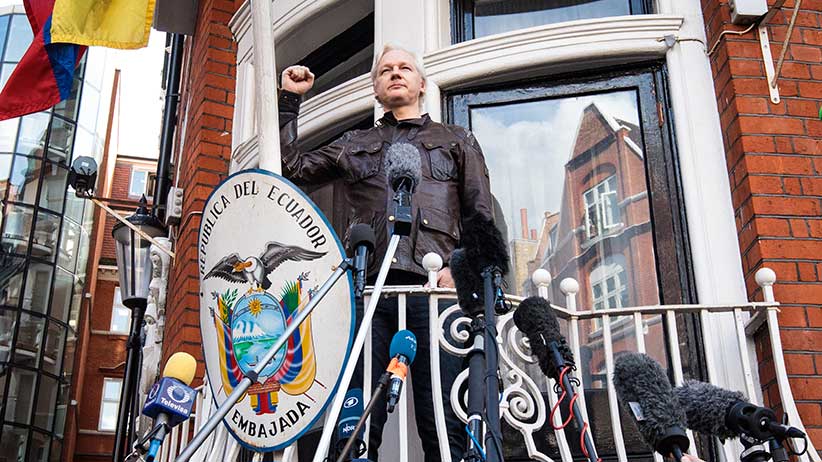 Julian Assange in May 2017 (Photo by Jack Taylor/Getty Images)

Andrew O’Hagan’s portrayal of Julian Assange in his London Review of Books article “Ghosting” is definitive, and frequently uproarious. O’Hagan was a passionate devotee of WikiLeaks, or at least the rose-tinted idea of it, when he began ghost-writing Assange’s autobiography, which never did get completed. “Those of us who grew up . . . under Thatcher and Blair, those of us who lived through the [Irish] Troubles and the Falklands War, the miners’ strike, the deregulation of the City, and Iraq, believed that exposing secret deals and covert operations would prove a godsend,” he writes.

After months and years of late-night conversations with Assange, the Scottish O’Hagan—one of Britain’s finest essayists, and a regular contributor to periodicals on both sides of the Atlantic—decided he had to write his own, in-depth version instead, included in his new book, The Secret Life: Three True Stories of the Digital Age. Everything is illuminated, not least Assange’s mania and totalitarianism. “He is thin-skinned, conspiratorial, untruthful, narcissistic, and he thinks he owns the material he conduits,” O’Hagan writes, “abusive and monstrous in his pursuit of the truth that interests him . . . He is probably a little mad, sad and bad.” Assange is incapable of collaboration, O’Hagan adds. “When he was working with those fellows from The Guardian, The New York Times and Der Spiegel, he allowed himself to forget they were journalists with decades of experience and their own fund of beliefs. To him they were just conduits and possible disciples: he is still reeling, even today, from the shock that they were their own men and women.”

READ: Inside Julian Assange’s world, the moving target of ‘Risk’

The Secret Life combines ”Ghosting” with two more of O’Hagan’s detailed London Review of Books essays on modern times, “The Invention of Ronald Pinn” and “The Satoshi Affair.” “Invention” vividly explores how people can shift identity and buy very dangerous weapon on the dark web. “Satoshi” looks at Australian eccentric Craig Wright, who may have invented Bitcoin and who exemplifies, O’Hagan said in our interview, the Internet’s “habit of self-dramatization and self-concealment all at once; it’s new sort of persona.” This conversation has been edited for length.

Q: Marianne Ny, the Swedish prosecutor, stated in May: “I can conclude, based on the evidence, that probable cause for this crime still exists,” and Alex Gibney retweeted her. When I interviewed Gibney on the release of his WikiLeaks documentary We Steal Secrets, he said Assange is “All about holding others to account, holding the powerful to account. And he, in relation to these two Swedish women, has power . . . he’s not willing to be held to account in any way, shape or form, and that’s one of the issues I have with Assange and WikiLeaks.”

A: That’s been my finding, unfortunately, after many, many months with Julian. And I’m talking as someone who works from a basic support of WikiLeaks, from a basic admiration of their attempts to speak truth to power. But his personal failure to allow the speaking of truth to power in his own case, his acknowledgement of power in relation to these women, robs him of integrity. It actually closes down the possibility of him being a serious advocate of freedom of speech. That’s a traversing of the moral universe in my head, to go from the person who’s asking that all powerful people be held to account and reveal the truth, the refusal to step into an arena where you yourself can be held accountable. He achieved nothing by staying in the embassy except to slowly drain away massive support for WikiLeaks.

Q: Assange refused to directly discuss the Swedish allegations with you. The Secret Life covers this matter somewhat elliptically. Sarah, his girlfriend and long put-upon manager during your ghosting period, told you: “He’s got such appalling, sleazy stories about women you wouldn’t believe it.” At the start, Assange boasted he wanted the phrase “Swedish whores” used disrespectfully in the book’s title.

A: I’m not, and neither would you, going to add everything up outside a courtroom and come to an assessment of his guilt or not. As for him being a sleazy character as his then-girlfriend said, and as I reported, and his attitude towards women generally, I wouldn’t make further comment on that simply because, in the absence of a judicial process he has disallowed, I don’t want to then comment on one man, judge and jury on that. I think my readers, and your readers, will draw their own conclusions.

Q: “The Satoshi Affair” is about Australian Craig Wright, who may have invented bitcoin. Any more weird Australians interest you?

A: Every day there’s another one heading my way. I now attract them. Basically, I’m now perpetually stalked by every mid-aged Australian man who is burdened with a difficult past and a big idea.

Q: Let’s switch to the U.S. One of the reasons American journos didn’t see Trump coming is, unlike you, too many of them have had limited exposure to culturally working-class people.

A: That’s a smart point. I don’t claim often to see what’s coming, but I do know how disaffected people think. I grew up in a community like that. I come from a big family. I knew Trump would win because I knew he is what poor Americans think a rich person looks like. And I knew that Hillary Clinton would annoy voters in their tens of millions, because she basically sucked at communicating with poor people and seemed like a person who’d been powerful and rich for decades. She was a disastrous candidate. I mean, she was up against a psychopath and she still lost. The country’s thinking was beyond her, literally.

Q: When I interviewed him for Maclean’s, Richard Ford told me, “Paul Ryan, he is the real evil genius of the Republican party. He with his little hateful widow’s peak and his smirky, snarly, simpering non-entity self, that’s who I detest. Trump’s just a moron, but Ryan is ugly and evil.” What are your thoughts?

A: I like Ford’s point: it’s got a sufficient degree of anger in it. The Republican Party is to blame for this mess. It cultivated something horrible and sociopathic, something that lies well beyond its own values, and indeed sets its own values back by years. The Republicans have never been my cup of tea, but I’ve lived through many of them and never thought they were insane before. Ryan is the modern face of white delusion and corruption in America. He is setting the country against itself. If you actually move around for a bit in the U.S., and look at the situation of black people, your mind boggles that there is not a riot in every city every night. People like Ryan have set the country back decades, and the makings of a civil war are again present.

Q: Your New York Review of Books essay on Eminem first got me into your work. His working-class rage straight outta Michigan, and “Who Knew” on American violence, seem zeitgeisty.

A: I think Eminem’s voice is singular: it told us what was happening. We’re still finding out what he meant. The post-‘60s situation — that your parents’ liberties and culture wars didn’t make life better, and might have made things worse — is there in his lyrics.

Q: You’re a socialist who praised riding Uber in The New York Times Style Magazine. Is that F. Scott Fitzgerald’s idea that good writers inhabit both sides of the argument at the same time, and not go crazy?

A: Fitzgerald knew it was true: he died of how true it was. I’m not interested in writers who are overcome with certainty, with single-mindedness, or with a sense of how consistent and morally upstanding they are. My writers are in the thick of it and they seek the truth, rather than embody it, and sometimes they find truths that don’t sit palatably or easily together. That’s life. That’s personality. And that’s writing.

Q: “Love gets all the big headlines, but friendship is where the action is, especially if you consider that it is really a lack of friendship that makes an unhappy marriage,” you wrote. What do you hope people take away from that New York Times Style Magazine column?

A: It’s nice occasionally to think you might be capable of writing something that helps people with their day. I’m too impatient to be properly helpful but I’m intrigued by the power of images and words to open people up and bring them into a community of feeling. I don’t have as much time as I’d like to write those essays in America, but I’ll always keep my hand in. If nothing else, I like to think they throw a small spanner into the machinations of the right-wing bafflement enterprise that is the current state.

A: I spend all my pre-writing hours avoiding psychoanalysis and Catholic priests. So I eat porridge. I do a few stretches. I think about cigarettes but don’t smoke them. I listen to some jazz. Then I fall asleep. And when I wake up the screen is magically filled with writing. Lucky, huh?