LGBTQ people and 'the harm being done by the Christian religion' 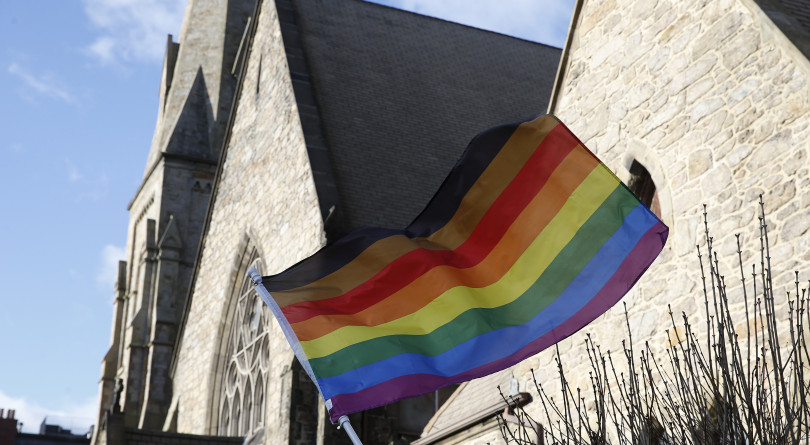 An LGBTQ flag flies over a methodist church in Boston on Jan. 5, 2020 (Jessica Rinaldi/The Boston Globe via Getty Images)

The issue of LGBTQ2 equality, the full acceptance of gay people, and the performing of same-sex marriages are perhaps the most divisive issues facing contemporary Christianity. Indeed for many conservative Christians, the litmus test for faith is less a belief in Jesus Christ than a rejection of homosexuality, which is bizarre in that the subject is hardly ever mentioned in the entirety of Scripture, and Jesus never refers to it at all!

Some denominations have already become what is often known as “affirming”, others are almost at that stage, but most evangelicals—a deeply significant group in the U.S.—remain steadfastly conservative. The Roman Catholic Church states in its catechism that “homosexual acts as acts of grave depravity” are “contrary to natural law,” and that “homosexual acts are intrinsically disordered,” but most informed commentators believe that at least a third of all priests are gay, not all of them celibate.

Father Donald Cozzens argues in his 2000 book The Changing Face of the Priesthood that as many as 58 per cent of priests are gay, and that the rate is higher for younger priests, yet Rome still denies and obfuscates. That stance continues to cause great pain and suffering.

A new book on the subject, Misguided Love: Christians and the Rupture of LGBTQI2+ People from Charles Fensham is the latest to address the theme, and what makes this volume so unusual and significant is that its author is not known primarily as an activist or a journalist but as an academic theologian.

Fensham is professor of systematic theology at Knox College, University of Toronto, the author of highly praised books and articles, and an ordained Presbyterian minister. He has taught theology since 1983, beginning in his native South Africa but coming to Canada after being harassed and raided by the security police. He spoke to Maclean’s about the harm being done by the Christian religion, confronting hatred and what needs to change.

Q: Why now for this book?

A: My response to this question is both personal and social.  For me this book project began with a late Fall day in 2010 when I stood on the edge of a lake in Northern Ontario and seriously considered taking my own life.  The inner rupture between the teaching and attitude of my church and my experience as a gay man became unbearable.

As a theologian and tenured professor, my mind could grasp that the church is wrong, but my heart could not get there. I also realized that this experience is real for many sexual and gender minority people of faith and that I needed to address it.

As my research commenced, I discovered that things were worse than I anticipated. The research of Peter Newman and Sophia Fantus at the University of Toronto, Social Work has shown just how vulnerable LGBTQI youth are in religious schools in our city.  The harm being done by the Christian religion right now in our Canadian context remains staggering.  This needed to stop, and I needed to create a resource that addressed the hatred and anger against sexual and gender minorities in religious contexts.

Q: Why is it that a subject that features so seldom in the Bible—homosexuality— seems so vital to conservative Christians?

A: The British historian Alexandra Walsham describe this kind of Christian attitude of aversion, passive aggression and bullying as charitable hatred.  As I follow you on Twitter, Michael, I see how this form of hatred is expressed daily against you as an ally.  The reasons for this form of religious hatred are complex.  In my book I explore a combination of causes for this.  I believe it involves factors including the long history of hatred, live burning, drowning and torture of sexual and gender minorities in the name God.  This is combined with our emerging understanding of the social bias through the work of Jonathan Haidt, Mary Douglas, Julia Kristeva and the scapegoat theory of René Girard.  Shaped by a traditional hostile social environment and internal psychological factors conservative Christianity erroneously sees an affirming welcome of sexual and gender minorities as a moral failure.  The psychological factors and the experience of disgust they engender are combined with a reading of the bible that is shaped by these pre-conditions, lead to so much anger and ultimately harm.

Q: How much damage has been done to LGBTQ2 people over the years by this teaching?

A: One of the objectives of this book, and the central section of it, is to tell the story of the rise of Christian hatred of sexual and gender minorities from early Christianity through the medieval period, the Protestant Reformation to today.  In the book I share carefully researched stories of profound harm.  It is simply shocking to discover the torture, live burnings, the public castrations and hangings, the beating on the wheel, and the killing of young teen boys as objects of the hatred of Christianity.  This is true for both Roman Catholic and Protestant Christianity.  The damage is profound and continues.

Q: My reading is that the verses usually quoted to condemn gay people are taken out of context, are anarchistic or simply wrong. Would you agree?

A: The famed conservative Rabbi and Biblical Scholar Jacob Milgrom has pointed out how Christians willfully misread the texts in the book of Leviticus often cited against “homosexuality.”  The English translations of these texts have problems, and the context is not properly considered.  It turns out that those texts speak about marital infidelity in a patriarchal context.  An extensive and credible literature exists today that shows that every single biblical text used to condemn “homosexuality” is interpreted through a profound bias that does not consider the context and time.  My book also unpacks the story of the rise of the myth of Sodom and its association with homosexuality.  That ancient story has nothing to do with people who are sexual and gender minorities and everything to do with the use of rape and inhospitality to subdue others.  Many people, still shaped by the biases described above, insist that the Bible condemns homosexuality.  Yet, the statement that the Bible condemns homosexuality is simply wrong.

Q: Do you think change is likely to happen—especially in the evangelical and Roman Catholic world?

A: Changes are happening. When faithful people who carry Christian hearts of compassion within the Roman Catholic Church and in Protestant Evangelicalism hear and see the stories of harm, they question their attitude.  When they go back to Biblical arguments with open hearts, they discover just how much of the interpretation they assumed have problems. When they meet faithful Christians, who are sexual and gender minorities, they discover a new fellowship of love.

So, yes, changes are happening.  Of course, it depends very much on each of these denominational and social environments how far changes will go. Roman Catholicism is unlikely to support marriage equality because marriage is a sacramental doctrine.  It is also a tradition that does not acknowledge doctrinal change directly, but rather, by means of reinterpretation and pastoral guidance things change slowly.  That process of change is happening. Within Evangelical circles there is no doubt that charitable hatred and harm will continue, but the hope expressed by means of this book is that hearts will change, and harm will be reduced.