A review of 'Northern Dancer: The Legendary Horse that Inspired a Nation' by Kevin Chong 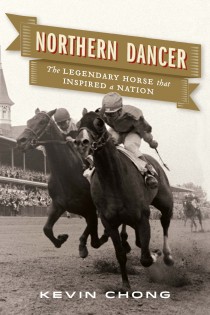 NORTHERN DANCER: THE LEGENDARY HORSE THAT INSPIRED A NATION

In 1964, Canada didn’t yet fly the Maple Leaf. Instead, the Red Ensign, which included the Union Jack, served as the country’s flag. Caught between the influence of Britain and the U.S., Canadians felt an “uncertain sense of patriotism,” Chong writes, finding a dearth of icons to call their own. So when a plucky, Ontario-born colt won two of the world’s biggest horse races that year, the country naturally latched onto him.

Chong structures his story around the characters that orbited Northern Dancer, starting with owner E.P. Taylor. The tycoon is described as an affable man of integrity, though unpopular with many Canadians, who saw his ubiquitous business ventures—as a beer baron, a real estate magnate, president of a huge holding company—as a sign of greed. But the public warmed to Taylor as Northern Dancer won the Kentucky Derby, the Preakness Stakes, and made a bid for the Triple Crown (he came in third at the Belmont Stakes). “You’ve made it when kids put you up there with household words like Mahovlich and Howe,” Taylor told the Globe and Mail triumphantly. “Now Northern Dancer is part of the lingo of the land.”

Chong also chronicles the contributions of trainer Horatio Luro, an Argentine playboy who prohibited riders from striking Northern Dancer and who duped reporters with a stand-in pony so the thoroughbred could have some peace before running at Churchill Downs. Even more compelling is the book’s account of jockey Bill Hartack, a crotchety soul who hated the media, and a hard-luck guy who saw in Northern Dancer a kindred underdog, driven to prove himself. “He’s all blood and he’s all gut,” Hartack once said of the horse.

But Chong’s strongest storytelling comes in his recreation of the races, particularly the Derby. “A bell rang. The iron gates opened. Startled by the open dirt track, the horses crashed out before collecting their stride.” Though you know the outcome, you hold your breath as Hartack taps Northern Dancer on the shoulder, the only place Luro allowed, and the horse is unleashed, “his short, powerful legs making like a hummingbird’s wings.” Chong laments the bygone era when “racehorses could be television stars and jockeys appeared on the covers of national magazines.” Today, “people know horses to be beautiful but they no longer understand the expression of that beauty.” This book is a nice reminder.