Book review: Growing Up Confused in an Arab American Family 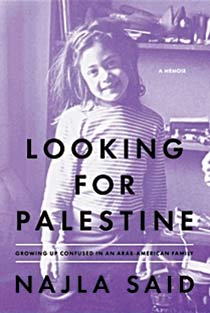 Looking For Palestine: Growing Up Confused In An Arab American Family

“I am a Palestinian-Lebanese-American Christian woman, but I grew up as a Jew in New York City,” writes the author at the opening of this memoir. The daughter of celebrated literary scholar Edward Said was born in 1974 and lived on the Upper West Side of Manhattan throughout her childhood, where she became versed in Yiddish idioms and ate bagels and lox on the weekend. When friends assumed she was a Sephardic Jew, she didn’t always correct them—surrounded by so many negative images of Arabs, she preferred to keep her background quiet.

But gradually Said discovered that denying her roots, her deep attachment to them, was no solution. Returning from a tour of France at age 17, she was pulled aside at the airport and quizzed about her family’s origins. Her friends’ reassurances provided little comfort. “You’re so not Arab, Najla!” they told her. “You don’t even look it!” Visiting a refugee camp in Gaza the following summer reinforced her confusion, as well as the eating disorder she developed after her father was diagnosed with leukemia (he died in 2003). “I wanted desperately to suffer, not just for my daddy but for all of Palestine . . . How could I [eat], when others who were just like me in every other way were unlucky enough to be born into nothing?”

In the wake of 9/11, after procrastinating for months, Said found the courage to join an Arab-American theatre group. She found renewed pride in her identity, and ultimately wrote the play this memoir is based on.

Did she find Palestine? Perhaps she’s still, in some ways, looking. She has visited her father’s homeland only once, on a family trip in 1992. While there, Edward, a long-time Palestinian-rights advocate, put his arm around his daughter. “It’s my generation that’s messed it all up,” Said recalls him saying to her back then. “We are too connected to the events of ’48 and ’67 . . . until we’re gone—my generation, the Sharons and Arafats and all of us—nothing’s going to get done. It’s up to your generation to fix it.”